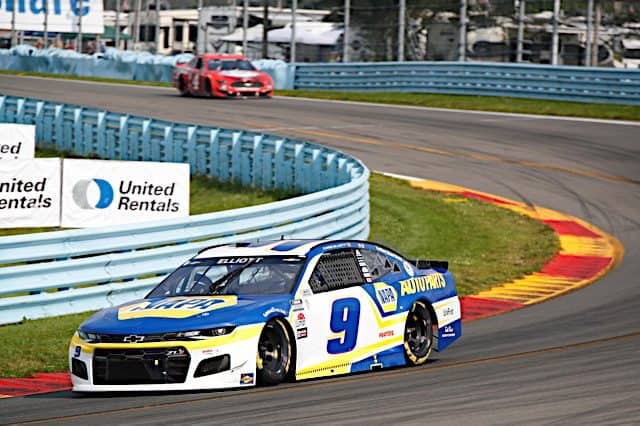 While no race in the NASCAR Cup Series guarantees a good finish for any driver, Chase Elliott had to feel confident about his chances at Watkins Glen International.  Elliott had won the last two races at The Glen, both during seasons in which Hendrick Motorsports was experiencing a bit of a slump.  Since his last trip to the Finger Lakes, Elliott has won a Cup Series championship and five more road course races.  NASCAR’s long-awaited return to Watkins Glen gave Elliott a great chance to earn a victory and all-important playoff points for the upcoming postseason.

However, the past race weekend suggested that Elliott and the No. 9 team may have a problem.  No, the issue is not that Hendrick teammate Kyle Larson claimed another victory and padded his own playoff point total.  Elliott and his team looked off their game on Sunday (Aug. 8), beset by pre-race inspection issues, poor strategy and a costly on-track mistake.  By the time the No. 9 team got its act together, Elliott was the fastest car on the track.  Yet he had to make up so much ground at the end of the race that he ultimately ran out of laps trying to catch Larson and had to settle for second.

“I made too many mistakes to get the win, unfortunately, and made it too late in the race,” Elliott said.  “[I’m] super proud of our team, [it was] kind of an uphill battle all day, but everybody was just super prepared coming into the day, and our Napa team just did a really good job of fighting it.  If I hadn’t have let them down there, I think we might have had a shot at it.”

The mistake Elliott is referencing occurred during the second stage.  While working his way through traffic, he jammed on the brakes approaching turn 1, causing his Chevy to slide forward and flat spot the tires.  The damaged Goodyears began to impact the No. 9’s handling too much, forcing Elliott to make an unscheduled pit stop for fresh rubber.  The incident dropped him outside the top 30, where he remained through the end of the stage.  As a result, the No. 9 team had to spend the rest of the afternoon playing catchup.

That said, Elliott’s post-race comments were a little hard on himself.  While the extra pit stop may have been the difference between winning and losing, he was not the only person on the No. 9 team who made a mistake.  In fact, Elliott’s comment about his team being “super prepared” was quite perplexing.  From before the race began to the end of the stage two, the whole No. 9 team looked completely lost.

The trouble began with pre-race inspection, where NASCAR officials issued an L1 penalty for an undisclosed technical violation.  The penalty resulted in the ejection of crew chief Alan Gustafson, a 10-point deduction, a $25,000 fine, and the loss of Elliott’s starting position.  This infraction, by the way, comes on the heels of a separate engine usage penalty NASCAR issued on July 22 against Elliott and teammate Alex Bowman.  Elliott has lost a total of 35 points from those two penalties, plus additional points forfeited from a disqualification at Nashville Superspeedway in June.  As a result, Elliott has fallen from third to sixth in overall points over the last seven races, a stretch that includes a victory at Road America.  Hendrick Motorsports has undoubtedly shown improvement in 2021, but the No. 9 team has been far from perfect.

Even once the race got started, it was clear the loss of Gustafson complicated things for the No. 9 team.  Trying to fight through traffic in stage one, Elliott struggled to make up ground.  As others pitted right before the end of the stage, he was able to climb to eighth and earn three stage points.  But fill-in crew chief Tom Gray called the No. 9 back to pit road under the stage one caution, even though Elliott had also pitted under the competition caution 10 laps earlier.  That stuck Elliott back in the pack again when stage two began, and he made minimal gains before flat spotting his tires.

Meanwhile, other drivers used the early cautions to leapfrog their competition more effectively.  Chase Briscoe and Ricky Stenhouse Jr. were both able to begin the second stage inside the top five after staying out during the stage one caution, despite starting deep in the field.  Christopher Bell was even more successful at working his way through the pack.  Like Elliott, Bell had to start the race in the rear after an L1 penalty in pre-race inspection.  But thanks to a fast car and smart strategy, the No. 20 was second by the end of stage two and ready to battle Larson and Martin Truex Jr. for the win.  Had Larson not accidentally spun Bell during the third stage, Elliott might have run out of time to catch him as well.

Even though he recovered very well in the race’s final laps, Watkins Glen still feels like a missed opportunity for Elliott.  In a race where many considered him to be the favorite, he left here without the victory or any additional playoff points.  By comparison, Larson added another five playoff points to his total, bringing him to 37.  Truex is second in the playoff grid with 20 playoff points, one of which came via a stage win on Sunday.  The other playoff point went to Joey Logano, who finished poorly but held on to the fifth spot in overall points by 11 over Elliott.  Fourth through seventh in the standings are now separated by just 39 points with three races left in the regular season.  Thanks to the No. 9 team’s penalties, Elliott is right in the middle of that battle instead of in front of it.

Elliott often takes responsibility for the shortcomings of his team, like he did on Sunday.  But it is worth wondering if he would have made the same error if HMS had put him in a better position.  NASCAR is very much a team sport, and it was a series of mistakes that took away a potential win from the No. 9 team at Watkins Glen.  With the postseason rapidly approaching, the defending champs have some work to do.

I guess working for HMS is like a civil service job. You keep your job no matter how incompetent you are. Alan Gustafson has been crew chief at HMS for Kyle Busch, Jeff Gordon and Chase and has only one championship. Time for Chase to man up and demand a change. Chad is right there.