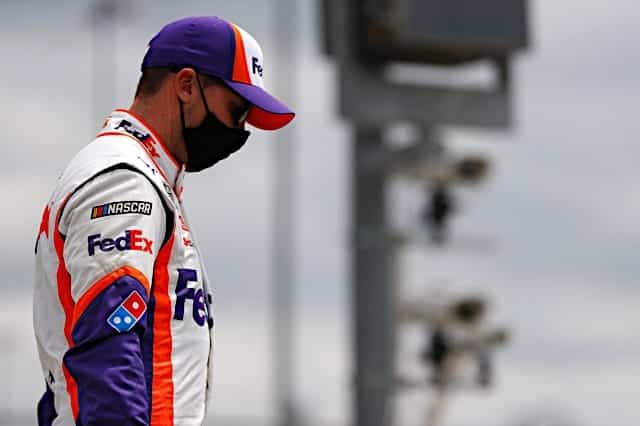 In addition to being a future Hall of Fame NASCAR Cup Series driver, a father, a charity runner and a basketball league commissioner, Denny Hamlin added a significant title to his résumé this year by becoming the co-owner of 23XI Racing with NBA legend Michael Jordan.

Now, there’s the possibility that Hamlin could wear one more hat: track owner or manager.

After 60+ years of racing, Southside Speedway in Chesterfield County, Va. was unable to hold a single race in 2020 thanks to the COVID-19 pandemic. Finally, in December of last year, the track announced it was closing its doors and selling the land.

The track owners had seen dormancy before and survived talks of selling and redevelopment. But this time the track actually sold, with the county being approved to buy it back in June of this year.

That track is where it all started for Hamlin, a Chesterfield native. He wanted to race at Southside back when he was just three years old, and eventually, he did.

“All I wanted to do was be one of those late model drivers at Southside,” Hamlin told NBC Sports. “If I could do that then I was gonna be happy with how my life ended up.”

The track was just one piece of the catapult that launched the 44-time Cup winner to stardom. To pay it back, he hosted a charity race, the Denny Hamlin Short Track Showdown, at the track from 2008-10.

That event pitted Cup stars like Hamlin, Kyle Busch, Tony Stewart and Joey Logano against local late model drivers. The last Showdown at Southside had an up-and-coming driver in it named Bubba Wallace, who had yet to make a NASCAR national series start at the time and ended up driving for Hamlin in Cup 11 years later.

But also 11 years later, Southside is now as dead as a doornail and probably going to be demolished, with the land used for a to-be-determined purpose. Unless …

Hamlin said back in April that he’d thought about taking over the track someday, but that it didn’t make financial sense and he hadn’t had any talks with anyone from Southside about doing so.

“I haven’t engaged with anyone about it,” Hamlin said. “No one’s really approached me about it. … I don’t mind losing a little money, but I’m not going to lose a ton of money.”

But four months later, and perhaps four months closer to the track’s impending doom, Hamlin’s tune changed during a media availability this past weekend at Watkins Glen International. My Frontstretch colleague Davey Segal got this from Hamlin.

? “It certainly shouldn’t die. It’s too good of an area. I’d like to try a few different things to see how we can get people out there.” – @dennyhamlin

He says he’d be seriously interested in helping run Southside Speedway and having a conversation with Chesterfield County. pic.twitter.com/BNmQJ81c2m

“It certainly shouldn’t die,” Hamlin said. “It’s too good of an area. I’d like to try a few different things to see how we can get people out there.”

Though Frontstretch was unable to get further quotes from that availability, I clarified with Segal, who said Hamlin is looking to have a conversation with the county because the land and racing history are both rich there. Hamlin would “definitely” be open to track management and ownership, believing the track should be kept alive.

The racing history Hamlin is referring to isn’t just his own. It isn’t just the decades of late model, street stock, modified, etc., racers that have raced at the track.

The track hosted the Cup Series from 1961-63, with Junior Johnson, Jimmy Pardue, Jim Paschal and Ned Jarrett winning the four races there. NASCAR Hall of Famers Richard Petty, Joe Weatherly, Buck Baker and Wendell Scott were in those events as well.

After its Cup days were over, Bobby Allison and Darrell Waltrip cut their teeth at Southside before their Cup careers started. Allison raced there long after he became a NASCAR star, staying at the track owner’s house when he would visit.

Southside was a home track for Ray Hendrick, who belongs in the NASCAR Hall of Fame, and his legendary Flying 11 paint scheme. That scheme and Hendrick’s family continued racing at the track long after his death.

My personal hope is that Hamlin does step in and, if he doesn’t outright buy or manage the track, help get it in the hands of people that will. Not just because of Southside’s place in NASCAR’s history, but because it is my home track — I grew up 20 miles from it.

I went to races there from the time I was a teenager until its closing. One summer, when I was between jobs, I worked as the track’s videographer. So biasedly, selfishly, I hope this track is saved.

I was at Myrtle Beach Speedway for its final event. I saw how sad the racers and regulars were that the track was going to be torn down. I can’t handle Southside Speedway becoming an episode of Dale Earnhardt Jr.‘s Lost Speedways as well.

Chesterfield County just bought the track at $4.5 million. That’s a lot of money to throw down, even for someone like Hamlin. But maybe there’s a way some of his longtime backers, like FedEx, Toyota or SportsClips, or some of his new 23XI sponsors, like DoorDash or DraftKings, could help foot the bill.

Maybe Hamlin could lease the track from the county for a fraction of the costs, like Speedway Motorsports did to host a NASCAR weekend at Circuit of the Americas. Maybe there’s some way he could get Richmond Raceway to help out in the same way Bristol Motor Speedway is with Nashville Fairgrounds Speedway. Having a successful weekly racing track would only help develop more race fans to fill the seats at Richmond.

It’s certainly easier for me to spend other people’s money, but it’s hard to find someone in the racing community better connected than Hamlin. He was recently in a Post Malone music video, and did I mention he started a race team with a guy who was teammates with both Dennis Rodman and Bugs Bunny?

By Hamlin’s comments from this past weekend alone, he proved that a lot can change in four months. Hopefully, four months from now, the future of “The Toughest Short Track in the South” is looking more optimistic thanks to its greatest success story.

Help Southside, Denny Hamlin. You may be its only hope.

Wishful thinking. That track was on borrowed time for years.

The only thing he should be worried about adding to his resume is “champion”.

Bring some open wheel in there a couple times a year. Fix the turns so you have a second grove. This place has the potential to be a fantastic race track. Don’t let it die Long time fan

I hope Denny can work out a long term lease just like langley speedway. Hopefully the city will work with him. He’s a smart guy, he can run or

I lived about 5miles from that track and grew up going there with my family back in the late 70’s although I didn’t know anything about racing at the time.I hope it can be saved !!