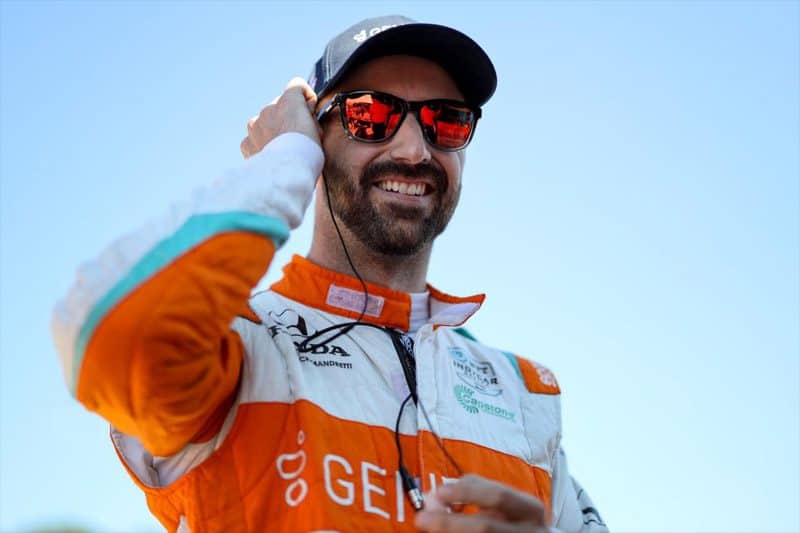 For several decades, the relationship between NASCAR and the NTT Data IndyCar Series has been a mutualistic one for both fans and drivers alike.

Even though the two series feature different cars, different race setups and different championship formats, the one thing that hasn’t changed is the occurrence of drivers exchanging starts in both series. Legendary names like Mario Andretti, A.J. Foyt, Mark Donohue, Dan Gurney, Dario Franchitti and Juan Pablo Montoya have logged hundreds of laps in both series. We have seen drivers do double-duty in the Indianapolis 500 and Coca-Cola 600 before, such as Kurt Busch, Tony Stewart, Robby Gordon and the late John Andretti.

James Davison, Santino Ferrucci, Conor Daly and RC Enerson have been the most recent IndyCar drivers to wade into NASCAR’s waters. This weekend, at the Indianapolis Motor Speedway road course, Sage Karam will add his name to the list when he makes his NASCAR Xfinity Series debut for Jordan Anderson Racing.

With that being said, who else from IndyCar, full time or part time, might try their hand at making a NASCAR start someday? Here are five potential candidates.

The Mayor of Hinchtown is still chugging along. He’s currently running his first full IndyCar season since 2019 with Andretti Autosport.

James Hinchcliffe scored a much needed third-place finish in the Music City Grand Prix last weekend, boosting his case for a 2022 drive. However, if things don’t work out there, he could seek a ride in NASCAR instead and add his name to the long list of drivers who have done so.

When Hinchcliffe was reduced to a part-time schedule for 2020, rumors spread that he was in the works of racing a one-off road course race in Xfinity or the NASCAR Cup Series, even engaging with fans on social media about the possibility. But nothing ever came of it.

With NASCAR and IndyCar sharing a doubleheader weekend at the Indianapolis road course, it will give fans a premiere insight to a potential tradition brewing between the two series. Should Hinchcliffe be given the opportunity to jump into an Xfinity or Cup car, Indy could be the perfect place to make it happen.

Roger Penske has a knack for hiring championship-caliber drivers. Simon Pagenaud has proven to be one of them.

Since joining Team Penske in 2015, the Frenchman has won 11 races, including an Indianapolis 500 win in 2019 and winning the 2016 championship in dominant fashion. He definitely seems to be comfortable in the IndyCar world, especially with a championship-winning team like Penske.

Making a NASCAR start may not be an immediate plan of his for now. But here’s the kicker: Austin Cindric is confirmed to move up to the No. 2 Cup car for Penske in 2022, leaving the No. 22 Xfinity car vacant for the time being. Should Penske be unable to hire a full-time driver, he could turn the No. 22 into an all-star car with rotating drivers.

Perhaps Penske should reach down into his IndyCar roster and give Pagenaud the chance to take the green flag in an Xfinity Series race. Having an IndyCar champion and Indy 500 winner like him in the field would be a treat for the fans.

A fellow countryman of Pagenaud, French driver Romain Grosjean is in the midst of his rookie IndyCar season after finishing a 179-race career in Formula 1.

Driving for Dale Coyne Racing with Rick Ware, he sits 16th in the standings with one podium, one pole, three top-10s and an average finish of 12.5 in eight starts this year, all of which have come on road courses or street circuits.

Fortunately for Grosjean, the best chance he has at making a NASCAR start lies with his team co-owner Rick Ware, who fields multiple entries in the Cup and Xfinity series. If granted the opportunity, he’d join the list of drivers with starts across Formula 1, IndyCar and NASCAR. Considering this list includes drivers like Andretti, Foyt, Gurney and Montoya, he’d be in good company.

Born into a family that has a colorful history in auto racing, young Pietro Fittipaldi is doing his part to keep it going.

Pietro, the 25-year-old grandson of Emerson Fittipaldi, has nine career IndyCar starts dating back to 2018 with a best finish of ninth that year at Portland International Raceway. This year, he has driven the No. 51 Coyne/Ware-owned machine on three of the oval races, scoring a best finish of 15th at Texas Motor Speedway.

If he wants to add NASCAR racing to his resume, he already has his cousin Christian Fittipaldi to lean on for advice. From 2001-03, Christian had 16 Cup starts, three Xfinity starts and two ARCA Menards Series starts under his belt. And, like Grosjean above, Pietro could have quick access to a Cup or Xfinity car thanks to Ware. Perhaps soon, the Fittipaldi name will be back on the NASCAR grid.

Pippa Mann may only appear in the IndyCar Series once in a blue moon, but this fair lady from the United Kingdom has the willingness to compete and excel every time she gets in the car.

Mann, whose 38th birthday comes on Wednesday, has 17 career IndyCar starts on her resume, with seven of them coming in the Indy 500. Before she jumped up to IndyCar, she ran the full 2009 and 2010 seasons in Indy Lights, scoring three poles and nabbing one win. That came at Kentucky Speedway in 2010.

Mann was a close friend of the late Bryan Clauson, and her 16th-place Indy 500 effort in 2019 came with Clauson’s No. 39 on her car. She is also quite active with charity work, having been sponsored by organizations such as Donate Life and the Susan G. Komen Foundation for select IndyCar starts.

Even though Mann has no planned IndyCar races on the table, NASCAR could be a good option for her. Her fellow countrywoman in Katherine Legge made the same move in 2018, making four Xfinity starts for JD Motorsports.

With her strong connection to the Clauson family, that link might be the starting point of getting a NASCAR team to someday notice her and give her a race or two. For the few times that Mann gets to competitively race these days, it could truly be a valuable experience.

I would rather see American short track drivers get a chance.

It’s interesting that no NASCAR driver has moved UP to Indy cars on a regular basis. Driving one-off on the oval at Indy is one thing, but apparently no one in NASCAR has had the skill and temperament to make a career-changing move. Sure, money is an issue, but we also don’t see NASCAR drivers move to F1 where the money matches the skill level, both of which exceed what stock car drivers have.

“Moved UP” to Indy Car or F1?? Having money doesn’t make the man or driver. Just like winning “Miss Universe” which is actually the winner amongst rich girls. The most talented Drivers like the most beautiful girls is not only limited to the uppity class.

Love the open wheel trolls out looking for a fight… always entertaining.

I’d like to see Baby Busch run the Indy 500. It should get him to stop hitting the wall to make his car handle better.

Why hate on talent?