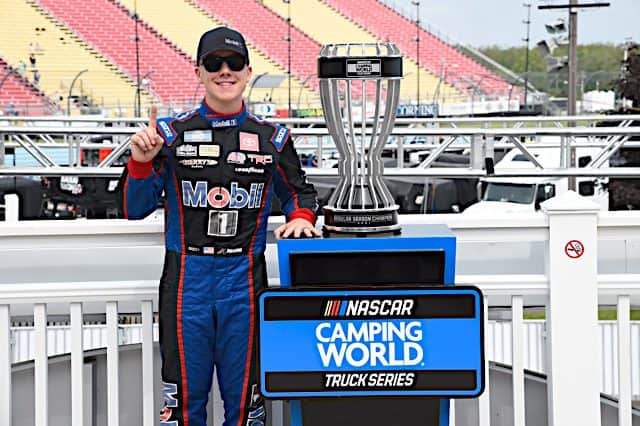 Author’s Note: This is the first of two parts looking at the 10 drivers who have qualified for the 2021 Camping World Truck Series playoffs. Part two will run next week ahead of the opening playoff race at World Wide Technology Raceway at Gateway.

After a year in the Cup Series running midpack but still outperforming his equipment, John Hunter Nemechek dropped back to the Truck Series to race for wins, and that’s exactly what he’s done this season. The 24-year-old has five wins and nine stage victories to go along with the regular season championship, giving him a whopping 49 playoff points to start the postseason. With just one finish outside the top 12, it will take a collapse of epic proportions to take the No. 4 team out of the championship battle.

Fresh off of a win at Watkins Glen International, Austin Hill scored Hattori Racing Enterprises’ first road course win in team history and his own first win from the pole. Additionally, it’s the first time the driver of the No. 16 Toyota has back-to-back wins in his Truck Series career, claiming the victory at Knoxville Raceway in July before the series’ hiatus. It’s the kind of momentum any team would love to have heading into the playoffs.

Hill has been the story of consistency throughout the season with just two finishes outside the top 15 in the first two races of the year. But more importantly, he now has seven straight top 10s, and that includes four top fives over that same span. Hill is peaking at the right time to carry that momentum straight through to the Championship 4.

After posting back-to-back wins at Daytona International Speedway and the track’s road course to open the 2021 season, Ben Rhodes has two runner-up finishes and only managed to lead double-digit laps in a single race at Darlington Raceway. But the momentum with the No. 99 team is swinging in the wrong direction this late in the season.

A 15th-place finish at Watkins Glen marked his third finished outside the top 10 in the last five races compared to just one in the first 10 races. He was locked into the playoffs very early in the season, so the downturn could be as simple as the team experimenting with setups in preparation for the championship battle, but if this performance keeps up over the next couple of races, Rhodes’ title hopes will come to an end earlier than he would like.

Now in his second season racing for Front Row Motorsports, you can see the change in Todd Gilliland‘s attitude along with the uptick in his performance. This season, he’s won a race (Circuit of the Americas), made the playoffs and already surpassed his top-five and top-10 count over last year. Additionally, as the latter half of the regular season went by, Gilliland has shown the rest of the field he’s there. He’s led laps in seven of the last eight races and has just one finish outside the top 10 in that same stretch (15th at Darlington).

It’s unlikely the No. 38 team can best a frontrunner like Nemechek down the stretch, however three top fives in the last four races suggest they’ve found setups that work well for the third-year driver, which can easily translate into playoff longevity.

If you compare this season to 2020, it’s easy to look at Sheldon Creed as a disappointment. After all, by the time the playoffs started last year, he already had three of his five wins and led the field when the points were reset for the Round of 10. This year, though, the driver of the No. 2 Chevrolet has the lone win at Darlington to go along with what has been a rollercoaster of a season.

Three DNFs in the last six races sit alongside a 14th and a pair of third-place runs, but on the flip side of that, six of his seven top 10s were also top-five results. It’s not the kind of performance that bodes well statistically for a championship run, however, Creed’s ability to win when it matters most for him puts him in a position to show off throughout the playoffs.

Simply put, the 2020 champion doesn’t want to race in the Truck Series next year, and a strong performance throughout the playoffs could be the difference maker in signing the sponsorship needed to make the move to the Xfinity Series for 2022.