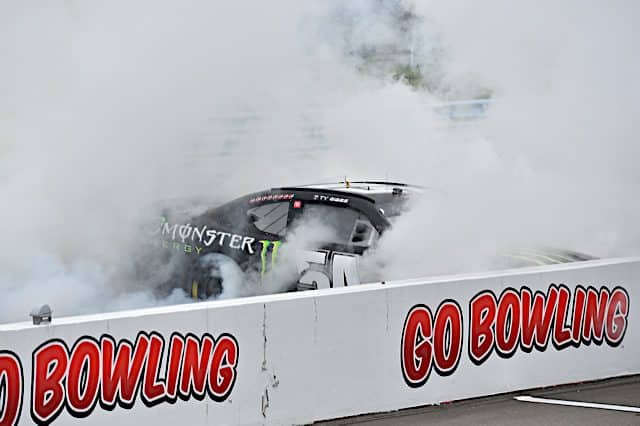 When the 2021 NASCAR Xfinity season meets its conclusion at Phoenix Raceway, there will be no shortage of pomp and circumstance with the crowning of a new series champion.

Regardless if it’s a repeat title by Austin Cindric or someone else hoisting the championship trophy, this much is true: This year’s champion won’t be the biggest story of the season in the NASCAR Xfinity Series. That would be Ty Gibbs.

It’s one thing to come into a new racing series and win right away. Doing so time and again? That’s much harder to do.

Gibbs’ schedule has been limited in terms of races this year, but to say that the most has been made of this foray into the series is an understatement. Not only has Gibbs ripped off three wins in 10 races, but two have been on road courses and one on an intermediate track, Charlotte Motor Speedway. As notable as that is, there’s also this: Other than a transmission issue at Road America, Gibbs worst finish in his past seven races has been fifth. That’s right, the number after four and before six.

If you need proof that Gibbs is beyond his years as a driver, just take in what AJ Allmendinger had to say after being outdueled by Gibbs on Saturday at Watkins Glen.

“Ty did a great job, he was clean, made a great move on me and I couldn’t really do anything to defend it,” Allmendinger said, noting that although he initially took the lead on the race’s final restart with four laps remaining, he knew he would have to deal with Gibbs for the win.

“I knew how good he was, especially in the carousel and going through the last couple corners,” Allmendinger said. “That car had a lot of rear grip and he used it.”

There’s no denying this fact. Of all drivers to have wheeled a car in the NASCAR Xfinity Series this year, nobody has been as impressive as Gibbs.

Yes, even more so than Kyle Busch. Busch is expected to win when he’s in a Truck or Xfinity Series event. If he does not win, it’s a huge story, which is why if you’re a Kyle Busch fan within driving distance of a race that he enters, you’re pretty motivated to make your way there. It’s not too different than the early 2000s when Daytona International Speedway and Talladega Superspeedway got a very healthy ticket-buying bump when Dale Earnhardt Jr. entered the race in what was then called the NASCAR Busch Series.

Even Busch, during his memorable (or painful if you’re tasked with repaving Atlanta Motor Speedway post-race) rant last month in Atlanta, couldn’t help but find a way to back-handedly imply that there’s a tie-in between empty seats at companion events and a lack of NASCAR Cup Series drivers.

Some detractors, of course, will point out that not much talent is needed to win in a JGR Xfinity car. That’s as absurd as the same envious argument that was made about Austin Dillon and Ty Dillon at Richard Childress Racing. Multiple drivers have driven for JGR in the Xfinity Series, including Ty Dillon. This year alone, Daniel Hemric and Harrison Burton have combined to win absolutely zero times in the Xfinity Series.

Being in great equipment and having a great opportunity does not automatically add up to winning races. You still have to go out and take advantage of those chances, and few people have done that better than Gibbs this year.

Busch may not currently have any known plans to run Xfinity races next year, but if you’re weary of a Joe Gibbs Racing driver winning a lot in the NASCAR Xfinity Series, pull up a chair, fix a cold drink and get ready for a strong dose of Ty Gibbs in the future.

What to watch for this weekend

Who’s hungrier than Cindric? You’d be hard-pressed to find anyone that wants to win this weekend more than Cindric. Who can blame him? When your dad is at the helm of calling the shots racing-wise at Team Penske, when you have a strong handle of what winning at Indy means … oh, and the fact that Roger Penske owns the place? It’s like being the host country of the Olympics. Everyone expects you to win. No pressure, right?

Ringing In, Again. Few remaining road courses mean that the chance to see a road course ringer upset the apple cart this year won’t present itself much more. While we’ll see a return at Indy for both Spencer Pumpelly and Ryan Eversley, the most intriguing name in this group is Sage Karam as the Jordan Anderson Racing rotating driver lineup gives him a shot this weekend.

It’s too bad Mark Donohue didn’t have a more reliable car. He could have won more.

Huge Mark Donahue fan but I’d still give Gurney the nod by a bit.