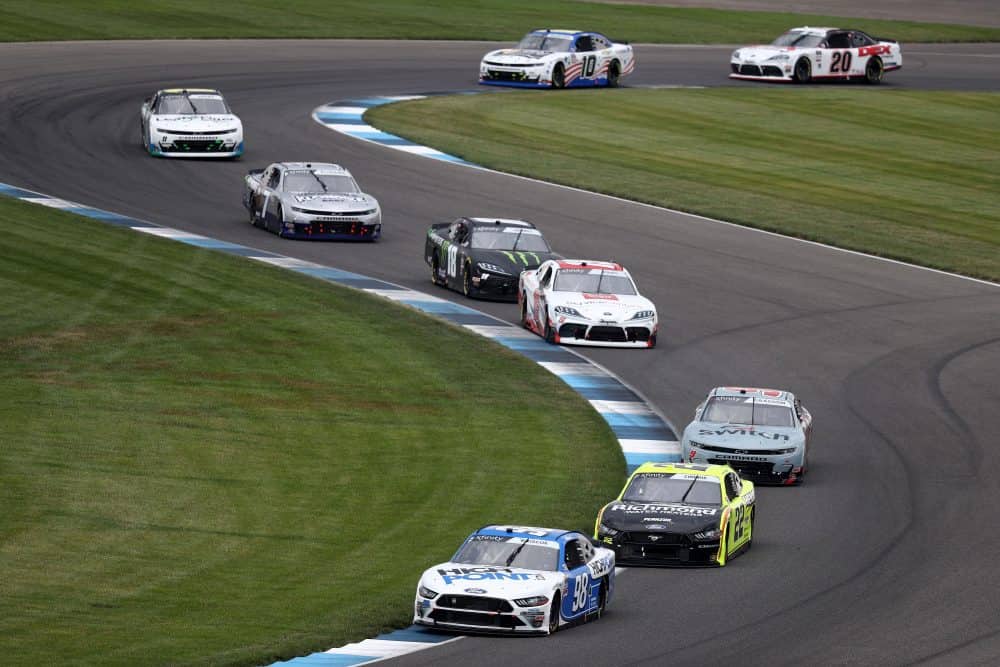 The Watkins Glen International NASCAR Cup Series event was run in just under two hours and 11 minutes, to the delight of some who say races are too long. What’s the shortest (or longest) you think a Cup race should run? Should a time limit be considered?

Luken Glover: It really varies on how long and short races should be. Races at tracks like Dover International Speedway, Circuit of the Americas and Atlanta Motor Speedway are too long. There aren’t any races right now that are too short. For intermediates, 250 to 300 laps max is fine with me, though the Coca-Cola 600 should not be changed. The short tracks and a couple of road course races could be shortened a little bit, and the superspeedways don’t present a problem. It depends on how many cautions a race sees as well.

Josh Roller: First off, a time limit should NEVER be considered. Formula 1 and sports car racing can keep that to themselves. A Cup race should aim to be completed between two hours and 45 minutes and three hours and 15 minutes. That’s roughly the average length of an NFL game. If NASCAR implements a 400-mile/500-kilometer limit for ovals, excluding the Daytona 500, Southern 500 and Coca-Cola 600, it shouldn’t have an issue keeping to around three hours, barring any significant weather or incident delays.

Joy Tomlinson: It depends on the racetrack, but the shortest Cup race should be around three hours, except for road courses. Watkins Glen was run the amount of laps it had been before; the difference was the caution period between stages were shorter and there were no major wrecks that required extensive cleanup. There was also an NTT IndyCar Series race on NBC Sports Network right after the Cup event, so it could have been rushed for that. Road courses should be this length or a bit longer, but other races like the Coca-Cola 600 or Daytona 500 should be kept at their respective lengths.

See also
5 Points to Ponder: When Chase (Elliott) Does the Chasing

Denny Hamlin could mathematically still miss the Cup playoffs despite being one of the most consistent drivers this season. Would this warrant a change in the eligibility requirements?

Tomlinson: It should, but it probably won’t change anything. Besides, NASCAR wants to reward drivers who win in the regular season (as it should). Last year Kevin Harvick didn’t make the Championship 4 despite winning the regular season and nothing was changed to allow something like that to happen again. While consistency is good to have, it unfortunately isn’t the best thing to ensure a driver’s spot in the playoffs. On the other hand, if 17 drivers won in the regular season, one winner would be knocked out before the playoffs. NASCAR has promoted win-and-you’re-in for a while, and I would be surprised if that changes anytime soon.

Roller: I don’t want to see any changes to the playoff eligibility because after a decade of consistent change (2004-13), it’s been nice to only have one major change since 2014. With that said, if you are outright in the top five in points at the end of the regular season, you should be guaranteed to make the playoffs — win or no win.

Glover: Ultimately, it would have to. Eligibility requirements have been overdue. First off, the eligibility from points should at least be shifted from finishing inside the top 30 in points to the top 25, and that still feels like a stretch. If a driver finishes in the top three or five in points, there is no reason for them to not make the playoffs. Wins are the markers for teams, but winning isn’t everything to have a title shot; just ask Matt Kenseth from 2003. I do enjoy the drama and uncertainty these playoffs feed but there also has to be limitations on parity and rewarding consistent drivers. I would like to see NASCAR return to the 10-driver Chase system. It gives fans who want a season-long points battle some of what they want and provides the playoff advocates with the drama of a postseason. It makes each week worth fighting for points and earning as much as teams can.

Does the Indianapolis Motor Speedway road course have the same level of prestige for fans and drivers as the oval?

Glover: Strong no. Denny Hamlin and Ryan Newman have both voiced their disagreement with the move in both outright and subtle ways, and I wouldn’t be surprised if a lot of drivers feel the same way. Two things hurt the oval: the 2008 Goodyear debacle and the current aero package. Both can easily be made up for if NASCAR puts more effort into it. Just think of the iconic moments this track gave us. Jeff Gordon and Dale Earnhardt continued their movements in the fan base by winning in 1994 and 1995. Dale Jarrett started the illustrious tradition of kissing the bricks. Indiana natives Tony Stewart and Newman earned special wins at their home track. Paul Menard scored his only Cup victory in 2011. Gordon earned his fifth Brickyard win in an outstanding way in 2014. Kasey Kahne  gave all he had to snap a drought and finally win at Indianapolis. The list goes on and on. I’m not a big fan of all the road courses on the schedule, and this one leaves a bitter taste. A crown jewel race should never have been touched.

Tomlinson: Definitely not. The oval is a crown-jewel track, especially for drivers, and should have been kept on the schedule. I’m sure most drivers dream of winning at Indy, and while the road course is a great addition, it isn’t the same as running the same track as the Indianapolis 500. The road course will have its own significance, especially for the first Cup event there. Maybe next year NASCAR can have both an oval and a road course event similar to what was done at Charlotte Motor Speedway.

See also
2-Headed Monster: Did NASCAR Make the Right Call to Move Away From the Indianapolis Oval?

The Xfinity Series has a significant number of road-course ringers attempting to qualify for Indy. Which one has the best shot at winning?

Roller: This driver isn’t in as good of equipment as he has been recently, but I’m picking Andy Lally. He will need some luck and misfortune for some of the series regulars who are top contenders on road courses, but Lally will be in the top 10 ready to strike if the time arrives.

Glover: I’m keeping my eye on Sage Karam for Jordan Anderson Racing. Sure, he has never been in an Xfinity car and I don’t expect him to win. But JAR has surprised in more ways than one already, and Karam has the background to quickly figure out the track.

Tomlinson: May I say none? No? Well, if I have to choose, I’ll go with Lally. He’s had a couple of top fives at Mid-Ohio Sports Car Course in Xfinity and he has a lot of experience compared to the other ringers. Of course, he’ll need a good pit stop strategy and others to have mistakes in order to be in contention, as BJ Mcleod Motorsports doesn’t have as good equipment as Austin Cindric, Justin Haley or AJ Allmendinger.