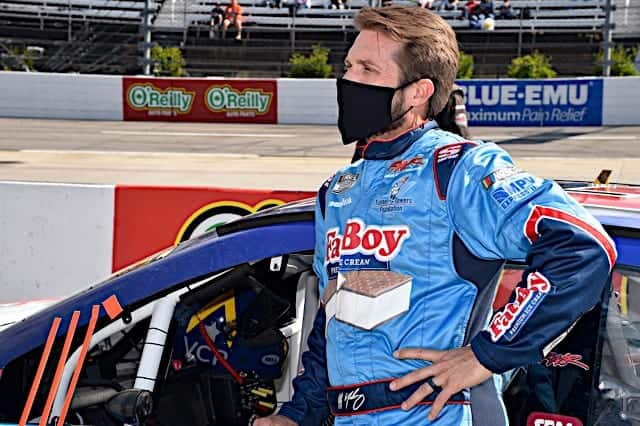 Max Papis has tested positive for COVID-19 and will be unable to compete in the upcoming NASCAR Xfinity Series race at the Indianapolis Motor Speedway road course, Rick Ware Racing announced Aug. 12.

JJ Yeley will serve as the replacement driver of the No. 17 Chevrolet. He was initially entered in the car earlier this week before Papis was announced for the ride.

Papis was slated to make his first NASCAR attempt since 2013.

“It’s always an unfortunate event when another driver has to be taken out of the car,” Yeley said in a team release. “I have a great respect for Max and all that he has done for the motorsports world. I will try my best to get the Nurtec ODT (Rimegepant) car in the show and compete on Saturday.”

Yeley will attempt to make his eighth start of this season. He is currently 32nd in the driver standings, with a best finish of 12th at Homestead-Miami Speedway.

The Pennzoil 150 will take place this Saturday, Aug. 14, at 4 p.m. ET with TV coverage provided by NBC Sports Network.

Thankfully for Max the false positive rate of the PCR test is ridiculously high. It’s inventor said as much. As did the inventor of the ‘vaccine’ give warning, both were silenced by the tech oligarchs (and FS moderators, probably) and the government.

And the death toll, which thankfully been declining, is what now? Over 600k I believe.

No he didn’t. Since your the expert here, name the inventor of the vaccine please. I’ll wait.

Exactly right. If I ready it correctly Texas is absolutely against mask mandates but wants assistance from others in helping their deal with this heir self inflicted problems.