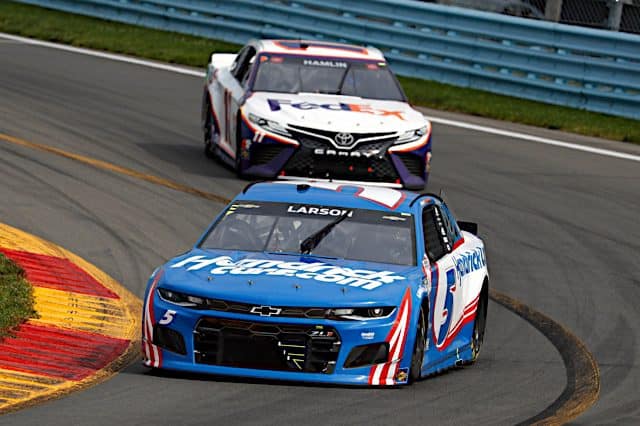 NASCAR Cup Series drivers hope to kiss the bricks this weekend but this time at the Indianapolis Motor Speedway road course. Let’s get your daily fantasy NASCAR DraftKings rosters ready for Sunday’s (Aug. 14) Verizon 200 at the Brickyard!

It’s the Cup Series’ second consecutive road course event after Kyle Larson earned his fifth win of the season at Watkins Glen International last week. It’s also the third new road course of the year for most drivers in the Cup field, with Road America and Circuit of the Americas were the other two. Competitors previously drove counter-clockwise on the Indy oval, now drivers will go the opposite direction and make right and left-hand turns in the infield.

The 2.439-mile course has 14 turns and is run clockwise, unlike the ROVALs at Daytona International Speedway and Charlotte Motor Speedway. Additionally, the oval portion of the Indy road course is much flatter than Daytona and Charlotte. Still, drivers who ran well there should find comfort at Indy.

Another note about this racetrack: AJ Allmendinger, who ran the Indy Xfinity Series race last year, compared this course to Road America due to long straightaways. Of course, those drivers who are generally good on this track type usually adjust more quickly to new environments.

Like last week (and on most road courses), there’s not many laps in this race, so you’ll definitely want to look for drivers who could gain the most positions. Such was the case at Road America where some good drivers didn’t go on track during qualifying right away, and when the red flag came out due to stopped cars, their laps didn’t count and they started at the rear.

Oh, did I mention practice and qualifying is back this weekend? Cup teams will practice Saturday at 11:05 a.m. ET with qualifying at 9 a.m. Sunday before the race. Be sure to check the results of these sessions and leave yourself enough time to form a lineup after qualifying is done.

Before I share who I’m considering, here’s what happened last week at Watkins Glen:

The key last week was choosing the right value plays, which I did not. Chase Elliott, Martin Truex Jr. and Chase Briscoe all scored well, but Erik Jones‘ and Ryan Preece’s lower scores set this lineup back a bit.

Note: the following drivers are in my DraftKings player pool; you can use the information to create your own lineup.

I think by this point it’s obvious that Chase Elliott is a contender on road courses, so this time I chose Larson, his Hendrick Motorsports teammate. The No. 5 driver just conquered Watkins Glen last week after leading 27 laps and recording 19 fastest laps. He had the best green flag speed and the second-best average running position.

In fact, Larson’s average running position has been stellar this season on road courses, as he’s had one of the three highest averages at Road America, Sonoma Raceway and COTA. He took the victory at Sonoma as well as three oval courses and is tied atop the point standings with Denny Hamlin.

At new track layouts, Larson has been alright; he was second at COTA but struggled at Road America and ended up 16th. In 2018 at the Charlotte ROVAL he led 47 laps but encountered trouble and finished outside the top 20. Still, his speed on road courses (and other tracks) this year has been nearly unmatched, and he should have no trouble working his way to the front at Indy.

Hamlin is still looking for his first win of the season, and while it seems unlikely that it will come this weekend, the Joe Gibbs Racing cars are always fast at this track type. In fact, last week at Watkins Glen Hamlin notched 14 fast laps before coming home fifth. He matched that result three races prior at Road America, and at Sonoma he was eighth.

The No. 11 Toyota pilot had the third-best average run position at both Road America and Watkins Glen. Hamlin also had the fourth-quickest green flag speed, going 118.213 mph. He also brought home a podium at the Daytona road course in February. Although his lone road course win was at WGI in 2016, he still has performed well at most of the road course events. Hamlin’s one trouble spot seems to be the Charlotte ROVAL as he has no top 10s there yet.

If he is able to keep up the strong runs like in the last two road course races, he should score well on DraftKings. His cohort Kyle Busch has also shown speed lately, but he hasn’t finished well on the ROVAL type tracks. Remember to check practice and qualifying to see how these drivers do.

Kurt Busch’s average running position at road courses this season is between nine and 15. He took home a 13th at Watkins Glen last Sunday and was fourth at Road America after starting 16th. He was also sixth at Sonoma, 24 positions further from where he began.

Though the rain left him gliding into the gravel at COTA, he was running around 12th on average before that setback. Lastly, on the Daytona road course, he finished fourth after starting 17th.

The No. 1 Chip Ganassi Racing driver has started putting together really strong finishes lately, including a victory at Atlanta Motor Speedway in July. But both Ganassi cars have run well at road courses, as Ross Chastain has earned one top-five and three top 10s on them this year. Either one could be a viable piece to your DraftKings roster.

Briscoe is one of the few drivers in the Cup field this year who has experience on the Indy road course, having won the inaugural Xfinity event last season after leading 30 circuits. He’s likely to be popular on DraftKings, but if he starts in the 20s or 30s I don’t see how you wouldn’t play him.

All of his top 10s this year have come on the road courses; at WGI he was ninth, 18 spots further from where he started. The No. 14 Stewart-Haas Racing wheelman finished sixth at Road America and at Circuit of the Americas. These strong finishes helped Briscoe get a high score on DraftKings, placing him in the perfect lineup three times (according to LineStar). He should definitely be in your player pool.

Dillon is battling with his Richard Childress Racing teammate Tyler Reddick for the final spot in the playoffs, depending on who wins these next few races. If Dillon can keep performing like he’s been doing, he might just make it. However, for DraftKings purposes, Dillon is a valuable piece to your roster.

The No. 3 driver has just one result outside the teens since Martinsville Speedway. That’s 15 races of 17th or further, which is very consistent. His 11th and 15th place finishes at Road America and Watkins Glen, respectively, helped to place him in the DraftKings perfect lineup. Both RCR drivers should be considered, though Reddick is riskier since he often qualifies really well.

I know what you may be thinking. “Corey LaJoie?” Yup. He has some pretty good results at road courses for his Spire Motorsports equipment. LaJoie was 24th at Watkins Glen — five positions further from where he started — and was 21st at Road America. Additionally, he was 18th at Sonoma and 20th at COTA. These results kept his scores in the 20s, which is sometimes just what you need to be in the green. Keep an eye on where he starts Sunday and whether he needs a backup car, as this could take him off of my prospects.