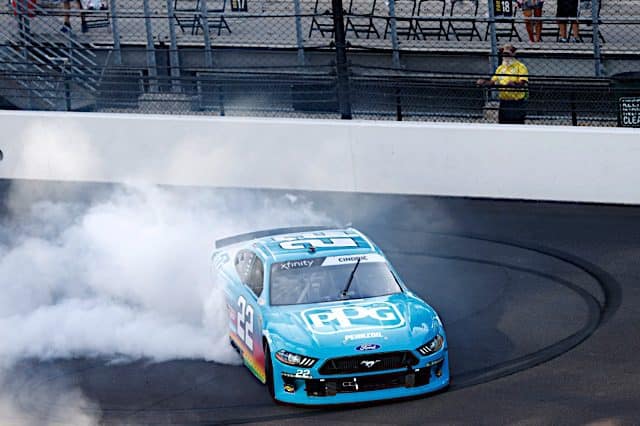 The NASCAR Xfinity Series took to the Indianapolis Motor Speedway road course for the Pennzoil 150 at the Brickyard and Austin Cindric drove away from the field to get the win Saturday (Aug. 14).

This is the second of three major American motorsports events this weekend with the NTT IndyCar Series taking to the track first. Team Penske won that race as well when Will Power earned his first victory of the season. This is also the first time the IndyCar, Xfinity and Cup series raced the same track on the same weekend.

It’s Cindric’s first road course victory of 2021 and fifth overall this season. The win extended his points lead over AJ Allmendinger, who finished second behind the No. 22. Justin Haley was third.

Chase Elliott, who filled in for Michael Annett in the No. 1 JR Motorsports Chevrolet, was fourth. Annett is still recovering from surgery on his leg last month. Teammate Noah Gragson rounded out the top five.

Austin Dillon, who has yet to place a top-10 road course finish in his Cup career, was sixth in the Xfinity race. Myatt Snider was seventh and Riley Herbst crossed the line in eighth place. Harrison Burton, who was involved in the lap 1 turtle jump, brought home ninth and Andy Lally completed the top 10.

The Xfinity race was wild from the get go. Allmendinger, who started on the pole, went off the course twice in the first lap, losing multiple positions. The turtles, six-inch-high steel rumble strips that serve as speed bumps, were added so cars wouldn’t go on the grass. However, these bumps wreaked havoc on the first lap. Cup veteran Kevin Harvick, Harrison Burton, Brandon Jones, Brandon Brown, and Preston Pardus all hit these bumps, with Pardus bringing out the first caution.

"They're all jumping that curb. Goodness gracious!"

The @NASCAR_Xfinity Series race at @IMS is underway on NBCSN.

The second caution came out for debris from Ryan Sieg after Cindric took the lead from Justin Haley with five laps to go in the first stage. After the pit stops and the restart, Haley reclaimed the lead and won stage one. Stage two was fairly calm until two to go, as Will Rodgers exited his pit box with his right front tires on fire, mixing up the field with those who did pit and those who didn’t. Allmendinger ended up winning stage two.

Ultimately, it was Cindric who took the win for the fifth time this season and also surpassed Marcus Ambrose for most laps led in Xfinity road courses.

Retweet to congratulate @AustinCindric on his NASCAR Xfinity WIN at @IMS! pic.twitter.com/bzaaKI6u4W

The Xfinity Series takes on Michigan International Speedway on Aug. 21 at 3:30 p.m. ET and will air on NBC Sports Network.