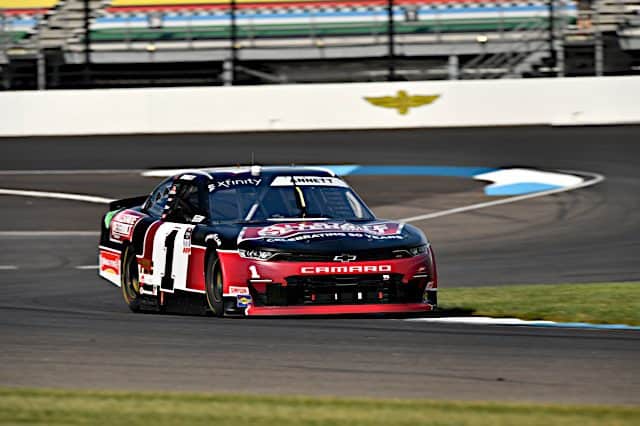 The defending NASCAR Cup Series champion awoke in Indianapolis to 10 missed phone calls. The last one was from Chad Knaus, Hendrick Motorsports’ vice president of competition.

“I’ve done it,” Elliott thought. “I slept through practice and I’m getting fired. It happened today.”

Fortunately for him, “that was not the case,” Elliott told NBCSN.

Instead, he was called in to substitute for JR Motorsports’ Michael Annett in the Xfinity Series race on the Indianapolis Motor Speedway road course. Annett is still recovering from surgery to address a stress fracture in his leg.

“It was an opportunity to get laps that I couldn’t turn down,” Elliott, who wound up making his first Xfinity Series start since the 2019 opener at Daytona International Speedway, said.

"I've slept through practice and I'm getting fired."@ChaseElliott had a nightmare seeing all of his missed calls this morning. He filled in for Michael Annett today at @JRMotorsports, finishing fourth at @IMS. pic.twitter.com/vpUVbu2rGY

At the end of an eventful 62-lap race for the Cup champion — which included two incidents with teammate Sam Mayer, the first which saw Elliott spin and the second that ended with Mayer hitting a tire barrier — Elliott had snagged a fourth-place finish. It’s only the second top five the No. 1 team has earned this season, following Annett’s third-place run at Road America.

More importantly for Elliott, he got more experience on a track that had frustrated him in his lone Cup practice session Saturday. Elliott was 23rd on the speed chart after 20 laps around the course.

“A lot better I think from where I was this morning,” Elliott told media on pit road. “So I’m happy about that, not quite exactly where I want to be but better for sure. … I haven’t been super impressed with myself today. I don’t feel like I’ve done a great job here in adapting to this track and getting up to speed, executing and doing all the right things.”

That’s not the level of confidence one would expect from a driver whose won twice on road courses this season, at Circuit of the Americas and Road America.

“I don’t feel like our car is all that bad,” Elliott said after practice. “When I have a good lap or hit a good corner, I feel like I get rewarded for it, which is good. But I just have not put together a solid lap, and certainly not two or three in a row.”