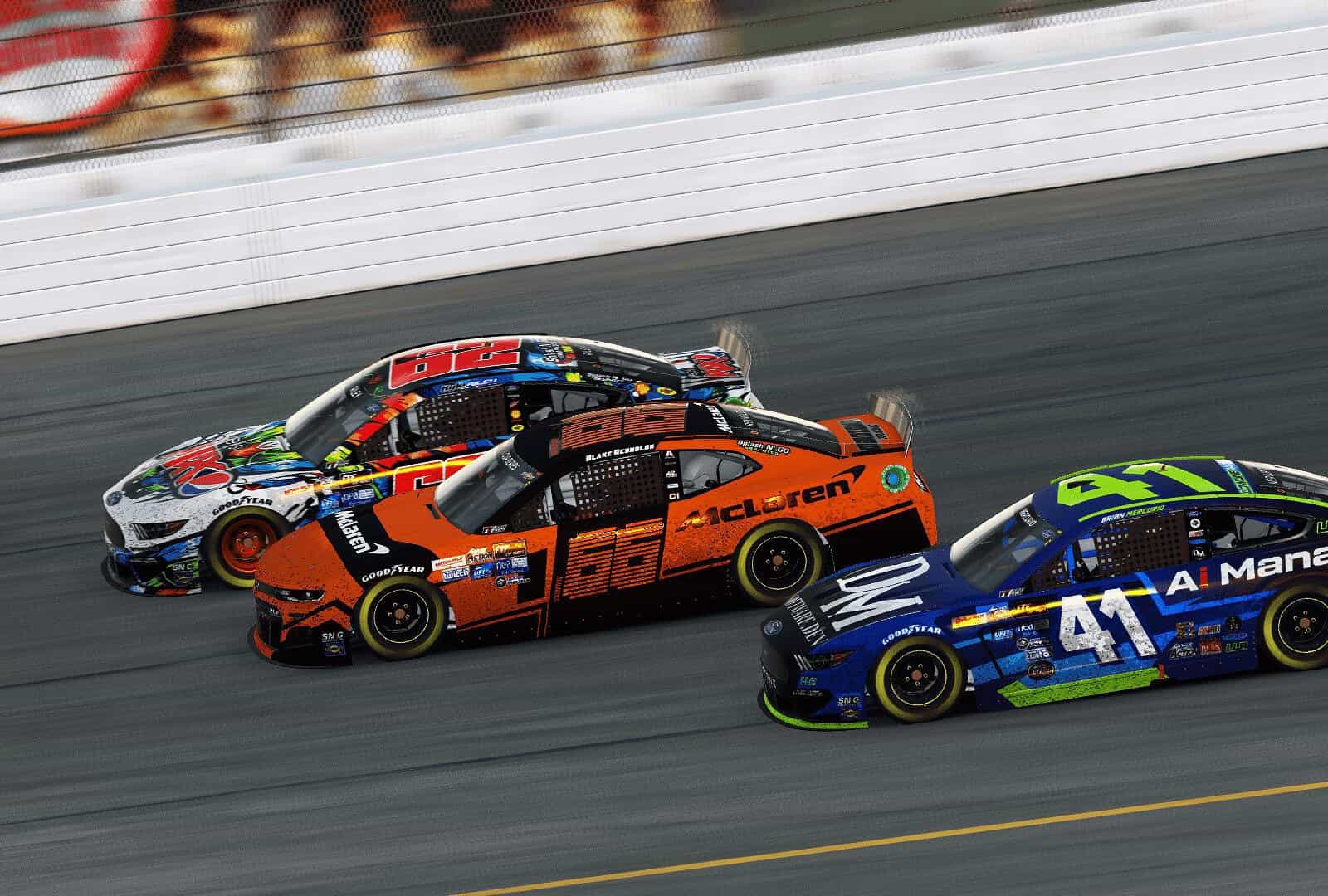 In the last two weeks, every single one of the communities we cover here raced at least once at a road course. Of course the eRacr.gg Roval Racing Series did, but so did 100% Cup at Watkins Glen, FTF at Indy Road, Monday Night Racing at Homestead-Miami’s Roval and Road To Pro also went over to Watkins Glen.

Check out the latest results in this week’s edition of the roundup.

The Indianapolis road course isn’t the current version of the track. It’s coming at some point, seeing as iRacing’s scan van was recently at IMS, but for now, there are a few extra turns in the infield and one less chicane on the outer oval.

In the third week of the eRacr.gg Roval Racing Series, a pair of eNASCAR Coca-Cola iRacing Series drivers in Vicente Salas and Casey Kirwan joined in on the fun for the first time this season. The two duked it out throughout the first stint, working their way around lapped traffic and each other. Salas would win out and took his first win of the season in Class A.

Class B was won by Matt Taylor, his second win of the season, while Hunter Reeve took his first victory in the Ballistipax Trucks Class C.

That is a wrap in Indy!@vicente_salas14 wins in his #eRRRS debut!@LH_MTaylor captures another win in B Class, extending his points lead!@Hunter_K_R captures a win in the @ballistipaxllc C Class helping him close in on the C Class points leaders! pic.twitter.com/whqJskw2an

Halfway through the inaugural season, the fourth event of six would bring the eRacr.gg ROVAL racers up north for some New England road racing. The New Hampshire Motor Speedway road course uses the majority of the oval but takes a detour in the first turn towards the infield before going back out to the oval.

The fun part of this ROVAL is that the track goes outside instead of inside, and races a few corners on the backstretch before reentering the track to take turns 3 and 4 as normal.

Vicente Salas returned for his second race of the season and dominated the Class A race. Matt Taylor took another one, his third of the season. In the Ballistipax Class C, Brandon Paunetto won a very emotional victory, his first of the season.

What a race in New Hampshire today for Round 4 of the eRacr Roval Racing Series!

Congrats to your winners:@vicente_salas14 goes two in a row!@LH_MTaylor wins ANOTHER B Class race extending his points lead!@ballistipaxllc C Class winner is a very stoked Brandon Paunetto! pic.twitter.com/OtYg0cGZnU

Through four races and with the drop week finally included, each class’s points are becoming clear entering the final stretch. Matt Danson won the first two races of the season, but after a bit of a fall-off in the last two weeks, he only leads by 15 points over Vicente Salas, who only has two starts.

Class B is Matt Taylor’s points battle to lose, while the Ballistipax Class C is the closest battle. David Grantham leads Brandon Paunetto by two points and Jeremy Breault by six. Paunetto won’t be able to make the finale, so he’ll have to rely on his dropped race and Auto Club finish to carry him to a possible title.

Points for the eRacr Roval Racing Series after ROUND 4!

If you noticed a large shake up in points, that is because each driver's one "drop week" has been applied, and will so for the next two rounds!

↪️Catch Round 5, at Auto Club, Saturday at 7pm ET

Check out the action over at eRacr.gg.

Jon Dulaney earned max points in the series’ return to action at Watkins Glen last week. Dulaney started on the pole position, won both stages, and led all but seven laps en route to his sixth win of the season.

Thomas Miller, who finished second, was the only other driver to lead.

Root and Baker got fender to fender for the 3rd place at @WGI!!! This what we call racing!!! #iracing #racing #simracing #leagueracing #enascar pic.twitter.com/wOD9rFIKPB

With now three races until the playoffs begin, seven drivers have a victory and are a lock for the title hunt. Will anyone else be able to steal a win from the trio of Dulaney, Bryson Hixenbaugh or Adam Benefiel?

Indianapolis turned into another Hawkin versus Reynolds battle. Blake Reynolds, still searching for his first career FTF Cup Series victory, seemed to have the advantage early on, but in the later stages, Brandon Hawkin took control. Fuel mileage was in play, and Reynolds didn’t believe Hawkin had enough.

Hawkin did have enough, and he held on for his second win of the season, keeping Reynolds at bay once again.

It was a Brandon Hawkin special on Sunday night. No tires were kicked or harmed in the Kickin' The Tires 250k but fuel tanks were definitely stretched thin. Hawkin holds off Blake Reynolds for the dub. pic.twitter.com/zKeog05Ff3

The way things were set up by the league, Michigan was essentially a superspeedway race for the majority of the time. There was aero push and tire wear to deal with, but for the most part, drivers were packed up and driving flat out.

The big surprise of the night came from Kyle Riley, who was able to work his way to the front with his teammate Justin Melillo early on. Riley proved to be a contender all night, but Blake Reynolds was still extremely hungry for his first win. The two came off the final corner side-by-side. They made contact but held it straight, and Reynolds was able to take his first career Cup victory.

The final race to set the playoffs takes place this weekend at the Daytona International Speedway, but the older version. The field is basically set for the playoffs, but drivers like Jack Paynter, Ryan Pandiscio or Andy Margo could shake it up and make the playoffs with a win on Sunday night.

With Adam Alexander and Dave Moody on the call, the opening race of the Round of 10 proved to be a chaotic one by the end. The 36 drivers all played chess to get themselves in position at the end, but Steven Ellis flipped the table over, surviving the last lap mayhem which involved every single driver in the lead pack.

Ellis had to send Brad Perez to the moon in order to make it through, but the sim racing gods were on his side as the contact barely slowed him down, if at all.

FINAL LAPS: @StevenEllisTHN comes from NO WHERE from 29th to 1st dodging the “Big One” to win his first career MNR victory at @TALLADEGA@iRacing | @SimSeats pic.twitter.com/wSr5sThyDK

The finale to the Round of 10, three more drivers would face elimination after 75 minutes of racing around the Homestead-Miami Speedway ROVAL. Gabe Wood wasn’t the fastest driver on the night, but he kept things fairly consistent towards the final stages of the race.

After Nick Sanchez wiped out a bunch of the leaders and was disqualified, Wood took over and held off a late charge from David Schildhouse for his first career victory.

Moving on to the Round of 7, the following drivers still have a chance to win the title:

The first split was a Brian Lockwood road racing showcase on August 5th. Lockwood, who was towards the bottom half of the standings after Knoxville and Homestead-Miami, moved himself up to 31st overall after his dominating performance.

Series points leader Donovan Strauss managed a fourth place finish, maintaining his lead, while Cody Byus moves up to third overall in the standings after a P2 run.

The second split was a little more interesting for the battle for the win. Kyle Peddle took the pole position and led 13 laps, but through pits and other on-track action, Dylan Ault managed to take the lead. Ault held on for the win after starting second and leading 19 laps. Ault moves into the Top 20, now 16th after the event.

Briar LaPradd maintains his second-place standing overall with a fourth-place finish. Peddle falls to fourth in the standings, while Jordy Lopez Jr. moves up to fifth with a runner-up finish.

eRacr.gg’s Roval Racing Series will run the Auto Club Speedway ROVAL on Saturday night, completed before this roundup posts. Like the 100% Cup Series, the recaps will be posted next week. Check out the action on Saturday nights at 7:00 p.m. ET on eRacr.gg.

100% Cup Series will head to the Indianapolis road course on Saturday night at 8:30 p.m. ET. The replay will be available on 3 Wide TV.

FTF Racing will wrap up their regular season at legacy Daytona on Sunday, live at 8:00 p.m. ET on BottomSplit.

Monday Night Racing heads to Darlington Raceway in iRacing’s 1987 NASCAR Stock Cars vehicles this week to kick off the Round of 7. The broadcast will start at 8:00 p.m. ET on Podium 2.