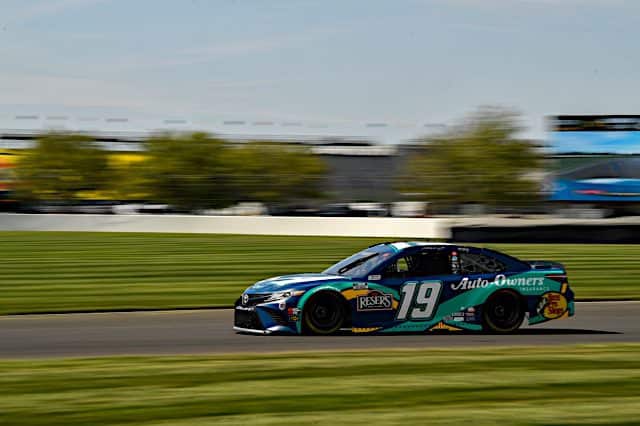 Martin Truex Jr., one of the best road racers in the NASCAR Cup Series, took the top spot in practice on Saturday (Aug. 14), at the Indianapolis Motor Speedway Road Course. Truex’s lap at 98.021 mph topped the charts.

Truex was one of three Gibbs machines in the top 10, but breaking those drivers up in second was William Byron in the Axalta Chevrolet, made famous at the Indianapolis Motor Speedway by Jeff Gordon. His Hendrick teammate and last week’s winner, Kyle Larson, was quickest for most of the session before dropping back to third late with a speed of 97.445 mph. Denny Hamlin was fourth, while fifth was Austin Cindric at 97.137 mph.

Christopher Bell was the next Joe Gibbs Racing Toyota in sixth, followed by Chase Briscoe seventh. Eighth and ninth were Joey Logano and Matt DiBenedetto. Rounding out the top 10 was Tyler Reddick.

Notably, arguably the best road course racer in NASCAR right now, Chase Elliott, failed to post a top 10 or even top 20 lap. He ended up 23rd fastest with a lap of 96.471 mph. However, as he has shown in the past, never count him out based on his practicing or starting positions.

There were a couple of off-course excursions during the session.  Erik Jones spun in turn 10, but continued without damage.  Hamlin also aborted a run after going into the grass in turn 7.

The session saw a number of driver lock up wheels, especially entering turn 1.  Kyle Busch missed the turn early in the session and had to use one of the two bailout routes.  Michael McDowell did the same, as did Cody Ware on multiple occasions.  Austin Cindric locked up and slid into the pavement used for MotoAmerica at turn 12.

With five minutes to go, Bubba Wallace locked up his right front tire entering turn 1 and actually blew it out. Instead of driving back to the pits on the flat tire, Wallace chose to pull off and stop in the grass. That move drew the session’s one and only red flag.

Andy Lally hopped in the No. 78 of Live Fast Motorsports for Kyle Tilley who has a shoulder injury. Tilley later posted on Twitter that he will not run either Xfinity or Cup series race this weekend.

Qualifying for the Verizon 200 at the Brickyard is scheduled for 9:05 a.m. ET Sunday morning.  It will air live on CNBC.