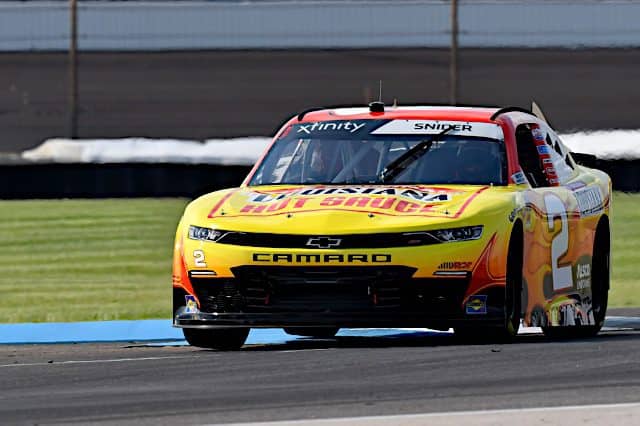 Since then, Snider has managed only three top 10s — until today. On Saturday, August 14, Snider nabbed his sixth top 10 of the year with a seventh place in the 2021 Pennzoil 150 at the Indianapolis Motor Speedway road course.

“We just had a good car; we were top 10 pretty much all day,” Snider told Frontstretch post-race. “Proud of everyone for bringing me a fast Chevrolet. This place is a tough place; it wears out tires really fast. It’s hard to maintain speed here so proud of everyone at RCR for building me a fast car. Crew chief Andy Street, spotter Derek Kneeland, everyone on my team plays a pivotal part in this. I’m surrounded by good people and that’s what makes the difference.”

This race at the 2.439-mile road course featured practice and qualifying. Earlier on Saturday, Snider qualified eighth. He recognized the value of the practice and qualifying, sessions that have not taken place at most races and will not resume for the Xfinity Series until its season finale at Phoenix Raceway.

“I think it’s really important because we were able to try out some stuff,” Snider said. “I picked up some pretty key things in practice. Without it, we wouldn’t have been able to adjust. Practice, I think is really important, at these road courses more than anywhere else. Differences in the car that we needed to fix, handling differences, etc.”

Although he failed to score any stage points, Snider ran inside the top 10 for most of the final stage. At one point, he was even running second to eventual race winner Austin Cindric.

“The RCR guys put together a great car,” Snider told NBC Sports Network post-race. “We had speed the whole run, just needed a little more longevity on it. I tried to baby it as much as I could, be easy on the throttle pedal. Lost a little bit of drive and ended up seventh. Really happy with the speed there. I kept up with the No. 22 [Cindric] and he won the race.”

While he was running in the top five for many laps, the handling on his No. 2 Chevrolet went away, leaving him in seventh. It was his second top 10 in three races as he matched today’s result at New Hampshire Motor Speedway last month.

“Lost a lot of drive there at the end,” Snider told Frontstretch. “We were losing drive all day and nothing we did really seemed to help it out. We still had a lot of speed and I feel like if we could’ve maintained that, we would’ve been good [for a top-five run].”

Finishing one spot ahead of him in sixth place was fellow Richard Childress Racing driver Austin Dillon. Dillon drove for Our Motorsports in this Xfinity Series race, but Snider enjoyed racing the RCR Cup Series driver.

“It’s always good racing with him cause when I’m around him, I can learn from him,” Snider said. “He’s a Cup Series driver. He’s got a lot more experience than I do. Good run overall for RCR today.”

Snider’s run did not come without incident. Immediately after climbing out of his car on pit road, Snider walked over to runner-up AJ Allmendinger to chat.

Ultimately, according to Snider, it’s a racing deal.

“I got into him pretty hard in the race at one point and he got really annoyed with it,” he continued. “So I was just trying to explain to him what happened. The whole time, I never saw the car in front of him stacking him up. I didn’t expect him to back it up that much so he had nowhere to go, I had nowhere to go, just a racing deal. He was really mad about it, but that’s just racing.”

Allmendinger on the other hand remained coy about their conversation.

Snider is assured of his first-ever playoff berth, but he still only has five playoff points via his win. Five races remain in the Xfinity Series regular season, and Snider’s performance at New Hampshire and today leave him upbeat about his team’s momentum.

“It’s very important,” he told Frontstretch. “If we can sneak a win in these couple of weeks, that’d help us out massively. If we can do that or consistently run top five, we’ll be able to really set ourselves up well for the playoffs.”