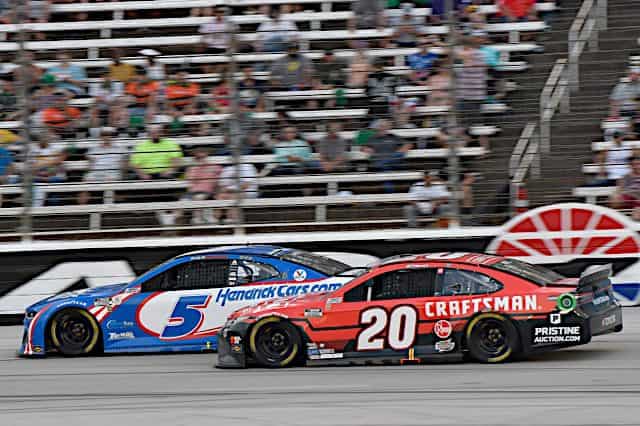 SPEEDWAY, Ind. – What does it take to make Christopher Bell uncharacteristically mad?

A racing rival “going to the media and telling half of the story.”

Especially if that rival is Kyle Larson.

That was the picture painted Saturday (Aug. 14) at Indianapolis Motor Speedway by Bell, who responded for the first time to comments made by Larson Tuesday (Aug. 10) on SiriusXM NASCAR Radio. The Hendrick Motorsports driver had addressed the fallout to their on-track incident in last Sunday’s (Aug. 8) NASCAR Cup race at Watkins Glen International when the two made contact in Turn 1, causing Bell to spin. Larson went on to claim the victory.

“I’d reached out and tried (to talk to him), but I guess he’s not willing to talk to me, which is kind of whatever,” Larson told SiriusXM NASCAR Radio. “I think any other adult in the field would at least have a conversation with you. But he doesn’t care to. … If he wants to get me back, that’s fine. The quicker, (the better). I’m not going to worry about it. If it makes him sleep better at night to ignore me and then want to crash me, so be it.”

By Saturday, they still hadn’t talked.

“At this point, I think we’re both probably over it.,” Larson said. “I don’t really think we need to talk. I’m over it and I’m pretty sure as the week’s gone by I’m sure he’s gotten more over it as well.”

Larson was half right in his assumption.

“I didn’t really think that the incident needed to be discussed or talked about,” Bell admitted.

But then Larson went on Sirius and made a claim that could be construed as him having tried to call Bell to talk it out.

Bell made clear Larson never called him. Instead, Larson sent a text message at midnight while Bell was – ironically – sleeping. He didn’t see until the next day.

Bell called Larson’s text message, which he summed up as “‘sorry, hate I spun you,” as “unnecessary,” but that Larson “running his mouth is a little uncalled for.”

“Never have I ever sent a text message at midnight and complained that the guy didn’t message me back,” Bell said. “First off, I will always try and make an effort to talk to him face-to-face. Or if I can’t talk to him face-to-face, call them. And more than likely leave a voicemail, if I really want to talk about it and I feel like it needs to be discussed, tell them to call me back or whatever. …

“It’s very frustrating to hear that Larson has called me and I’m not answering the phone when that’s so far from the truth,” Bell added. “Like, if he really wants to talk about it, I’ll be glad to talk about it.”

Bell said he tried to call Larson to discuss his comments but he didn’t answer. “He called me back and I had some obligations, and I didn’t pick up either.”

Whether they talk about it sooner or later, the drivers with a deep history of racing each other on the dirt know they’ll be seeing each other often.

Said Larson: “He definitely has made me a better racecar driver today, he’s pushed me to work to be better and I appreciate that competitive rivalry. I’ve got a ton of respect for him on he track. He’s amazing at what he does.”

We’ll see when Bell is behind Larson going into a corner.

That’s the reason why you aren’t out there racing

It’s a long way from Jaws and Big E but NASCAR is tryin.

Cry baby chris is just mad because he plays second fiddle to Larson in every thing, NASCAR, Sprint Cars he can’t even beat Larson in a midget any more. Sour grapes because he can’t beat Larson that is all this is,

This is really reaching as far as trying to create a controversy.