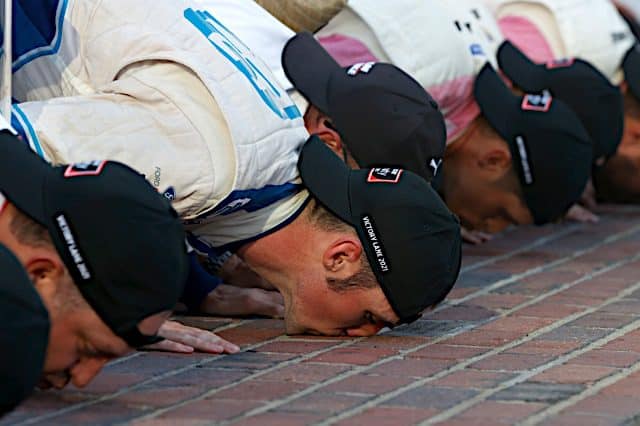 Saturday’s (Aug. 14) doubleheader began with the NTT IndyCar Series’ Big Machine Spiked Coolers Grand Prix, which Will Power, a Team Penske driver, won. Twenty-eight cars were in that race, and four of them were owned by Roger Penske. The Captain had a one-in-seven shot at winning. When the NASCAR Xfinity Series took its turn at the 2.439-mile road course at Indianapolis Motor Speedway, Austin Cindric was the lone Team Penske driver in the 36-car field.

There is already pressure to win when driving for Penske. As if Cindric needed more, IMS is now under Penske ownership, and his corporate teammate won earlier in the day. No pressure for the 2020 Xfinity champion. But Cindric delivered after what turned into the race-winning call to pit on lap 38, three laps to go in stage two. The caution flew on the next lap, which was the de facto end of stage two, and Cindric was able to save his tires. He cycled to the front row on the restart for the third and final stage and soon commanded the race. A caution never came out again, and Cindric cruised to victory in the Pennzoil 150, securing the Penske sweep.

Riley Herbst and Stewart-Haas Racing are picking up momentum at the right time. Herbst qualified sixth and nearly won stage one of the race, finishing second to Haley, who had fresher tires. He then finished ninth in the second stage, collecting a total of 11 points. That number alone is important because, after Saturday’s Pennzoil 150, Herbst is now 10 points above the cutline over Michael Annett. Unfortunately for Annett, he had to sit out this race due to lingering pain from his leg injury. Annett didn’t even start the race to be the driver credited with the points. That means he earned zero. Herbst finished eighth, his seventh top 10 of the season, and fourth in the past eight races.

He turned a 30-point deficit to Annett before the race to a 10-point advantage with five races remaining in the regular season. He caught a lot of criticism earlier in the season because the team he drives for won nine races in 2020. Herbst hasn’t come close to winning this year but making the playoffs is half the battle to win the championship. He now holds the upper hand in the cutline battle.

Watching, or instead not watching, Michael Annett today was hard. Five weeks ago, Annett had a semi-comfortable 67 point lead over the playoff cutline. After missing three of the past four races, he is now 10 points below that cutline. Annett has turned into one of the more consistent drivers in the Xfinity Series and provides stability for his No. 1 JR Motorsports team. To see him pushed back on his heels due to an injury so late in the season is difficult to stomach because of his early-season consistency. It makes you wonder if he had just started the race, what kind of points shape he could be in after having a road course master like Elliott finish the race. Even if Elliott could only muster up a top 15, that’s at least 20 points to Annett’s credit he didn’t have before. Obviously, the cards were not aligned for Annett to start, and Elliott relieve.

The curbs were a significant issue in Saturday’s Pennzoil 150. On the first lap of the race, a small orange turtle on the outside of the exit of turn 6 caused multiple cars to go airborne and eliminated four cars before a single lap was completed. Brandon Jones, Preston Pardus, Brandon Brown, and Kevin Harvick parked their cars behind the wall without ever seeing lap two. FOX Sports’ Bob Pockrass tweeted, “The curb is there so they (the drivers) don’t use the grass.”

The curb is there so they don't use the grass.

On the NBC broadcast, commentators shared that the turtle was installed to keep cars off the more deteriorated asphalt. The ironic thing about both of these reasons is that drivers tend to avoid grass – especially when it lengthens their lap – and that the drivers were still using the rougher asphalt. The two reasons given for this one particular turtle were foolish.

Sam Mayer came out on the wrong side of a battle with Elliott when he had to make a split decision to hit the turtle or turn left into the grass. He chose the latter, lost control of his car, and crashed into the barriers. Mayer limped his car to the infield access road at the end of the backstretch at turn 7, and his day was over. Had the turtle not been there, he and Elliott would have continued their battle side-by-side towards turn 7.

Then later in the race, Kris Wright flew over another curbing on the inside of turn 6, the second turn in the kink on the backstretch. His car went completely airborne and slammed back onto the ground. To the credit of NASCAR and IMS, this curbing made more sense but still can do just as much damage as the orange one mentioned above. It was there to discourage drivers from cutting the corner.

Almost immediately following the race, track crews were seen removing the orange turtle on the exit of turn 6 and later the curbing on the inside of turn 6. NASCAR realized its mistake and corrected it. The situation is still an ugly one because race cars were ultimately torn up for no reason. That part of today’s story isn’t changing. But tomorrow’s story is changing because drivers will no longer have obstacles in their path.

NASCAR is removing the orange rumble strip outside of turn 6.

I’m not giving this accolade strictly to a driver, but rather a team and crew. B.J. McLeod Motorsports earned its seventh all-time top 10 in Xfinity Series competition. Before 2021, the team had earned three, and all were at superspeedways. Entering Indianapolis, the team earned top 10s at Circuit of the Americas and Road America with Kevin Harvick and Charlotte with Chase Briscoe this season. Those cars were prepared by Stewart-Haas Racing and entered as B.J. McLeod Motorsports Fords. Today, Andy Lally earned a top 10 outright with a Chevrolet prepared by the crew at B.J. McLeod Motorsports. They were happy in each of the team’s previous three top 10s this season, but this one will likely mean that much more, knowing that the car came from their craftsmanship. The crew did their job, and Andy Lally earned a fifth-place finish in stage two before finishing the race in 10th.

Harvick’s day ended after one lap after suffering too much damage from the orange turtle on the exit of turn 6. He planned to gain experience for Sunday’s Verizon 200. That didn’t happen. Josh Bilicki also was involved in the lap 1 turtle mayhem but managed to continue and finished 25th. James Davison replaced Kyle Tilley in B.J. McLeod Motorsports No. 5 Chevrolet and brought the car home 18th – its fourth-best result of the season.

Austin Dillon was behind the wheel of Our Motorsports’ No. 23 Chevrolet and brought the car home sixth. He spun in turn 1 on lap 34 and pitted before the conclusion of the second stage, like winner Cindric. He benefited from the gained track position and maintained a top 10 running position in the final 19 laps of the race.

Elliott got a call very early in the morning to sub for Annett, who was still suffering from a leg injury. Elliott qualified the car 25th and slowly made his way forward. On the lap 24 restart, Mayer spun him in turn 7, but Elliott was quick to recover. Like Cindric and Dillon, Elliott pitted on lap 38 before the caution. That helped him earn free track position and ran as high as third but ultimately settled for fourth after yielding to a faster Haley.

Xfinity Series regulars Allmendinger, Haley and Cindric will be in Sunday’s Verizon 400. It will be Cindric’s final Cup Series race of 2021. Lally is now also racing in the inaugural Cup Series race on the Indianapolis road course. He will drive the No. 78 for Live Fast Motorsports in place of the injured Tilley.

After being asked by Dave Burns about singing “Back Home Again in Indiana” on the radio after winning, “I didn’t even know I knew the words that well, at least remember them that well. Hopefully, I didn’t make Jim Nabors roll over in his grave. I know I was here (IMS) the last time he sang the song. It gives me goosebumps every time. I’m sure it does everyone else.” – Austin Cindric

“I just saw you had a discussion with Myatt Snider. What was the discussion between you two?” – Parker Kligerman
“I just told him I liked his flames on his car.” – A frustrated AJ Allmendinger

“I was still asleep this morning when I got the call. I rolled over, and I had ten missed calls, and one was from Chad Knaus. [That] was the last one I saw. I was like, ‘I’ve done it. I’ve slept through practice, and I’m getting fired. It happened today.’ That’s like [a] nightmare to a racecar driver.” – Chase Elliott

Allmendinger said it best after the race, “It’s tough sometimes with these road courses in the Xfinity Series with the way these stages line up, cause you either win the stage and you are {kind of} hurt for the next stage.”

I’ve mentioned this before, and I’ll mention it again; road course races should only have one stage, no matter the series. The lone stage should be placed to guarantee a pitstop before the stage break or at least one before the race’s conclusion. Two stages can be either predictable or too unpredictable. Had there only been one stage, I bet there would have been a better race for the lead amongst the best cars, Allmendinger, Cindric, and Haley.

After having its 2020 race relocated due to the COVID-19 pandemic, it’s the first time for the Xfinity Series field to return to Brooklyn, Michigan’s 2-mile Michigan International Speedway. Joe Gibbs Racing and Richard Childress Racing are the only teams to taste victory since 2014, with Tyler Reddick being the most recent winner in 2019. The New Holland 250 is on Saturday, August 21, with a scheduled green for 3:30 p.m. ET. After Michigan, only four races will remain in the regular season with visits to Daytona International Speedway (Aug. 27), Darlington Raceway (Sep. 4), Richmond Raceway (Sep. 11), and Bristol Motor Speedway (Sep. 17).