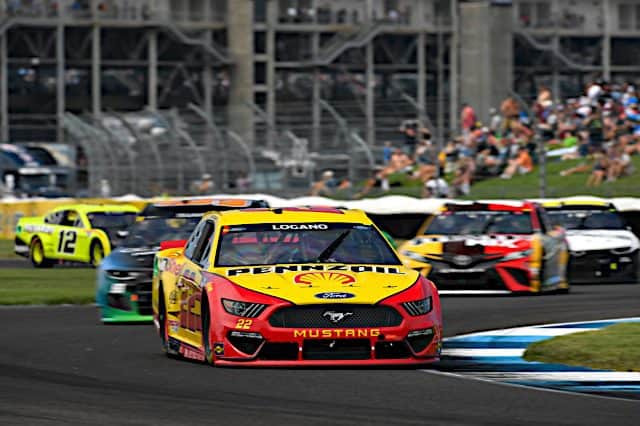 SPEEDWAY, Ind. — As the inaugural NASCAR Cup Series race at the Indianapolis Motor Speedway road course hit less than 10 laps to go in its scheduled distance, a debris caution wiped away Hendrick Motorsports’ dominance up front.

Who knew it was also about to wipe away half the field, causing millions in sheet metal damage.

One lap after the restart, with less than six laps remaining, William Byron hit the turn 6 curb, turning it to rubble. Calamity ensued behind him Sunday (Aug. 15) in the Verizon 200, changing the outcome of the race.

Among the drivers involved were Byron, Christopher Bell, and Joey Logano.

The curb comes up, debris goes everywhere, and multiple cars are collected – with Joey Logano going into the tire barrier. #NASCAR

The event was subsequently red-flagged for nearly 20 minutes while track staff worked to repair both the tire barrier and the curb.

That turn had been problematic all race weekend, with both the NTT IndyCar Series and the NASCAR Xfinity Series racing on the road course the previous day.

On Saturday, Scott McLaughlin and Kris Wright both launched their cars into the air after hitting the curb. After those two races, NASCAR officials altered the course by removing the orange rumble strip outside of turn 6.

Obviously, the alteration failed to save numerous drivers from prematurely ending their respective races with torn-up race cars.

After a multi-car wreck courtesy of the Turn 6 curb, some teams already loaded their cars into the haulers at @IMS.#NASCAR #Verizon200 pic.twitter.com/X1fUmTHDh5

Byron, who unintentionally started the melee, simply stated he hit it, not thinking it would damage the curbing.

“Where I was, I wasn’t even close to the far side of it [the curb],” he said after the race. “The whole thing came loose so it was one of those deals, I guess.”

Logano, whose No. 22 Ford had to be removed from the tire barriers, said the unraveling of the curb surprised him.

“Most of the time, when you hit a curb, you know it’s coming,” he explained after emerging from the infield care center unhurt. “You must’ve made a mistake to hit it. None of the cars in front of me and I made a mistake when the track came apart when we hit it.”

The accordion effect collected Bell, who too knew ahead of time that the curb had been problematic on Saturday.

“It’s a lot of what happened yesterday in the Xfinity race,” Bell said after his discharge from the infield care center. “You’re blind when you’re tucked up behind guys like that. Everyone was running their normal line and the curb came up in front of William [Byron]. He hit it and everyone crashed behind him.”

After thinking about his wreck, Logano chuckled, “Cool.”

"Next thing I knew, I was airborne."@JoeyLogano on the wild wreck at @IMS. #NASCAR pic.twitter.com/qfzDIDwmJ9

He walked away from the hard hit, but the end result was still a DNF.

“The tire pack is surprisingly soft when you hit that,” Logano told media members. “It still stops in a hurry but it wasn’t as bad as I thought it would be as I went into that wall. I had a lot of time to think about it. It’s not fun, I’ll tell you that. It’s like being a passenger in the car. Once the front tires stop working, the brakes don’t work, the steering doesn’t work, I might as well have been sitting in the passenger seat.”

“Our cars just hit that area so hard, we’re going so fast, and we’re bouncing around there. With 40 cars hitting it every lap, something was bound to happen.”

The curb disintegrating ended solid runs for a number of playoff-bound drivers, including pole sitter Byron who was in position to score his best ever road course finish.

“It was just tough,” Byron said about the curb leaving him with a DNF and an ultimate 33rd-place result. “I thought we had a really good car, positioned ourselves well to be up front and to have something like that happen definitely stinks. Move on to Michigan [International Speedway] where I think we’ll be really fast.”

“It was ok, it was hard to pass. I really didn’t get close to any cars all day and I got separated when I was in the top three,” he explained. “[Kyle] Larson, Chase [Elliott], and I got out front but I couldn’t make ground up.”

Moreover, because Byron’s been successful on both the road course and the oval, he couldn’t decide which layout to use in the future.

According to Logano, the 2018 Cup Series champion, this race should stay on the road course, with one change: “I’d just get rid of the curb.”

Before the race restarted, track officials attempted to fix the turn, mangled metal still showing the ill effects of drivers hammering it for 70-odd laps.

The damaged curbing is being towed away. It’s smoking. #NASCAR #Verizon200

As the field reached turn 6 after restarting, another wreck collected Daytona 500 winner Michael McDowell and Austin Dillon, the latter of whom is currently battling for a playoff berth.

“It really started before that,” McDowell said after he left the infield care center. “We were two and three-wide. I just got turned a little bit by somebody and as I gathered it up, I was square with the curb so I knew I was in trouble. It’s unfortunate; we had a fast car all day. Looking like we were going to get a top 10, those restarts are so chaotic. You knew you had to be prepared. But where I got turned, I couldn’t get it turned right before I hit the curb.”

McDowell wasn’t thrilled, acknowledging the uncertainty affected the field as they wheeled their cars to that spot on track.

“The circumstances at the end weren’t ideal,” he explained.

The wreck left Dillon with a 31st-place finish and 23 points, 13 fewer than his teammate Tyler Reddick as both drivers seek a spot in the playoffs. He now is 28 points behind Reddick below the cutline.

Displeased with the wreck, Dillon told Frontstretch, “I wish we were at the oval.”

What a disaster. Brickyard owes NASCAR and fans an apology. They totally ruined the race.