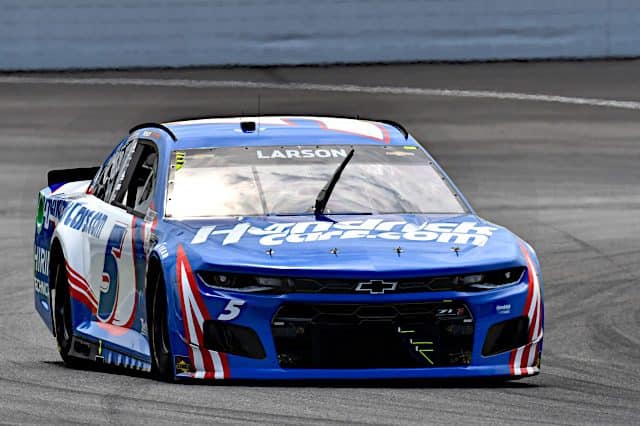 1. The Turn 6 curb was not appealing

If you have seen the highlights, you know one of the premier storylines from this historic 2021 August edition of racing at Indianapolis Motor Speedway. Turn 6 was problematic all race weekend, from the second either a NASCAR or IndyCar turned onto the asphalt.

Scott McLaughlin and Kris Wright both launched their vehicles in their respective races on Saturday (Aug. 14). NASCAR officials tried to rectify the issue before the NASCAR Cup Series race by removing the orange rumble strip.

Except the attempt did not solve the problem for Cup. There were back-to-back multi-car wrecks, the second one occurring after series officials removed the curb entirely. Drivers left the infield care center upset, frustrated and concerned about that area of the track.

After the race, track president Doug Boles and NASCAR Senior Vice President of Competition Scott Miller addressed media members. Boles affirmed it was a surprise that the curb deteriorated the way it did. Furthermore, Miller emphasized it was necessary to slow down cars’ speed.

“There was a big ask for the drivers to have something back there,” Miller said, “Because that section was just way too fast, there was that grass, and going into turn 7, they probably would’ve been running 15-20 mph faster.”

So, was it a necessary risk? Is it necessary in the future?

“This is where it was one of those deals where you take a lot of learnings away and put on a better event, obviously avoiding the problems that we had today,” Miller continued.

I’d agree with that. So here’s what I’d do. These drivers are professionals; perhaps NASCAR ought to treat them as such with no curb next year and allow it to police itself.

Looking beyond #Curbgate, there were no cautions due to tire failures at Indy, and there were only six cautions overall in the Cup race. The last time there were six or fewer cautions on the oval was in 2014. In that regard, this weekend could be considered successful.

“The energy level of our fans today was unbelievable,” Boles said. “There were all kind of positives. Our tickets were up 20% today over yesterday. So, this is one of those events that we have made the right decision for now. I think we want to have it back again on the road course.”

2. Kaulig Racing will be a force to be reckoned with in the Cup Series next year

AJ Allmendinger’s victory marked the first Cup Series one for Kaulig Racing, but it will not be the last.

FIRST EVER @NASCAR CUP SERIES VICTORY, AND AT THE BRICKYARD NO LESS?!

THE FIRST OF MANY FOR KAULIG RACING IN THE CUP SERIES!! ?#TrophyHunting | #Verizon200 pic.twitter.com/M7gWZi7Fz8

This top-tier Xfinity Series team has two charters for next year with Justin Haley slated to compete full-time.

Next year marks the arrival of the Next Gen car. So, unlike new teams Trackhouse Racing, Live Fast, and 23XI Racing, Kaulig will join the Cup Series when everyone has a blank slate on the new car. It is an advantage to this team.

Furthermore, Haley has made 24 career Cup Series starts with two career top 10s. Those were a win in a weather-shortened race at Daytona International Speedway in 2019 and this Indy road course race, where he finished eighth. A NXS Championship 4 driver last year, Haley has proven talent, and he will be one to keep an eye on next year.

Before the wild ending at Indy, Kyle Larson, Chase Elliott, and William Byron ran 1-2-3 before debris brought out a caution flag. Of course, then chaos with the turn 6 curb ensued.

Hendrick Motorsports is running 1-2-3 with 37 laps to go and honestly would probably be running 1-2-3 if this race was on the oval, too. Just that kind of year for HMS.

In the end, Larson led a race-high 28 laps with a third-place finish while Elliott led 14 laps and finished fourth. Byron won the pole, though he was collected in one of the turn 6 crashes and wound up with a DNF.

There is only one remaining road course on this Cup Series season, run at the Charlotte Motor Speedway ROVAL. A win by a Hendrick driver there both would guarantee a Round of 8 berth, provided they advance past the first round, plus five more playoff points. Playoff points matter as drivers seek to advance to the Championship 4.

Larson, Elliott, and Alex Bowman all have at least 10 playoff points, and Byron has 15 top-10 finishes, two shy of the most. Their combined consistency has them well-positioned to advance throughout the playoffs.

The NASCAR Xfinity Series regular season has five races left. Its playoffs begin after both the Cup and Camping World Truck series playoffs.

It’s a weird portion of the schedule as the buzzword “playoffs” aren’t as pertinent yet when that word is abundant in coverage of the other two.

The current playoff situation is so weird, lol.

It all comes together in the fall, but it's awkward now.

To make this Xfinity Series playoff picture even more strange, 10 of the first 21 races (47.6%) have been won by drivers who are not competing full-time. Kyle Busch has five victories, Ty Gibbs has three while Christopher Bell and Josh Berry have racked up one win apiece.

Gibbs is also entered in the upcoming race at Michigan International Speedway as well as Cup Series regulars Tyler Reddick and Bubba Wallace. Those three could earn the victory, thereby making half of this season won by non-series regulars.

The Xfinity Series contenders for the title seem straightforward. Austin Cindric currently is tied with Busch for the season-most wins, making him a solid favorite. Allmendinger and his Kaulig teammates Justin Haley and Jeb Burton have been fast, in position to fill out the other Championship 4 spots. Justin Allgaier also has two wins and his 11 playoff points are third-most among series regulars.

Beyond that? Myatt Snider has one win, Daniel Hemric has led the second-most laps, albeit without a victory, and Harrison Burton is fifth in the points. But none of those three, as well as the rest of the field, have regularly contended enough to make a championship-winning run. As Matt Crafton showed in 2019, a championship does not require a win, but I’d consider a run unlikely from this trio.

5. Is it win Daytona or bust to make the playoffs?

There are only two races left in the Cup Series regular season, at Michigan and Daytona International Speedway. Kevin Harvick has won the last three races at Michigan, and the only other driver in the top 16 besides Tyler Reddick who has not won at all this year is Denny Hamlin, who just clinched his playoff berth.

Reddick has an Xfinity Series win at Michigan while Austin Dillon has only two top fives and five top 10s. I do not expect that 28-point difference to change much there.

For everyone else, Daytona seems to be their last chance to make the playoffs. To NASCAR’s credit, their desperation is what series officials want. But don’t get too excited for an upset winner in a pack race just yet. Only six drivers currently below the playoff cutline have won in the Cup Series before: Dillon, Chris Buescher, Ricky Stenhouse Jr., Erik Jones, Ryan Newman and Cole Custer.

While an underdog such as Anthony Alfredo would love to pull an upset to make the playoffs, realistically, there is a reason all Cup Series champions are above the playoff cutline: they’re that good.

6- IF FRONTSTRETCH ADDS ONE MORE POPUP AD, THEY WILL HAVE ONE “1” LESS FOLLOWER !!

Same here. I also do my best to avoid those who advertise on the pop ups.

1 “There was a big ask for the drivers to have something back there…” The drivers asked? Why isn’t there a permanent curb like the Watkins Glen Bus Stop? Put tire walls like at the carousel at Sonoma?

2 Kaurig Racing ran four races this year. Three were road course and AJ has always been a road course ‘ringer’. Why will they have to be reckoned with next year.

3 Hendrick Motorsports’ dominant. You have to finish 1,2 and 3 for it to count.

5 Daytona. Because of the type of racing at Daytona, there are always flukes with the final outcome. A big wreck puts the good cars in the garage with also runs at the front. Probably the best place to have a made for tv finale for the season.