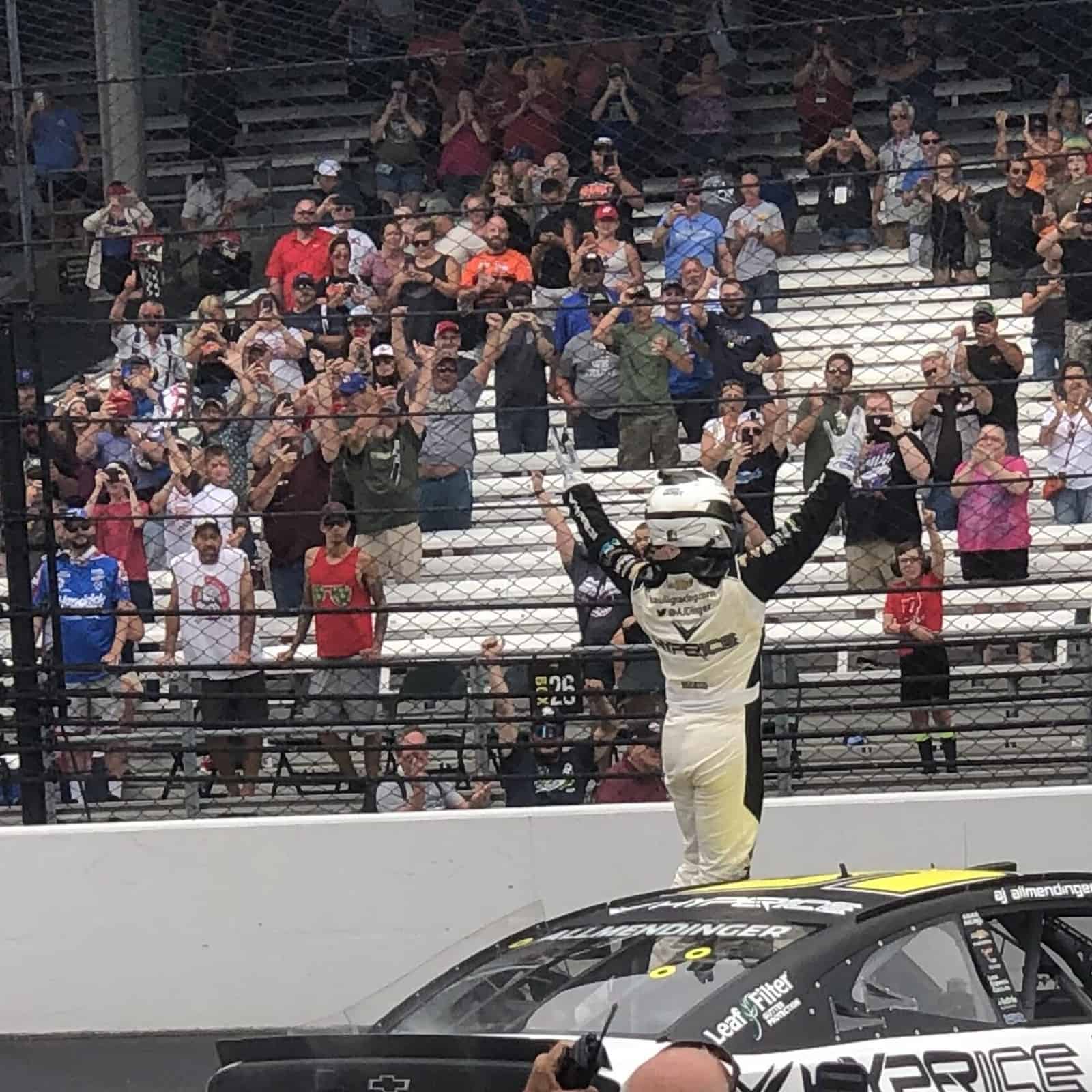 SPEEDWAY, Indiana —  On Saturday evening (Aug. 14), AJ Allmendinger didn’t have much to say.

After finishing second in the NASCAR Xfinity Series race on the Indianapolis Motor Speedway road course, the 39-year-old veteran was “disappointed.” Disappointed in the way he made a “mess” of the race early on, disappointed that Kaulig Racing’s race strategy didn’t pan out and disappointed he never had a real shot at the win.

“I got to be better in the racecar,” a deflated Allmendinger said before departing pit road.

Twenty-four hours later, Allmendinger was “at a loss for words” for all the right reasons.

At the end of a chaotic, destructive final 16 laps, Allmendinger took the lead in overtime and roared to victory in the inaugural NASCAR Cup Series race on the road course. It was his second career Cup win, the first in seven years and first since leaving the series full-time at the end of the 2018 season.

The way it happened was almost surreal. He had been third on the final restart until Chase Briscoe spun Denny Hamlin from the lead and later pulled up lame in turn 12 to serve a penalty for cutting the course.

Kaulig Racing’s No. 16 crew, led by team owner Matt Kaulig and president Chris Rice, gathered at Indianapolis’ pit wall in celebration of their first Cup Series win, coming in just their seventh attempt and months away from the start of its first full-time campaign in the series.

“We done won a Cup race!” Rice bellowed. Of the moment, he later shared, “I thought I was going to throw up walking down pit road.”

As Allmendinger celebrated behind them, the team circled up and placed their hands on top of each other.

Kaulig, an Ohio native who grew up attending the Indianapolis 500 every year and who was at the inaugural Brickyard 400 in 1994, called the moment “mind blowing.”

‘We got great people,” Kaulig told Frontstretch. “Standing out here with all of our Kaulig Racing people, and all of our partners at ECR and Chevrolet, it’s no wonder we can [win].”

For Allmendinger, the 24-hour swing in emotions comes with the territory.

“We all know this is what we love and hate about racing,” Allmendinger told NBC Sports Network. “It can just bury you in the ground and then, you have moments like this where you just forget about every bad emotion, every low moment you’ve ever had because all it takes is one victory like this, especially at Indy.”

The win came in Allmendinger’s 15th start in a race held on the grounds at Indianapolis Motor Speedway, including the 2013 Indianapolis 500.

“To me, this is the biggest place in the world,” Allmendinger said. “If you told me I have to win at one place, this is where I want to win. It erases all that bad feeling, and this is why I come here and do this.”

Allmendinger never had the best car Sunday. After starting eighth, he assessed his No. 16 Chevrolet was a seventh to 10th-place car. But a speeding penalty on lap 19 sent him to the rear of the field. At that point, he thought he could pull out a “solid” day by getting to the “edge” of the top 10.

Following a debris caution with 10 laps to go in the scheduled 82-lap distance, wrecks involving nine and seven cars broke out due to a faulty curb in turn 6. With each wreck, Allmendinger crept up through the field. Over the course of the final three cautions, Allmendinger maneuvered his way from about 17th to third.

“The best part is when you got Matt Kaulig and Chris Rice getting on the radio and just going ‘Hey, we’re not here for friends, we’re not here for points, we’re here to win this race, so we need to basically bring you back on the hook,'” Allmendinger said. “That kind of frees up a racecar driver to go after it and I just can’t can’t believe the way it played out.”

Like his first Cup win in 2014, with JTG Daugherty Racing at Watkins Glen International, Allmendinger’s triumph was a byproduct of a two-lap shootout to the checkered flag.

But the emotions tied to them are complicated.

“I think Watkins Glen was something that … in a way, it was kind of almost like a relief … like I don’t ever have to be asked about ‘will you ever win a Cup race?”‘ Allmendinger said. “So you enjoy it, but at the same point you’re kind of like, ‘OK, thank goodness now, the relief is gone, I don’t have that hanging over me anymore.’ So it kind of takes a little bit of the enjoyment away.

“This is, I’m like, I don’t even know — we know showing up at the road course races we have fast racecars, but like at Indy, the way that played out, this is just pure enjoyment.”