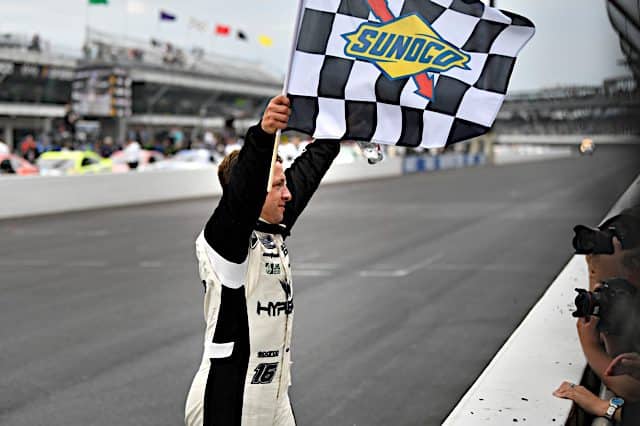 AJ Allmendinger may be competing for the championship in the NASCAR Xfinity Series but he still occasionally finds time to dabble in the sport’s top level. After Sunday’s (Aug. 15) NASCAR Cup Series race on the Indianapolis road course, he’s quite glad to have participated in that one. Allmendinger picked up his second career win, surprised as anyone to double that NASCAR stat after one of the more bizarre endings to a race in recent memory.

The victory is the first for Kaulig Racing in Cup and it came down to being one of the few cars to avoid trouble during the race. Some were demolished by the massive curbs installed along the Indianapolis Motor Speedway road course, particularly the one in turn 6, while others were launched skyward when they hit the curbing at speed. Not to mention, a dust-up between two winless drivers in Chase Briscoe and Denny Hamlin heated up in the closing laps. Their contact (plus Briscoe’s penalty) meant the seas parted, giving Allmendinger a clear path to the win.

It has been more than seven years since Allmendinger picked up his first Cup win at Watkins Glen in 2014. That win was also the first (and so far, only) triumph for JTG Daugherty Racing. The seven years between victories marks the longest span between a driver’s first two Cup wins, breaking the previous mark set by Martin Truex Jr., who won his first in June of 2007 and his second in June of 2013.

Allmendinger only led two laps en route to the win at Indy, the fifth time in 2021 that a race was won by a driver who led five laps or fewer. Interestingly, three of those five have been on road courses while the others are the two superspeedway races run thus far. Chase Elliott and Christopher Bell each led five times around Circuit of the Americas and the Daytona road course, respectively. Michael McDowell won the Daytona 500 and Brad Keselowski won at Talladega Superspeedway, each leading only the final lap of those pack races.

Justin Haley finished in the top 10 for just the second time in his Cup career, coming home eighth. It was the first time he had finished better than 11th since his stunning win in July 2019 at Daytona. His previous high for 2021 was a pair of 24th-place showings, so calling it the high point of the year for him in Cup might be a bit of an understatement.

One spot behind Haley was Austin Cindric, who earned his first top-10 finish in a Cup Series race after seven attempts. Even a quick spin didn’t derail his efforts as he recovered nicely for ninth. Prior to Sunday, the 2020 Xfinity Series champion’s best result was a 15th in his Cup debut at the 2021 Daytona 500. Strangely, that performance wasn’t even exactly a “finish”, as he was taken out in a crash on the final lap and never made it to the checkered flag.

It’s been an even better year for Cindric on the Xfinity side. He scored his fifth win of the year at Indy, leaving him one short from matching the total he collected last year on his way to the series title. Sunday was his last Cup start before taking over the legendary No. 2 Ford for Team Penske in 2022.

With only two races left until the playoffs start, all but two drivers are locked into the field. Two of those, McDowell and Bell, will be making their first playoff appearances. If Tyler Reddick should get the final spot, it would make for three playoff rookies, the most since four drivers made it for the first time since 2016.

Josh Bilicki was also in the “best career finish” club at Indianapolis, coming home 18th. Bilicki had made 58 starts coming into the race this weekend but had never ended up higher than 23rd in the final rundown. It was also the best result for a Rick Ware Racing car outside of a superspeedway event.

Winning the pole for the Cup race gives you the best starting spot and the most desirable pit stall but it hasn’t translated to much success in the race. In the past six events, the pole winner has only finished better than 19th once and four times, the first place starter has wound up in the thirties. Might be better to purposely shoot for that second position on the grid.

I think the 00 Quin Houff also had had his best finish. And even before the attrition at the end, was having a pretty good race. Never more than a lap down & with the yellows finished on the lap lap with the car pretty clean.