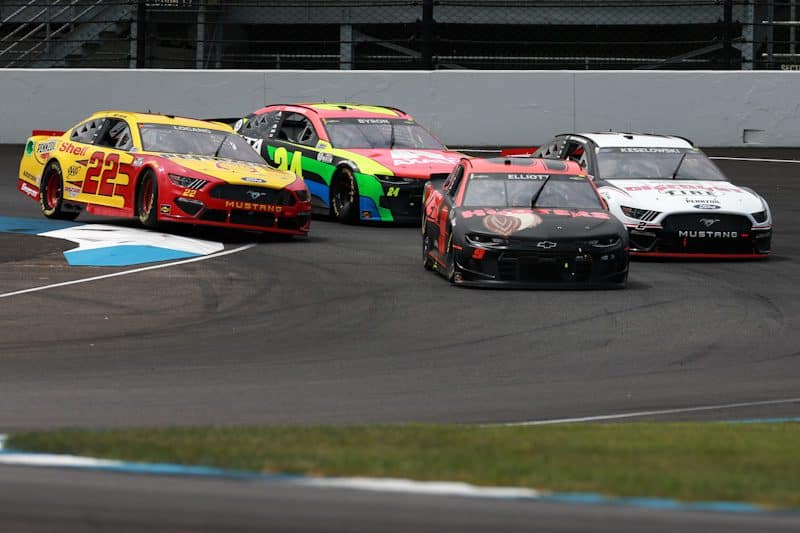 NASCAR’s Cup Series season has included a stop at Indianapolis Motor Speedway every year since 1994.  Traditionally a 400-mile race on IMS’ famed oval, that event was created to become a crown jewel of the sport.  Instead, for decades, it’s fallen under fire from critics, claiming it was often a four-hour parade that failed to meet expectations. In response, NASCAR tried something totally new this season, switching to the 2.4-mile road course in an attempt to reignite interest in the speedway.

But after Sunday’s sorry finish, and the events leading up to it, it’s clear NASCAR does not know what to do with Indianapolis.

On paper, the IMS road course looked like a great plan.  NASCAR first tried the layout last season in the Xfinity Series, where a fantastic finish obscured memories of a lackluster race.  When it came time to put the 2021 season schedules together, NASCAR opted to have both the Xfinity and Cup series on the road course.  The idea was to meet the growing demand for this track type among the fan base while maintaining NASCAR’s presence at IMS facilities.

Interestingly, NASCAR did not choose to keep IMS’ new date from last season.  The Xfinity Series road course race happened to be held on Independence Day, with the Cup Series race taking place the following day on the oval.  That was a first for IMS, which had held a September date for the previous two seasons after NASCAR moved the Brickyard 400 from its customary early August slot.

The previous plan was to hold the Brickyard 400 as the last race of the regular season, hoping to inject some excitement and urgency into the race while increasing fan attendance at the track.  Since going to Indianapolis for the regular season finale only lasted two years, it is safe to say NASCAR was not encouraged by what it saw.

The Independence Day weekend date was supposed to fix years’ worth of Indy woes.  NASCAR heavily promoted the Brickyard 400’s reassigned date as the start of a new tradition and an era of rejuvenated interest in the speedway.  But that new tradition only lasted one year.  It’s a shame NASCAR broke the tradition of racing at Daytona International Speedway around the Fourth of July, one of the longest-running track/date pairings in the sport.

It was an even bigger shame COVID-19 prevented any fans from attending last year’s races at IMS in person.  You would think that if NASCAR was so committed to making the Independence Day slot at IMS work, they would have at least tried it one season where fans could attend.  Instead, Road America got the Fourth of July date for this season, with IMS taking a slot in mid-August, just a week or two after its typical date.

So, without a holiday weekend or a prime position on the schedule, NASCAR turned to the road course layout to justify another trip to IMS.  Promos for Sunday’s race often invoked the history of the Brickyard, both for stock car and open-wheel racing alike.  But the NBC crew also brought out that “new tradition” phrase a couple of times.  Fans were promised an action-packed weekend of road course racing at the most storied motorsports venue in America.  On paper, that all sounds great.

The trouble is that the road course is not what makes IMS special.  The Brickyard has earned its place as the most famous track in the United States because of the history of the oval layout.  A race on the road course cannot claim the legacy and prestige of an event like the Indianapolis 500, or even the Brickyard 400.  Sunday’s race felt like the equivalent of holding a horse race in the parking lot of Churchill Downs and claiming that event is a successor to the Kentucky Derby.

It’s no wonder several drivers voiced their disappointment earlier this week about not getting to race on the oval.  Sure, there are plenty of Brickyard 400s that have been duds from an entertainment standpoint over the years.  But characterizing a race at the IMS road course as having the same significance as the oval is NASCAR attempting to have its cake and eat it, too.

The race itself produced some memorable moments, if not always for the right reasons.  The early laps featured plenty of good racing and compelling strategy.  Yet all of it will likely be overshadowed by the last 20 laps of the race, most of which turned into a demolition derby.  Problems with the curbs in turn 6 led to several violent crashes that necessitated long cleanups.

The leaders who did not get launched into the air or into the tire barriers by the troublesome curbs wound up running off course and into each other in a series of desperate attempts to reach the finish line first.  Give AJ Allmendinger a lot of credit for keeping a cool head in a situation where everyone around him did not.

If NASCAR wanted an entertaining weekend above all else, it met its goal.  But the level of racing that we saw at the end of Sunday’s event (Aug. 15) was a poor representation of what the drivers, and NASCAR itself, are capable of doing.  If the sport returns to the IMS road course next year, it will have to figure out a better plan for the curbs in turns 5 and 6.  It is one thing to have them positioned awkwardly on the track, but being a danger to the drivers because of wear and tear, or poor installation, is a serious problem.

Additionally, NASCAR needs to standardize penalties for what happens when a driver cuts a corner, so there are no repeats of Chase Briscoe’s scenario.  Some fans may argue Briscoe should have assumed he would be penalized for cutting off turn 2, but that was not a reasonable conclusion for him to draw in the heat of battle.  As we saw earlier this season with Ross Chastain at Sonoma Raceway, it is not always a given NASCAR will issue a penalty for cutting a corner at a road course.

That’s especially true in this case, when Briscoe was arguably forced off course and Chastain clearly was not.  As for the incidents between Briscoe and Denny Hamlin, it is (or should be) up to the drivers themselves about how that will be settled.

Even with some interesting storylines emerging from Sunday’s race, this weekend does not feel like a positive one for NASCAR.  If the sanctioning body is committed to the road course, it will likely have to find a workable solution for limiting carnage at a track where the needs of IndyCar will always come first.  As for revitalizing the Brickyard 400 on the oval? That’s felt like a lost cause since 2008.

After 27 years, NASCAR has tried everything to drum up fan interest in racing at Indianapolis.  If date swaps and new aero packages could not do the trick, the sanctioning body would not have abandoned the oval in the first place.  Bringing NASCAR back to Lucas Oil Raceway would be a fun solution, but the facilities there would have to be updated, and unfortunately, that is outside of NASCAR’s control.  And, if NASCAR were to invest in LOR again, it would probably mean leaving IMS entirely.

Ultimately, this weekend feels like NASCAR has lost its way in Indianapolis.  It was clear that the sanctioning body was unprepared to manage the circumstances that impacted the end of Sunday’s race.  Hopefully, they’ll learn from this experience and put on a better race at the IMS road course in 2022.  Yet given how quickly NASCAR seems to change its mind about racing at the Brickyard, you wonder if another “new tradition” will last beyond this year.

If NASCARs product on a regular track was thrilling, no need for teams to go the extra mile for a shit show and the promo of a shit show. Yet that is NASCARs model…what happened at the end was just wrong. People got screw, major damage all because of…………………dammum. WTF?????????

My feeling is that if the curb and turtles weren’t there, the race would have been pretty good… definitely better than racing has been on the oval. But changing the venue to a track suited for stock cars would be my preference.

And I’ll say it now, street racing in Chicago or anywhere in Nascar, will be another joke put on by these clowns. Is Brian France really out of the picture !!!

Brian France has not had any position with NASCAR in year’s. His uncle and assorted family run the organization.

Road course racing at Indy? Really? That race SUCKED!!! Memo to NASCAR and IMS, bring the Brickyard 400 back! I don’t care what these so-called “experts” think. You DO NOT replace an oval race with a road course race! This is NASCAR (as in stock car racing), NOT FORMULA 1! Also, the trend of scaling the distance of race (or races) back needs to stop too. Example, Rusty Wallace in 2003 stated Pocono’s races at 500 miles were too many miles for racing.I say hey Rusty, TOO BAD!!!!! Mind your own damn business! Indy simply needs to go back to where racing really belongs, ON THE OVAL!!!!! Hey NASCAR, WAKE UP!!!!!

Rusty was right and still is. He knew that none of them were “racing” until the last 50 miles or so anyway. Like that on most ovals even now.

If they didn’t scale the distance back that would have been a 10 hour race at best yesterday, most likely even longer.

I’ve been to Indy for over a dozen NASCAR races. It was clear the tire debacle was the event that sent it spinning downhill. The huge crowds suddenly disappeared in a year’s time. The race was poor. There was little to no passing, but as usual NASCAR took years to figure out it couldn’t do better. By that time, there was almost nobody left attending the race. You are right about holding the race at IRP. It’s a great short track. They can’t abandon Indy, it’s one of NASCAR’s top markets for TV viewership.
One other thing. I turned it off before the finish yesterday, not because of the rumble strip issue. The driver of the #15 car that drove around half the track leaking oil everywhere caused a 30 minute delay to lay down and clean up oil dry. That’s the kind of issue that NASCAR seems to have all too often. How hard is it to get your car off the track NOW, when you’re laying down oil????

I hate Indy. Never watch. I wouldn’t walk across the street to see a trace there. There are plenty of great tracks for NASCAR. Leave Indy for Indy cars. Racing stock cars at Indy makes about as much sense as racing Indy cars at Daytona.

They tried it and a driver died. Rathmann won. Amick died.

I would watch the heck outta that though!

Why not go back to the beginning, let them race what they brung!! What I’m saying is, pretty much how it is, could you imagine Nascar trying to race on the Original brick yard?? No , because they want to race on a smooth track! No talent involved in just your usual as slackers,!!