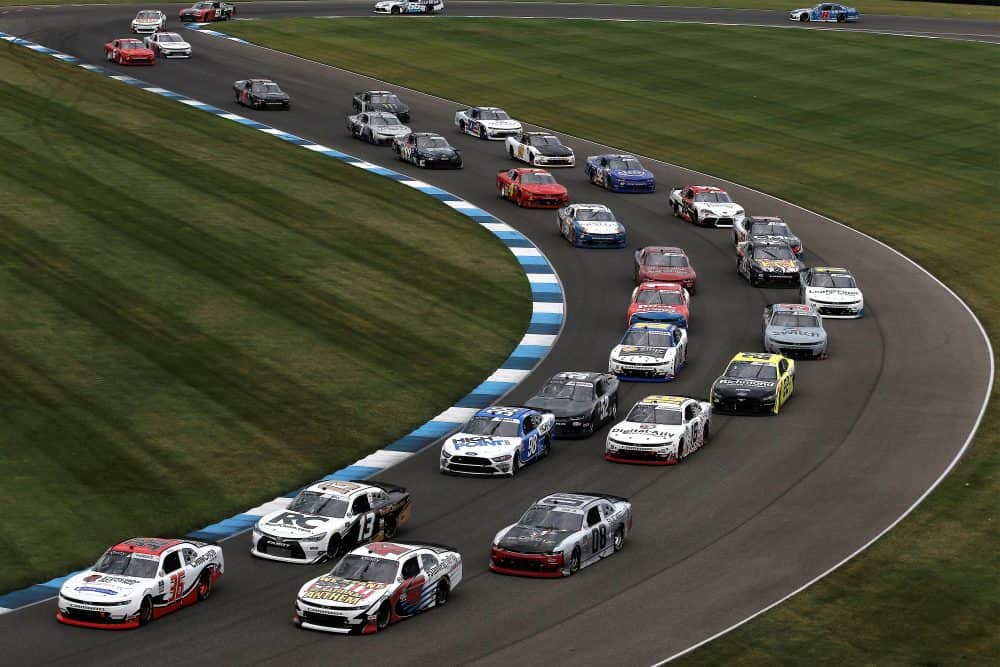 As a wide-eyed kid in love with NASCAR, I still remember the excitement, the hype surrounding the first ever Brickyard 400 at Indianapolis Motor Speedway in 1994. For the first time in 83 years, stock cars were running on the shrine of open-wheel racing and 350,000 screaming fans were there in person to see it. There’s a reason they call the Indianapolis 500 the Greatest Spectacle in Racing. It’s a big freaking deal to partner with that tradition and NASCAR reaped the rewards almost instantly. Inaugural winner Jeff Gordon was launched into national superstardom the second he waltzed into victory lane.

As a professional, I’ll never forget my first Brickyard 400 in person at 2006. Every minute I spent there had the look and feel of a top-shelf, crown jewel event. Some 50 cars showed up to make the field for a race in which the last-place car still made well over $150,000. Jeff Burton won the pole but Jimmie Johnson ultimately prevailed in one of the more competitive NASCAR races on the oval. 280,000 fans were there to see it, just 15 years ago with traffic so insane around the racetrack our TV crew needed a police escort to get out and make our flights.

That’s what makes the NASCAR Indy experience in 2021 so heartbreaking to watch. This racetrack is special and its stock car relationship was created to be a highlight of the year, a heavyweight fight between the best teams and drivers. Instead, it’s suffering through a highlight reel of mistakes — again — putting stock car racing in the spotlight for all the wrong reasons.

Moving this race to the track’s 2.4-mile, 14-turn road course this year was supposed to restart tradition. For 70-some laps, they were well on their way although 13 lead changes isn’t exactly Hall of Fame worthy. Until a fateful debris caution with less than 10 laps remaining, the storyline was Kyle Larson waltzing to another four-second victory over the field.

But a faulty curb, installed in turn 6 to slow NASCAR drivers down on the course, had other ideas. On a restart with six laps remaining, Martin Truex Jr. spun and, as he did so, pieces of the curb came apart. You could see it on television and it was clear debris was strewn all over the racetrack. It was the same type of junk that caused the yellow to be thrown just moments earlier.

NASCAR stayed green. And, as you might expect, all hell broke loose one minute later when the entire field came back around to run over chunks of curbing. The mess of cars tearing themselves into pieces was an eerie reminder of the Kyle Busch wreck into a raging downpour at New Hampshire Motor Speedway less than a month ago.

You telling me a curb did this? pic.twitter.com/dgsn1iad2g

In the aftermath, NASCAR officials were lucky no one was seriously hurt. Joey Logano’s smash into the tire barrier was hard to watch, left without the minute-plus reaction time officials had to make a call on this curb.

“Next thing I knew, I was airborne and headed to the wall,” Logano said. “I had a lot of time to think about it. I was just along for the ride as a passenger knowing what the end result was going to be.”

It’s another black eye for the sport’s officiating, a topic Jeff Gluck of The Athletic tackles well in his weekly column. I agree with the premise that super obviously bad calls, ones that border on the absurd give the sport a bad look. Fans who thrive on the chaos are likely outnumbered by those who’d rather have this type of entertainment announced for them in advance (think: WWE) then sold to them as competitive sport.

Which brings us to the other part of Logano’s post-race comments.

“All the fans were cheering right there,” he said about his exit from a totaled racecar. “They were happy to see me get out, which was good to see.”

It was notable the 2018 Cup champ, whose owner Roger Penske now owns the speedway, put lipstick on a pig by referencing a fan base seemingly eager to check out this new NASCAR experiment.

The debate rages on as to whether the event should have been moved from the oval after 26 years, but all accounts from the ground were that the long, slow decline in attendance had at least been halted by the switch. Track president J. Douglas Boles said ticket sales were up 20% over IndyCar/Xfinity the day before and overall, the crowd ticked upward over 2019. It was clear there was energy surrounding the speedway for a NASCAR race. It’s the first time in awhile you could say that.

Here’s the problem. That crowd turned on the Indy oval after the Great Tire Debacle of 2008. In that event, also won by Johnson, tires couldn’t last more than 10-12 laps before blowing, turning the race into a clown show. Drivers openly admitted they couldn’t run at more than 75% throttle, tiptoeing around with no control as to when, not if, their Goodyears would fall apart.

It was the type of black eye you can’t have in a crown jewel event. Could you imagine if the Super Bowl had to stop every 15 minutes because the field was too torn up for players? If the ice melted in the hockey rink so a Stanley Cup game took five hours to complete? It’s the type of failure that remains imprinted in someone’s mind long after the catastrophe’s complete. It’s the type of disappointment that keeps people from risking their hard-earned money to see it potentially happen again.

The question now is what those fans think. Were the ones at the track OK with an ending that wiped out eight cars, scrambled the running order like throwing fruit in a blender and took nearly 90 minutes to complete? Were fans watching on TV satisfied with a race that wound up dragging so much the finish had to be moved from NBC to NBC Sports Network? Did a miraculous, popular win by AJ Allmendinger do enough to mitigate the damage?

Early signs are #Curbgate will do nothing to deter NASCAR running the road course again in 2022. Penske’s connection to the sport as well as the speedway ensures they’re going to give it a second shot.

“I thought the energy of the fans that came today was unbelievable,” Boles said. “I was so excited this morning to interact with folks. There’s all kinds of positives…. This is one of those events where I think we’ve made the right decision for right now. I think we’ll have it back again on the road course and we’ll have to continue to see where we go.”

“You take a lot of learnings away,” added NASCAR Vice President of Competition Scott Miller. “And can come back and put on a better event, avoiding the problems we had today.”

In the end, the fan base will determine whether that second chance is worth having. Formula 1 lasted two more years after a Michelin tire debacle in 2005 forced a pullout of all but six drivers from the U.S. Grand Prix. But the die was cast.

There’s no more track types for NASCAR to switch to at Indy. Was this moment the one we’ll look back on in five years as the straw that broke the camel’s back?

Does Fog-gate during the NHL final count?

Technically in football play stops every 4-6 seconds depending on the play with a select few being 10-12 seconds.

I think the road course deserves an honest second chance by the fans and the media alike. The track will learn and change what it needs to and keep in mind the drivers and teams are partially to blame as the curbing is designed/intended to not be used by the drivers. The drivers and teams choose to “jump the curbs” in these road course races. It is a chance they are willing to take and it bit several of them this weekend in all 3 series.

It wasn’t anywhere near as bad as 2008, but it still wasn’t a good thing. I always thought that the rumble strips were made of asphalt or concrete (much like a speed bump you encounter in real life), not metal.
Good read Tom.

I didn’t know they were made of metal either. I always assumed some kind of plastic or urethane.

From my perspective, I think we have to look at the majority of the race, which in my opinion, was a vast improvement on what the oval had become after the novelty had worn off. Give both the Speedway, & NASCAR a chance to learn from & eliminate their mistakes. One of the good things that could come of this is that AJ just might have secured himself a full time cup ride next season. Don’t overlook the fact that he’s not only a cup winner. But a 24 Hours of Daytona lead driving winner as well. For all the chaos, it ended on a feel good note. That has to help soften the blow a little.

It deserves another try or two. Things with the curbing can be figured out. Maybe just some free-standing tires barriers located where the turtle Corey LaJoie ramped would work (you pay a price, but a car’s chassis isn’t twisted like a pretzel). Or we paint zones and dish out penalties for exceeding track limits. The race was pretty good up until the end. The celebration of both IndyCar and NASCAR together ended up cooler than I thought. There is more potential to this than I first thought. But, if it fails, an Indy weekend split between the Brickyard and IRP sounds fun.

Speaking of penalties how did the 23 car not get a penalty for short-cutting the track when a bit later the 14 car did? No way should Wallace have gotten to 13th if penalized for off track in the 5-6 turns. Based on finishes of others that we in the back. NASCAR also screwed over the 42 team with a black flag that should have been issued during the beginning or middle of that last caution not as they were getting the one to go.

Exactly right, I was wondering the same thing. But some think he drove great to earn that 13th spot. Heck no, he cheated and Nascar let him.

It was reported that he did get a penalty, a drive thru like they gave Briscoe. I still think penalizing someone who is forced off course (Briscoe) or avoids launching over a curb and causing a wreck (Wallace) and doesn’t gain a position is ridiculous.

This article is exactly how I feel. The 2008 tire debacle was just the beginning of the end for the “mystique” of NASCAR at Indy. The 90 minutes that it took to complete the last 5 laps was insufferable.

I’m still trying to understand why, after running some fifty minutes past the time slot and announcing that the scheduled golf match was playing on the Golf Channel, they suddenly decided to switch the last two laps, TWO LAPS, to MSNBC so that those who were recording it missed the end even though they had added extra time.

Yeah, that sucked. Especially a feel good ending after the late race debacle. My dvr continued to record another 45 minutes, so wasn’t that time allotted for the race anyway?