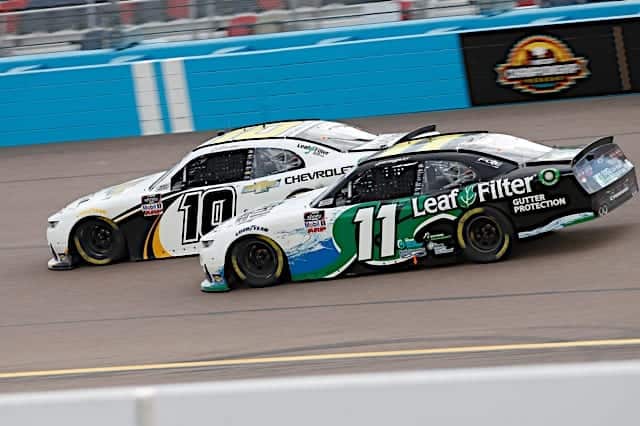 Did You Notice? … Matt Kaulig has had one of the most successful beginnings of any team without a NASCAR Cup Series charter? His No. 16 Chevrolet became the first open car to win a Cup race since the current franchise-based system was created in 2016.

Throughout the year, Kaulig has laid a solid foundation for success as a part-time Cup team. They’ve earned a win, two top-five finishes and four top 10s with multiple drivers. Despite only racing in six of the 24 races so far, they’re ahead of six chartered teams in owner standings. Their average finish of 12.7 is equal to playoff-caliber organizations like Team Penske (Ryan Blaney) while better than Richard Childress Racing (Austin Dillon, Tyler Reddick) and Chip Ganassi Racing’s Kurt Busch.

The numbers get more impressive when you compare Kaulig to the new full-time teams and car owners on the Cup level this year.

We’ve talked about how Trackhouse has overachieved this season, coming within striking distance of a playoff spot. So what can you say about a team like Kaulig running circles around them?

Here’s what this new team did right, a future blueprint for organizations looking to step up to Cup.

1) Patience is a virtue. Kaulig has been around for five-plus years, beginning as a one-car NASCAR Xfinity Series team. The first two seasons, the sponsor was his own company, Leaf Gutter Protection, and the owner learned the hard way how difficult it was to be competitive in this sport.

Full-time driver Blake Koch led a total of 48 laps during that span, never earning a top-five finish with the program. The team finished seventh, then 11th in the standings and was outclassed by the usual suspects: JR Motorsports, Joe Gibbs Racing and Childress.

But the team didn’t panic and it didn’t overspend. They did a slow build of the program, switching to Ryan Truex in 2018 while utilizing outside sponsorship money for the first time. The next year, they took a large step forward by adding a second car part time while pairing up with talented NASCAR Camping World Truck Series prospect Justin Haley. A third car was even utilized in select races with former Cup full-timer AJ Allmendinger.

Finally, results started to come. Ross Chastain won the pack race of Daytona International Speedway while Allmendinger followed up with a win at the Charlotte Motor Speedway ROVAL in October. Haley was the most consistent driver Kaulig employed to date, posting 20 top-10 finishes in 33 starts.

Last season, Kaulig became a two-car team with Allmendinger running a third car part-time. The organization became a true title contender, posting five wins in total with Haley making the Championship 4. They also attempted a Cup race for the first time, Haley making the field and finishing 13th in the 2020 Daytona 500.

It’s a finish that could have encouraged Kaulig to run a larger schedule. Again … they didn’t overdo it. The team waited a whole year to run Cup again, committing to just 10 races with a variety of drivers. They’ll debut full time in 2022 with the Next Gen car, a brand new chassis (again, saving money) and after six seasons of preparation.

2) Play to your strengths. Kaulig didn’t try and run tracks like Michigan International Speedway this weekend, places that cater to both horsepower and experience. Their Cup schedule thus far has consisted of pack races and road courses, both track types that can make them instantly competitive.

The rules surrounding Daytona and Talladega Superspeedway keep all 40 cars in contention so long as you can stay connected to the draft. And on road courses? Kaulig has one of the premier road racers in Allmendinger, allowing them to make up any deficits in horsepower or chassis construction.

You can’t get sponsorship if you’re not successful, right? So why not focus your opportunities on places where your car will stand out?

3) Aim for the right blend of experience and talent. Take a look at Kaulig’s roster the last two seasons. They have Allmendinger, a former Cup driver loose and having fun at this stage of his career. Chastain’s one of the better young talents of his generation who got poached by Chip Ganassi. Haley, at age 22, already has a bizarre Cup victory from a rain-shortened Daytona race under his belt. And Kaz Grala shocked NASCAR with a top-10 finish subbing for Dillon at the Daytona road course last season before hooking up with Kaulig for Cup races.

Those drivers aren’t exactly what you’d call “pay-to-play.” They’re a mix of ages, hungry and talented, a good chemistry blend for a program built up by President Chris Rice. It’s a team that worked through drivers to get to the sweet spot.

And now? They’re reaping the rewards.

This is not just because I’d hate Dinger because of his Substance Abuses, and we’d be eating it up if it was Ryan Truex, but, I’d rather see an Actual Grand Rapids or an Actual Lexington or an Actual Richmond team again more than the Charters.

Uhhh Tom, I think you whiffed. “It feels like we’re heading in the wrong direction once again with the regular season finale heading to the biggest virus hotspot in the country: Florida“. Easy to do. It was in Fla. for many years. Old, long-time habits are hard to break!

We don’t know next season’s lineup as yet. But if it’s anything like this years, it would seem like a waste of a charter not to have AJ in a full time ride. People are talking, & writing like he came totally out of left field for the win. In a way that may be partially true, but he was behind Larson on the final restart, & he’s also won another race for a mid pack team who hasn’t won a race since. Plus being the lead driver, who was put in for the final sprint to the finish in the 24 hours of Daytona bringing it home for the win. With sponsorship being what it is, another win. Or even being in strong contention should be attractive to potential sponsors.