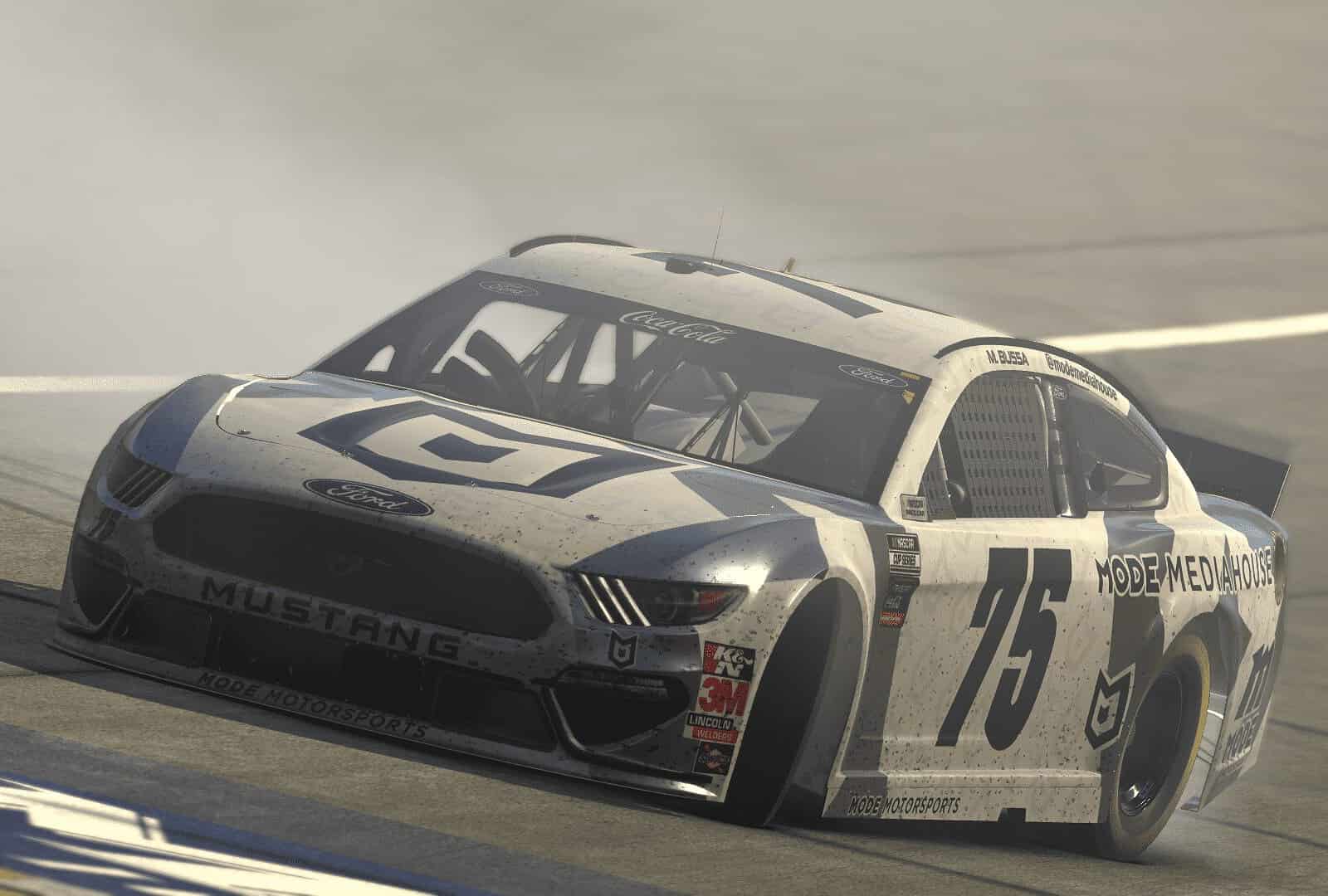 Round 14 of the season at the virtual Michigan International Speedway proved to be a wild for the final regular season race, concluding with Matt Bussa taking home the victory and clinching his spot into the playoffs.

The walk-off win, as many would say, allows Bussa a chance at a championship in 2021 after he flew under the radar most of the year.

“I still can’t believe it,” he said afterward. “I knew going into this race, there was still a slim chance, but pack racing, intensity, there’s no way. […] We were pushing 290 [degrees] but the engine survived—hate the last lap contact for Keegan (Leahy) but we pulled off the win.”

It was Bussa’s first win in the series since Atlanta in 2018. Three years and over 50 starts later, he was victorious again in the eNASCAR Coca-Cola iRacing Series.

The unpredictable season continued Tuesday night (Aug. 17) with crazy racing throughout the field. Michigan is typically a multi-groove racetrack, especially as the race progresses, and Tuesday was no different than most races at the track. There was three-to-four-wide racing for a majority of the night, creating chaos for the entire event.

This race featured one of the wildest last laps ever seen in the series. Keegan Leahy had the lead over Jake Matheson coming out of turn 2, but down the backstretch, Matheson peeked low and turned Leahy, allowing Bussa to squeak by going into turn 3. Bussa never looked back and was the first to the line.

Cautions were not too easy to come by for a good portion of the race, but the biggest incident that occurred was was a big crash involving Garrett Manes, Vicente Salas and others. This came near halfway, changing just about the entire complexion of this race. Even with only a few yellows, it was enough to put racers like Casey Kirwan, Bussa and others who needed to win for their playoff hopes near the front.

Polesitter Logan Clampitt came into the race on the playoff border, needing a good race to make it in. Leading a solid portion of the race helped his cause and in the end, he locked himself into contention for a title for the first time since 2017.

One of the most unfortunate events of the night took place around lap 20. Defending champion Nick Ottinger lost his power due to a storm in his area, something occasionally seen during these races. Because of it, Ottinger will not make the playoffs and there will officially be a new champion this season.

Fuel saving was a big part of the event, as well. Starting as early as lap one, several drivers near the back of the field were beginning to use their fuel-saving methods to hope to make it on one stop if there weren’t any cautions. With the clean and green look, it turned out to work and pay off after the first caution.

Green flag pit stops began for the leaders around lap 34, which definitely put them in a two-stop window. Many of the drivers who were saving at the start were able to run longer than most, which allowed them to get much-needed track position when they caught the caution mid-cycle.

Four-time champion Ray Alfalla drove his heart out. After starting all the way back in 33rd, he drove up to the third position by lap 25. His only goal tonight and only way to make the playoffs was to win. Unfortunately, he did not get the job done after a spin on lap 51, but he went for broke, displayed a stellar drive and he came home eighth.

Some of these races have started tame just as this one did, but as the intensity picks up, the end becomes, what many would say, a wreckfest. Near the front, there were so many different drivers who were in different scenarios, whether they were locked into the playoffs or trying to win their way in.

Late-race restarts always shake up the field, as it did tonight. Jake Nichols won the race off pit road and set himself up for victory with only a seven-lap shootout. Nichols wound up third, but the strategy was good enough to bring home that top five-finish.

Following Bussa in the finishing order was Matheson in second, Nichols in third, Michael Conti in fourth and Zack Novak rounding out the top five.

The first race of the eNASCAR playoffs takes place in two weeks (Aug. 31) at the virtual Darlington Raceway. Coverage begins at 9 p.m. ET on eNASCAR.com and Twitch.tv/iRacing.