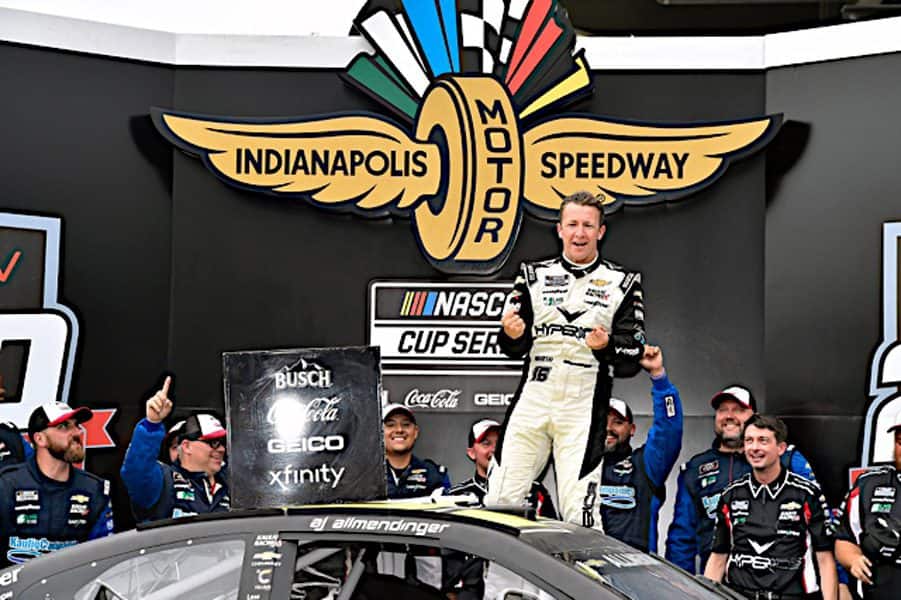 The Indy Road Course ratings were down from the Brickyard 400, and the ending wasn’t a great look for NASCAR. What does the future look like at that venue for the series? – Griffin P., Indianapolis, Ind.

Talk about a loaded question … but one that’s topical.

Per Adam Stern, last year’s Brickyard 400 on the oval had over four million viewers while this weekend’s Verizon 200 at The Brickyard had just shy of two million.

➖ This year's race, which started hours earlier than 2020 Brickyard 400, was still the highest-rated sport event of the weekend. pic.twitter.com/wmJKJls9bu

Some of that can be attributed to the earlier start time (1 p.m. ET) and some can be attributed to a large portion of the fanbase’s dismay for racing on the Indianapolis Motor Speedway road course instead of the oval. But most people would probably agree that up until the curb wreaked havoc, the race itself really wasn’t that bad.

You know what's crazy too? Up until the wreck and curbing issue that started the whole mess, this race really wasn't that bad at all.

I'll even say it was… *wait for it* good! Just a shame the ending has been the way it is. Was a fine day and race before it went haywire.

Conventional wisdom suggests the race will return to the road course next season after some much-needed improvements to the curbing in turns 5-6. IMS track president Doug Boles and NASCAR’s Scott Miller have suggested as much moving forward, and Joey Logano wants to get rid of the turn(s) entirely.

But to answer your question, Griffin, the future looks like what we saw Sunday (Aug. 15): racing on the road course. NASCAR has shown the direction they’re going in the future is turning right and left, the Next Gen car has been built with road/street courses in mind and with as historic of a place as IMS is, the premier North American motorsports series can’t afford to not go there.

It’s everybody’s dream to go back to IRP (Lucas Oil Raceway) or perhaps run a doubleheader on the IMS oval and the road course, with the latter being entirely more plausible. But Saturday races don’t do as well as Sunday late afternoon, so the concept of doubleheaders may not come to fruition as often as it could (keep it, Pocono Raceway, it works). Plus, the logistical hurdles to overcome with transforming the venue from a road course back to the oval may take more than just a few hours, making the situation less plausible.

Whether you liked what you saw (before the curb chaos) at the road course or you’re an oval supporter through and through, I’d get ready for a lot more of road course brick kissing.

Is AJ Allmendinger‘s win a sign of things to come for Kaulig Racing next year? – Chris C., Annapolis, Md.

Don’t get me wrong: Kaulig Racing will be here for years to come, probably win races and championships and cement themselves as a staple organization in the NASCAR Cup Series.

But to say next year will be a playoff-type season for the current part-time outfit is a bit ambitious. On one hand, the Next Gen car (and Kaulig’s close connection with Richard Childress Racing, which has been leading the development of the Next Gen car) could give them an upper hand.

Their full-time driver Justin Haley is clearly Cup ready after a few years in the NASCAR Xfinity Series (heck, he’s already a Cup winner), and their other car will have Indy RC winner Allmendinger at the controls on a part-time basis. He just proved he can win and run with the best of the best on specific track types.

On the other hand, though, Haley’s win was, well, lucky, Allmendinger won’t be in the car full-time next year and going from a partial schedule to a full-time outfit is no easy task. There’s a reason why most teams don’t win as early as Kaulig did (second-quickest team to do so in NASCAR history).

To say wins, be it on ovals or road courses, for a team in their first year of full-time existence will be the norm is a stretch. While Kaulig may contend for a playoff spot and score some top-10 finishes here and there, Haley, along with the team, will take their lumps more times than not in 2022.

RE: “…return to the road course next season after some much-needed improvements to the curbing in turns 5-6.”

They better look to improve every turn where the same curbing exists and even review areas where there wasn’t a problem. That’s the one time they get to plead ignorance and get away with it.

I only see 2 solutions;

1) Where curbing is to be installed, grind the track down in a manner that the leading edge of the curbing sits flush or slightly lower than the track surface to eliminate the possibility of any part of the car damaging the curbing edge and wedging up underneath it, or

2) NASCAR has to mandate a minimum height requirement that will not allow the front splitter to come within an inch or two of the pavement at any time. Again, this would prevent the splitter from contacting the leading edge of the curbing and damaging / wedging underneath it.

Now the turtles… I think those should be removed and another solution to marking / enforcing “out of bounds” should be found. Whether that is some kind of paint/compound that reduces grip on that part of the track, tire barriers as someone else mentioned on another article, or something else. The speed bumps/parking blocks inflict too much damage, even potentially impacting cars who stay in bounds due to an out of control “offender”. There has to be better alternatives.

Use rumble strips that rattle the drivers’ teeth as well as his cage if they get off the pavement.

Or use spikes instead of curbing to make it really interesting.

I’m not sure I’d be up for that but I like the way you are thinking.

I’m thinking a moat with some crocs

nascar is hardly the only pro racing series that has a problem with drivers using more than just the track boundaries to maintain speed through the corners.
F1 for example has had this problem for several years and has been using kerbs since before that. This year they have been, during qualifying disallowing track times if drivers exceed the track limits. (Track limits are laid down before the race, and doesnt mean they cant go over the kerbs.)
Buut they arent changing the cars, rather putting the emphasis on the drivers which is where it belongs.

One of the reasons for the lower ratings is the 1 pm start? From the posting here you would have thought that a 1 PM start was everyone’s dream.
Also I dont believe that all this comparing ratings from this years race to last years when it was weeks earlier or later is valid.
I believe that come Sunday, or Saturday, you either watch the race or you dont. It doesnt really matter what track they are at. To think otherwise is just another excuse for the declining popularity of the sport. I will accept that the network it is being shown on does make a difference.

Also, perhaps the previous races at Indy have discouraged anyone from wanting to dedicate an entire afternoon watching a parade around a track never made for stock cars?

Keep the road course! By far the best/most entertaining race since 1995. If they insist on running at the Speedway instead of IRP, then forget the oval. I still can’t figure out why anyone would want to buy a ticket to see a race at a track where the majority of the track is blocked from view no matter where you sit.

If the race was to be held on the oval, I wouldn’t have even turned on the TV. In addition to a better solution for the curbs, I think the track should be a little wider, especially turn one since the field is so bunched up on restarts.

Kevin in SoCal
Reply to  Ron

For sure, there looks like an alternate turn 1 area with a less-sharp curve that can be used instead.

NA$CAR wants the double file starts and restarts to funnel into as narrow a corner as possible to increase the carnage. It’s the same reason they use chicanes.