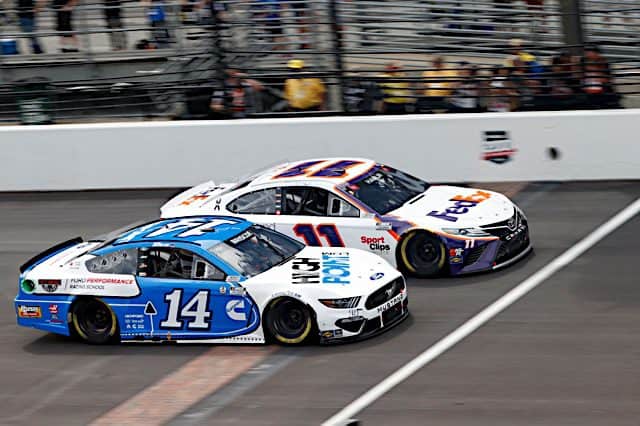 Days after the inaugural NASCAR Cup Series race on the Indianapolis Motor Speedway road course, Denny Hamlin and Chase Briscoe continue to debate what happened on the final restart of the race.

But what really happened that led Briscoe to spin Hamlin with a lap and a half remaining? Why are any questions still lingering?

Well, it’s all a matter of timing.

Let’s start with the black-and-white basics of what took place Sunday afternoon (Aug. 15).

On the second and final overtime restart of the Verizon 200 at the Brickyard, Briscoe’s No. 14 Ford was to the left of Hamlin’s FedEx Toyota entering the 90-degree right-handed turn 1. Hamlin exited wide and forced Briscoe into the grass, but Briscoe then cut hard left to continue off-roading and completely cut turn 2.

Briscoe rejoined the track on the next straightaway alongside Hamlin and allowed the No. 11 through to the lead. NASCAR then issued a stop-and-go penalty to Briscoe, which the rookie was supposed to serve in turn 10 but did not.

In the midst of that, Briscoe spun Hamlin in between turns 9 and 10, eliminating Hamlin’s chances to win his first race of the season and first of any sort at Indy.

Briscoe then served a stop-and-go at turn 12 but was also issued a pass-through penalty and ordered to pit road. Briscoe came to pit road, stopped in his stall and was effectively parked by NASCAR for the race’s conclusion.

With all that out of the way, let’s dive into the nuanced minutia of how this devolved into a he-said, he-said battle to determine who was told what when and why such events took place.

The first question that’s been hotly discussed is when Briscoe was informed of the penalty.

Watching live from afar like most everyone was, how Briscoe could be unaware that cutting an entire corner and exiting side-by-side with the leader would result in a penalty remains questionable at best. But for argument’s sake, let’s say he was legitimately unknowing that a penalty would be issued his way.

Once NASCAR relays the message over the radio that the No. 14 is under penalty, it’s up to his team to make sure the driver knows as soon as possible. However, the spotters still have to confirm with the crew chief whether that message should be delivered. With as quickly as everything unfolded, there’s reason to understand why that messaging would be delayed.

Soooo the 14 didn’t know but yet acknowledged it on the radio? Ok, gotcha, noted. https://t.co/XEsuIeCkCF

No we don’t. However they said they played this in order of transmission. I was told not to worry about the 14 in turn 7.

@dennyhamlin That was my crew chiefs voice, anyone that listens to us weekly knows that’s not my voice plus I never use the word “copy” I always say 10-4. Feel free to call or text me if you don’t wanna go back and forth on here. https://t.co/rRjh6Hacwn

While questions hang around the timing of FOX Sports’ “Radioactive” segment that has since been deleted from the network’s NASCAR Twitter handle, NBC Sports Network aired what seemed to be live communication during its “Motor Mouths” show on Peacock Monday night.

The late-race tangle between Chase Briscoe and Denny Hamlin had everyone talking.@steveletarte, @jeffburton, and @kylepetty discuss the radio communication between NASCAR and the No. 14 team on @peacocktv. #MotorMouths #NASCAR pic.twitter.com/vHrqs7TG7h

But does any of that really matter?

The truth is this: Regardless of penalty, Chase Briscoe dumped Denny Hamlin. Briscoe got back to the gas exiting turn 9 sooner than Hamlin and never relented on the straightaway, eventually turning Hamlin to the left, sideways and backward ahead of the sharp right-hand corner.

Sure, we can go back to when Briscoe was informed of the penalty – was he told before, after or while he turned Hamlin around? – and whether Briscoe intended to spin Hamlin. But the end result displayed some terrible optics.

Briscoe’s driving record across NASCAR’s three national series implies he’s a clean racer who drives hard but respectfully. That history is the only piece of the equation that allows any benefit of the doubt in Briscoe’s favor.

A frequent contributor on the NASCAR subreddit, Briscoe claimed there was zero intent behind the contact on a thread Monday night.

“My dad would still rip me a new one if I ever wrecked someone on purpose, that’s just not how I was raised,” Briscoe wrote. “I would consider an asterisk beside the win if I did it by wrecking someone, I want to win straight up fair and square. I had absolutely zero reason to try to wreck him. I knew before we restarted that I was probably getting ran wide because that’s just how it is getting into [turn] 1 there especially at the end of the race. Denny was racing me hard for a win, which is what he is paid to do, I was racing as hard as I could which is what I’m paid to do. That’s racing and that’s what I signed up for, and you’ll never hear me complain about a guy racing me hard because that’s what we’re supposed to be doing.”

Briscoe just watched his Stewart-Haas Racing teammate Aric Almirola win at New Hampshire Motor Speedway one month ago to launch himself into the playoffs. Perhaps Briscoe meant only to nudge Hamlin out of the way rather than straight dumping him coming to the white flag – while, mind you, being penalized and an irrelevant factor for the win by then.

Context for all of these things is important. Would Briscoe have been willing to continue forcing the issue had he known he was penalized and out of the running? Why wasn’t Briscoe’s penalty communicated sooner to the driver? Should Hamlin have let Briscoe go ahead knowing the No. 14 was ineligible for the victory?

Another observation: Hamlin deserves plenty of credit for being willing to hear Briscoe’s side of it rather than walking up to him and swinging immediately. I don’t encourage that violence by any means, but I think I would have understood if Hamlin decided to be less cordial under the circumstances.

The entire situation played out very quickly, and radio timestamps and channels make discerning blame and timelines that much more complex.

But as Hamlin assessed following his pit-road discussion with Briscoe, it boils down to “a lack of situational awareness” on Briscoe’s behalf.

The other truth here is this newborn “rivalry,” as some deem it, is almost sure to be short-lived. Briscoe seems far too respectful a racer and Hamlin more mature than ever to continue holding grudges. But Hamlin may not be as lenient if there is indeed a next time that Briscoe takes him out of contention for a win.

Perhaps this entire situation will be just be one publicized learning experience for Briscoe, taking away the lesson of just being more aware of his surroundings.

Two races remain in his first regular season in Cup. Making enemies with the guy who has a chance to be the regular season championship seems unwise.

hamlin should be “dumped” from racing.

Poor Denny. He doesn’t like being raced hard. Made my day when Briscoe turned him. I hope Denny doesn’t win a race all season.

Hamlin took away any chance Briscoe had of winning his first race by driving him dirty, Briscoe just returned the favor, Denny got just what he deserved, Drive like a A-hole then you get treated like one denny

How soon Denny forgets dumping Chase Elliott at Bristol. guess he believes in the ‘Rules for thee but not for me’ attitude?

He’s another “Do as I say not as I do” kind of driver.

Denny couldn’t say much since he had just sent Briscoe out into the grass. And I believe he knew he couldn’t push the issue too much after the race because of that.

Watching the helicopter view of turn one, you can see no contact was made between Hamlin and Briscoe. Instead of Briscoe falling in behind Hamlin, he turned hard left and cut through the grass. Briscoe wasn’t forced off the track, he took himself off the track. I can’t believe that wasn’t reported. Even Gordon had another version of the incident.

Briscoe took to the grass because Hamlin didn’t leave him any room on the pavement. Which is what everybody expected.