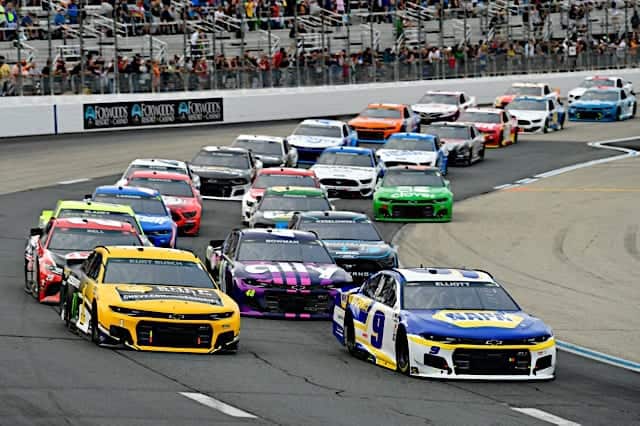 We’re still dealing with this mess?

It was announced Aug. 19 that Corey LaJoie will miss this week’s NASCAR Cup Series race due to COVID-19 protocols.

LaJoie has entered a seven-day quarantine after being in close contact with somebody while recording a podcast (yes, a podcast) on Aug. 16. It should be mentioned that NASCAR’s current COVID-19 protocols call for a seven-day quarantine after exposure only if the individual has not been vaccinated; those who have been vaccinated must only test negative after three-to-five days, with no need to quarantine unless they test positive.

So it would seem that LaJoie has not been vaccinated, reading between the lines on this issue. Josh Berry was announced as the driver of the No. 7 Chevrolet this weekend.

After the announcement, LaJoie went on NASCAR radio and had some … interesting quotes.

Full Corey LaJoie quote: "I'm not going to tell anyone else what their risk aversion should be. I feel plenty healthy, my immune system is capable of fighting off anything. I work out as hard as anybody. I eat healthy. That's kind of where I stand."#NASCAR

More from Corey LaJoie on @SiriusXMNASCAR : "I just don't want somebody who is actually competing for a championship have their whole season go down the drain for something you're not even susceptible to." #NASCAR

So, forget for a second that he did not say these honestly scary things, we’ll get to that in just a second. Instead, let’s look at LaJoie’s apparent decision not to get vaccinated.

If he did choose not to get vaccinated, LaJoie has cost himself (and, by proxy, his team; sponsors care about the driver championship, not so much the owner championship) one of the 26 opportunities he is afforded to win a race and make the playoffs. Sure, it wasn’t a great chance, but a surprise rain-out win is not unheard of in the summer months at a track with no lights like Michigan International Speedway.

And for what? His freedom from taking a vaccine that half of the country has now taken with a severe reaction rate astronomically low? The CDC states that two to five people out of a million have a severe reaction to the vaccine. There is a significantly higher chance of dying driving to a racetrack than there is of being hospitalized due to a COVID vaccine.

Unless he has a legitimate medical reason not to get vaccinated, it is his choice not to be vaccinated, of course. Just like it would be Spire or any other team in the garage’s choice to tell drivers like him that they want people who want to be in the playoffs. They want people who want to be a champion. You can hate the vaccine, think it’s evil, whatever. I hate Kansas Speedway and every driver hates the double-yellow-line rule. But if I were a driver, I would not refuse to race at Kansas or the superspeedways because I would want to actually be a successful driver. And all drivers in the playoffs cannot refuse to race at those tracks.

And this level of just not caring enough about your job, one of the best jobs in the world and something that anybody should feel incredibly grateful to have, to get two jabs in the arm from a little needle is really telling. This guy wrote a letter begging Rick Hendrick for the No. 48 seat last year, and he’s acting like that in August 2021 when it comes to COVID-19?

Know who cares about their job? Helio Castroneves, who just won a fourth Indianapolis 500 in May, a race for which vaccination was a requirement to get into the garage. Nobody in INDYCAR seemed to mind that requirement, and that race, probably the only one of its kind in North America this year, was also the best of the year both critically and commercially. And somehow, there are still people on the NASCAR side hesitant to do the right thing for both themselves and for their team.

As far as after this quarantine period and seeing LaJoie’s remarks, I have seen words like his before. I honestly do hope he does race next Saturday night. I sincerely do.

What does the NASCAR Cup Series playoff picture look like now?

Anyway, there are just two races remaining in the 2021 regular season already.

Thanks to AJ Allmendinger‘s win at the Indianapolis Motor Speedway road course, the three non-locked-in winners (Christopher Bell, Michael McDowell and Aric Almirola) were locked into the playoffs, along with Denny Hamlin. With 14 drivers locked in, just two spots remain. And with two regular season races remaining, those spots could be filled by two new winners.

Kevin Harvick is 67 points ahead of Tyler Reddick for 15th on the playoff grid. A repeat or ineligible winner in Sunday’s race would lock Harvick into the playoffs if he can stay at least 55 points ahead of Reddick. New winners the next two weeks besides himself would kick him out of the playoffs for the first time since 2009.

Reddick is 28 points ahead of teammate Austin Dillon. It’s looking very likely that only one Richard Childress Racing car will be in the playoffs this season, which is a shame with how much of a step forward that organization has taken in 2021.

None of the other 13 drivers can point their way into the playoffs, and will need to win one of these next two races. Keep an eye on Daniel Suarez this weekend; the last time he was in a fast car at Michigan, he finished top five in both races on the year back in 2019.

Will the NASCAR Xfinity Series return to Iowa Speedway?

It was announced Aug. 19 that Roger Penske will be leasing Iowa Speedway in order to promote NTT IndyCar Series races at the track for multiple years.

This is a deal that makes sense for INDYCAR. The reality of the situation is that there are so few viable ovals the series could compete at in North America and it not be extremely dangerous. Iowa just happens to be one of them. So a doubleheader going forward for a series people want to see on ovals is going to be a big positive.

If I were Penske, the next track I would look at doing something with would be the Milwaukee Mile. That’s another functioning oval IndyCar could go on again pretty easily.

Iowa has not had any NASCAR touring series races since the 2020 NXS and Camping World Truck Series races were canceled due to COVID-19. It held an ARCA Menards Series race last month.

It would not be shocking if, eventually, Penske does figure out a way to bring NXS back to that weekend as a lead-in for IndyCar on either NBC or USA Network. The NASCAR-IndyCar doubleheaders have largely been successful ratings wise, with the one last weekend only underperforming due to going head-to-head with NFL preseason football.

I find it sad that so many people who refuse to get the vaccine are doing so based on social media or word of mouth from others on the fringes of mainstream news. I dare any of those people who refuse to get vaccinated to ask the one person they should be asking, their personal physician. Or better yet, the next time you have an ailment go to the same person advising you on the vaccine instead of your physician. See how well that works out.

One of my friends refuses to be vaccinated. He is basing his decision on the issues from the SARS vaccine from the early 2000s. I get that its his choice but my choice is to do my best to reduce my exposure by staying away from unvaccinated people and wearing a mask indoors again (boy I really hate that).

I agree with your statement of consulting your physician to make a reasonable decision.

I agree with the comments of “ask your physician” .At the same time I question why the person that signs his paycheck didn’t insist that he get the vaccination.
Perhaps the next time he inquires about a job someone will remind him of this.

You get it Don S. It is a personal choice. It is about freedom and respect. What happened to “my body, my choice” all the liberals want to holler?

I’m glad Penske is buying Iowa Speedway. Maybe someday we will see a Cup race at this track in the future?

It’s not just him. He is risking every member of his team. And for a guy that is near 30th in points what kind of a message is he sending to his team? Not a good one.