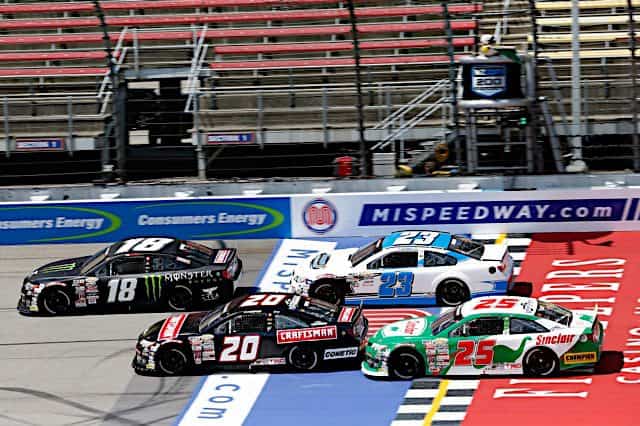 In two days, the ARCA Menards Series drivers will complete a combined 200 laps at two different racetracks. Of those 200 laps, 100 laps will be completed at Michigan International Speedway on Friday (Aug. 20) in the Henry Ford Health Systems 200. Two days later,  the series will travel about 400 miles to the Illinois State Fairgrounds to complete 100 laps in the Allen Crowe 100 on Sunday (Aug. 22).

Of those two races, only five drivers will compete in both: Ty Gibbs, Corey Heim, Brad Smith, D.L. Wilson and Zachary Tinkle. Of those five, only Heim and Gibbs have won, and they also have combined to win all but one ARCA race this season. Their rivalry continues to grow as this season will only have a quarter left – five out of 20 races – after the Allen Crowe 100 on Sunday.

Neither driver has raced at Michigan before, so the half-hour practice session will be critical to their success in the race.

Because the Henry Ford Health Systems 200 will not have qualifying, the starting lineup will be set via owners’ points. As a result, Gibbs and Heim will be on the front row, in first and second, respectively.

“I haven’t been to Michigan before, so it will help to run with ARCA on Friday afternoon before the Xfinity race on Saturday,” Gibbs said in a press release.

In addition to his series-high seven ARCA wins, Gibbs has three NASCAR Xfinity Series wins. He will compete in the Xfinity Series race at Michigan starting from the 10th position.

Before he worries about his Xfinity Series race though, Gibbs must stay focused on his ARCA championship chase. He is only two points ahead of Heim, and the two have traded wins and the points lead this season.

Third and fourth in the point standings are Thad Moffitt and Nick Sanchez, respectively. Both drivers will compete at Michigan but not at the Springfield Mile.

“I’m super excited to get back to Michigan,” Moffitt told Great Lakes Post reporter Casey Campbell. “We’ve made a lot of gains on our intermediate track stuff. I’m really excited to get there. We struggled there last year; we fought tight the entire time. We’ll see with the intermediate track stuff how competitive we are with the No. 18 [Gibbs] and the Venturini cars. We showed a lot of speed at Charlotte [Motor Speedway], we showed a lot of speed at Kansas that we can run in that top three group. I think the No. 18 [Gibbs] is the one to beat so we’ll see how it goes.”

Moffitt unfortunately is shy of funding to run the rest of this season.

NEWS: Thad Moffitt tells me that he only has 3 of the 7 Races sold for the rest of the ARCA Season

Springfield, Milwaukee, Duquoin, and Salem are still not sold

Sanchez relishes the opportunity to race on a track also on the national NASCAR series schedules.

“It’s going to be like a 1.5-mile, but you have a lot more room to race,” Sanchez told Campbell. “It’s going to be a lot less edgy than Charlotte. I’m really looking forward to it. My team and I excel at the bigger tracks. There’s more room for improvement. It’s an important race for me and my development cause it’s a bigger track. If I move up the ranks, I’m going to drive that. Anytime you get to go to one of these bigger tracks, it’s an immense learning experience”

Heim’s Venturini Motorsports teammates at Michigan will be Drew Dollar and Gracie Trotter. Dollar finished fourth at Michigan last year. Currently sixth in the points despite only competing part-time, his experience may be beneficial with the limited practice time at Michigan.

As for Trotter, she too will make her first start at Michigan. She has three straight top 10s in her last three ARCA starts, including a career-best finish of third place at Elko Speedway.

Sam Mayer has struggled since he began his Xfinity Series tenure with JR Motorsports. Although he has two top 10s, he also has three DNFs. Driving for reigning ARCA champ Bret Holmes in his third start with the team, Mayer will also use the ARCA race to gain experience at Michigan before the Xfinity Series race.

While there is not qualifying, history says the winning driver will be starting in the top 10. Only five times in the 39 ARCA races at Michigan thus far has the winner started outside the top 10.

Two days later, 16 ARCA drivers will compete on the 1-mile Springfield Mile dirt track. Gibbs and Heim both have experience there, albeit with disappointing results last year.

Heim earned a DNF in eighth place after his involvement in a late-race accident in 2020. Gibbs on the other hand started first but was involved in an opening-lap caution which cost him several laps. Ultimately, he finished 10 laps down in 10th place.

The Gibbs and Heim duo have largely dominated all races this season, but two drivers specifically could thwart the teenagers’ goal of winning the Allen Crowe 100.

In the lone ARCA dirt race last year, Ryan Unzicker absolutely dominated the race, leading all but one lap en route to his first career victory. In 20 career ARCA starts, he has 12 top 10s, all at dirt tracks.

Making a cameo in ARCA is Justin Allgaier. Allgaier won the 2008 ARCA championship, and he is back in the No. 16 Chevrolet. Allgaier has seven starts at the Springfield Mile, with a win there in 2006, two top fives and four top 10s.

Driving the No. 46 in place of Moffitt will be Taylor Gray. He finished fourth at Springfield last year, and in search of his first main ARCA series win, the teenager will likely be aggressive to snatch the win.

Landen Lewis will make his ARCA debut in the No. 2 usually driven by Sanchez. Lewis admittedly is not expecting to win, but both 2017 ARCA champion Austin Theriault and his crew chief Mark Rette have high praise for him.

“Landen is an aggressive-but-smart driver who I know can be successful at this level,” Theriault told ARCA Racing. “Despite it being a big step for him, his previous dirt experience combined with the people who have mentored him along the way will allow him to adapt quickly to the opportunity that is before him.”

“I enjoy giving young drivers the chance to showcase their talents,” Rette added. “When Austin Theriault and Ron Hornaday spoke highly of Landen and what he has accomplished at his age, I knew that we needed to put something together to allow him to make his debut with us. We look forward to the opportunity to put Rette Jones Racing in Victory Lane for the second time in 2021.”

Jesse Love and Toni Breidinger will drive the Nos. 15 and 25 Venturini Toyotas, respectively. Love will make his first ARCA start on dirt, but the reigning ARCA Menards Series West champion already has one West win this year.

Breidinger earned her career-best finish of ninth in her last race at Winchester Speedway. She too has a new sponsor aboard her car at the Springfield Mile.

teamed up with my friends over at @FreePeople to drive the #25 FP MOVEMENT @ToyotaRacing Camry this Sunday at Illinois State Fair. along with @triller and @HairClub pic.twitter.com/f5rfUHYCIf

Neither Gibbs nor Heim have experience at Michigan and their dirt results are not spectacular. Both drivers could seriously gain ground on each other in the championship battle. However, if this season has taught us anything, it is that this championship battle is destined to be decided at the season finale at Kansas Speedway.

It’s a sad state when a series like ARCA can only field 16 cars for the Springfield Mile.

Love it Justin’s back. My daughter in Ok knows both him and wife Ashley. When rumor first started I had her confirm
It. Didn’t take her long. Hope there’s more cars this year stopped going in grandstand for 16 or so cars. On a mile? Give me a break.