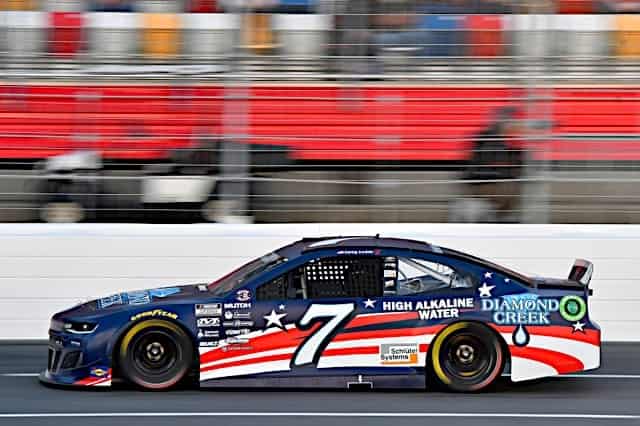 Josh Berry will substitute for LaJoie in the No. 7 Chevrolet on Sunday. Berry is also driving for Michael Annett in Saturday’s Xfinity Series event while Annett recovers from leg surgery.

LaJoie has one top 10 so far this year — a ninth at Daytona International Speedway — and is currently ranked 29th in the point standings. He has four total top 10s in his Cup career.

LaJoie later on Thursday went on SiriusXM NASCAR Radio and detailed what led to him being out this weekend.

LaJoie said one of the people in the studio Monday during the recording of his podcast tested positive for COVID-19 a couple days later.

“Contact tracing, regardless of if I had symptoms or negative tests, it’s an automatic seven-day quarantine which is frustrating. It stinks, it sucks and it stinks. I feel like we had a pretty good car prepared, NationsGuard Camaro, going into this weekend and next with two wildcard races with Michigan and Daytona coming up.

“It’s the kind of world we live in. Do I agree with it all the time? Probably not, but I feel like NASCAR from start to finish were the first professional sport to get back on the race track. We all know how it went last year, how NASCAR continues to navigate this topic of COVID. I’m not a scientist, I’m not a politician, I’m a racecar driver. I was in unfortunate circumstances and I don’t get to do my job this weekend…

“Do I agree with, or I wish I had the opportunity to prove that I’m not carrying, I’m not transmitting or whatever but I don’t even get the opportunity to do that. For what we’re working with, that’s what really has me irritated, I want to be behind the wheel of that (No.) 7 car regardless. But on the other hand, I know NASCAR is doing what it’s got to do and they don’t show bias.”

“I’m not going to tell anyone else what their risk aversion should be,” LaJoie continued. “I feel plenty healthy, my immune system is capable of fighting off anything. I work out as hard as anybody. I eat healthy. That’s kind of where I stand.”

“I don’t want to be the guinea pig or the example by no means, but I do think people could probably learn from this particular circumstance and be a little more cautious.”

Berry filled in for Justin Haley earlier this season at Dover International Speedway when Haley was out because of COVID-19 protocols.

The Tennessee native has had a busy week, as JR Motorsports announced he would pilot the No. 8 full time in 2022. Tire Pros and Harrison’s has signed on as sponsors for the season.

Next season Spire plans for LaJoie to run full time, though it sold two teams to Kaulig Racing. Haley is set to compete for Kaulig in one entry, while AJ Allmendinger runs a part-time slate.

The Cup Series race at Michigan airs on Aug. 22 at 3 p.m. ET on NBC Sports Network.

NASCAR policy for close contact and not vaccinated is quarantine at least 7 days and then can come back if negative test and no symptoms. If vaccinated, no quarantine but must get tested 3-5 days after exposure. Same as CDC guidelines.