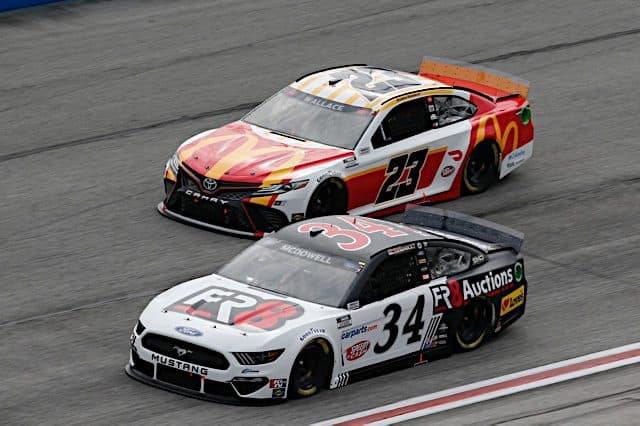 It’s mid-August and Michael McDowell doesn’t yet know his plans for the 2022 NASCAR Cup Series season.

But that’s typical for McDowell.

Every season he’s competed in the Cup Series, including his time with Front Row Motorsports which began in 2018,  McDowell has been on a year-to-year deal.

But in previous years, McDowell wasn’t the defending winner of the Daytona 500 with a career-best six top-10 finishes. While he’s currently 19th in points, he’s locked into the playoffs for the first time in his career.

“Obviously, winning the (Daytona 500) has been awesome,” McDowell said prior to Sunday’s (Aug. 15) Cup race in Indianapolis. “But … I’m still here, heading into September, wondering if I have a job after winning the biggest race in our sport.”

What prompted this exchange on McDowell’s status for the 2022 season?

The latest silly season garage buzz, which this time centers around the possibility that 23XI Racing, in its effort to expand to two teams, may buy or merge with Front Row Motorsports.

This isn’t some Reddit/Twitter rumor run amok. It was asked of Denny Hamlin himself by Fox Sports’ Bob Pockrass Saturday afternoon following Cup practice. If Pockrass is asking about it, there’s some merit to it.

And in a post “Trackhouse Racing buying Chip Ganassi Racing” world, buying a team outright instead of a singular charter at the reported cost of $10 million is not entirely crazy. 23XI would possess three charters, giving it the ability to lease one to another team, like the incoming GMS Racing.

“I don’t have any deals with anyone right now,” was Hamlin’s initial response when asked about it by Pockrass. “We’re still working through it. It’s week-to-week to be honest with you.”

Is he confident the team will be able to secure a charter?

“If we do, if we don’t, you know, we’ll see,” Hamlin said. “Just depends on what opportunity comes in front of us. It’s expensive to run one, much less two and three (cars). We’re still waiting to see what the model’s like to see how invested we’re really going to get in the sport.”

As The Athletic reported earlier in May, Kurt Busch is 23XI Racing’s top prospect should it expand to two teams. At Watkins Glen on Aug. 8, Busch said his deal for 2022 was “so close to being done,” that it was just a matter of Monster Energy setting dates for a “proper announcement.” When I asked Busch about it on Sunday, he didn’t have an update.

With so much in motion, is McDowell nervous at all about his prospects for 2022?

“I’m used to (being year-to-year, but) that doesn’t mean that you’re not nervous,” McDowell said. “Obviously, I’m having the best season I’ve ever had with winning and running up front and consistently running as good as we ever had, if not better. I do feel like I want to be in the series. I’ve been waiting for (the Next Gen) car for a long time. This new car is something that’s going to fit my style, my background (in) sports car racing and feel like it kind of levels the playing field. So I hope that everything works out where I’ll be able to run next year and showcase what we can do as a team.”

By the end of the race weekend in Indianapolis, another “can of worms” was opened about the 2022 season, according to Kaulig Racing president Chris Rice.

That can was opened by AJ Allmendinger and his team owner, Matt Kaulig.

In case you’ve forgotten, the 39-year-old Allmendinger captured his second career Cup Series win Sunday in a part-time effort for the team.

While Kaulig competes full-time in the Xfinity Series, it will make the jump to full-time competition Cup in 2022. Justin Haley has already been announced as running full-time for the team in Cup, with Allmendinger set to be part-time in the team’s second full-time car.

But Allmendinger wouldn’t say no a full-time Cup return following his departure from JTG Daugherty Racing after the 2018 season.

“I will do whatever they want me to do,” Allmendinger said. “I’ve told them that from day one. Whatever they feel like I can help raise the organization and help push it, I’ll do that, whatever that may be. Whatever program we’re on, I’m enjoying it.”

Said Matt Kaulig, “We’re working on it, and he does say that, and he has said that, and he truly will. We’d have to make sure whatever the situation is – we would like to run two full-time Cup cars next year, and we’re working out the details as far as drivers and sponsors and just how all of that looks.”

But if there’s one thing you likely won’t see Allmendinger compete in, it’s in a repeat appearance in the Indianapolis 500.

Allmendinger made his only attempt at the race in 2013 driving for Team Penske, leading 23 laps and finishing seventh.

“What stood out to me (about) 2013, like walking through Gasoline Alley for the Indy 500 and I had Roger Penske next to me; he was going to call my race,” Allmendinger recalled.

“Like that moment will always stand out to me as like an out-of-body (experience) – I was watching myself walk with Roger, and it was so special to me.

“The way the race played out was crazy, and I remember leading, taking the lead, and in the car I kind of lost my mind, and almost like, ‘Oh, my God, I’m leading the Indy 500.’ There was still 130 to go. I had to calm down. But all of a sudden, I go, ‘Okay, now I get it; this is what it means here with the packed house and running the Indy 500 for Roger Penske.’

“That memory will always be special in my mind.

“Part of the reason why people ask me if I’ll ever run the Indy 500 again, part of the reason (I won’t) is I don’t ever want to mess that memory up. It’s true because it was so special to me.”

I hope McDowell can stay in cup and in a more competitive car. I think he would be a threat to run in the top 10 more often. Same goes for Matt D.