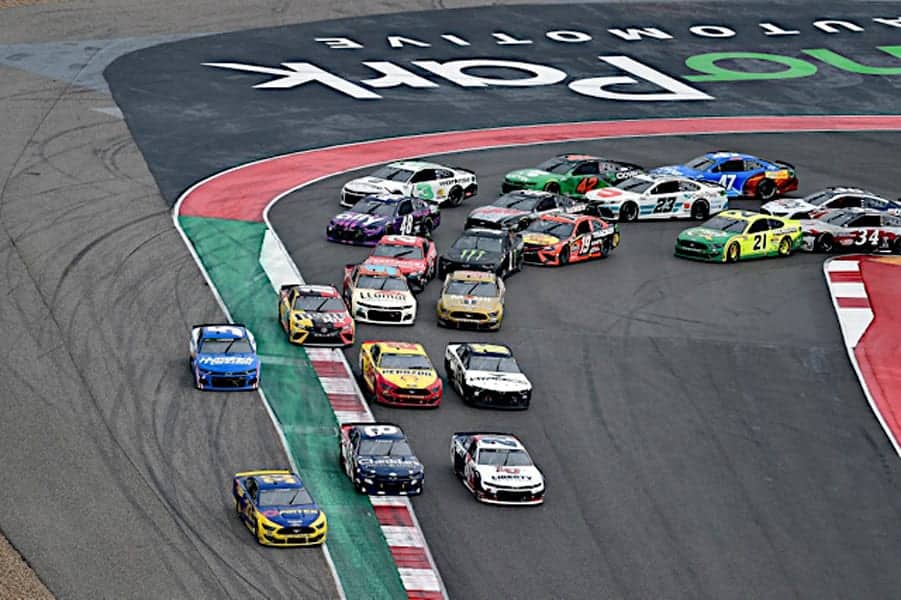 Dale Earnhardt Jr. hinted that JR Motorsports could expand to five NASCAR Xfinity Series cars next year. What is the ideal driver lineup for JRM in 2022?

Josh Roller: If JR Motorsports expands to a five-car team next season, I don’t mind keeping the current driver lineup. Keep Michael Annett in the No. 1. He is solid and consistent and has improved the past two seasons over his first couple with JRM. Justin Allgaier has to stay in the No. 7; that one is self explanatory. Josh Berry is going to the No. 8. If Noah Gragson isn’t going to the NASCAR Cup Series, he should stay in the No. 9, because he has a lot of potential and not enough luck this season. Sam Mayer can take the fifth car, whichj should be numbered anything but No. 88. Dale Earnhardt Jr. should drive the No. 88 in his one-off race. Maybe Earnhardt should try to get the No. 15 from JD Motorsports with Gary Keller and have another Dale Earnhardt, Inc. nod within JRM.

Luken Glover: It was certainly great to see Berry finally earn a shot to go for a championship in one of NASCAR’s top three series. We will also see what Mayer can do with a full-time opportunity. While Annett brings a lot of sponsor support in Pilot/Flying J, it’s time both parties went their separate ways. That could possibly open the door for Sheldon Creed to earn a ride, as he has not shied away from expressing that he doesn’t want to be in the Camping World Truck Series next year. Allgaier is not going anywhere and should compete for a title once again next season. The big puzzle piece in all of this is what happens with Gragson. Things seemed to be on track for him to earn a Cup ride in 2022. But with the sale of Chip Ganassi Racing and the inconsistent, currently winless year Gragson had endured thus far, that looks unlikely. He’s got strong enough funding and the potential to win a lot of races that will likely keep him in the No. 9 car one more year.

Joy Tomlinson: Well, we know Berry and Mayer are locked in for 2022. Allgaier was in the Championship 4 last year and shouldn’t move to any other team. Someone like Creed or Zane Smith should join the fold, as both drivers have won in the Truck Series (the former winning the championship last season). Annett does fine, but Creed or Smith would have a better chance of winning races. Gragson won three of the four Dash 4 Cash prizes and nearly won at Homestead-Miami Speedway before crashing into David Starr, so I don’t think he’ll leave JRM next year. He also has funding. If Creed can bring the same kind of funding Annett does, he should join the organization in 2022.

There is talk that Kyle Larson may attempt to race in the Indianapolis 500 next year. Which organization would you like to see him paired with if he chases the Borg-Warner trophy?

Glover: Ed Carpenter Racing would seem like a good fit for Kyle Larson. It puts Larson in a Chevrolet ride with an opportunity to just go race. Watching Larson in an Indy car would be compelling given his quick ability to learn a new car. It would likely be a competitive car under Larson, and we’ve seen what he can do with various types of equipment.

Roller: It will have to be a Chevrolet team, so the options are Team Penske, Arrow McLaren SP or ECR. It would be cool to have a car prepared by one of these organizations with Hendrick Motorsports being the team listed on the entry list. Penske or McLaren would be the better options for Larson in an attempt at the Indy 500 victory, whether Rick Hendrick puts his name on the car or not.

Tomlinson: Why does it have to be a Chevy team? Jimmie Johnson drove Chevys for years with Hendrick before moving to a Honda this year with CGR. That said, Andretti Autosport or ECR would be good fits for Larson. Both teams added a car for the Indy 500 in 2021 and both showed speed in qualifying. ECR has historically been good in the event, while Andretti could use a good result as its highest finisher in 2021 was Colton Herta in 16th. Larson’s former CGR teammate Kurt Busch ran the 2014 Indy 500 for Andretti, so it would make sense for Larson to join the organization in his own stint.

How much extra testing (if any at all) should NASCAR allow teams to test when a new or reconfigured track is added to the schedule?

Roller: There needs to be more than a one-hour practice session the weekend of the race, that’s for sure. I’m not the biggest believer in solely relying on simulation. While it can be a great tool, it can’t be known how exactly a car, track and tire will mesh until a physical test is performed. So I’m all for having a two-day test at a track where half the field goes one day and the other half the next. This also gives Goodyear the opportunity to test different compounds of tire to see where they need to be for the race. A test beforehand also gives the track and NASCAR an opportunity to see if any changes need or can be made before the race.

Tomlinson: There should be one test allowed for each team on new or reconfigured racetracks. One hour of practice is not enough for teams to get acclimated to new courses, and simulation doesn’t feel the same as being in the car itself. It would help not just the teams but also Goodyear and NASCAR to evaluate the track surface and tires at these new courses. Look at what happened in the rain at Circuit of the Americas; the water that sprays off the back of the cars was so big that no driver could see in front of them. There were periods of rain throughout the weekend, and NASCAR should have considered all the possible scenarios during the practices and qualifying, so it could learn what needs to be done in advance of the Cup race. Perhaps NASCAR could have tests in both wet and dry conditions on the same course and compare the changes between them.

Glover: At least one test for each new track would be beneficial. It allows Goodyear to get the tire right and opens the door for NASCAR to see what changes may need to be done. Simulators have advanced significantly, but it can only allow you to get the real feel so far. The tests NASCAR used to hold were informative and prevented a lot of the issues that occur without proper testing.

The Truck playoffs start this weekend at World Wide Technology Raceway at Gateway. Who is your championship favorite heading into these final seven races?

Tomlinson: My first thought was John Hunter Nemechek, but Austin Hill has the momentum coming in with back-to-back victories. Hill would certainly be a contender at Las Vegas Motor Speedway, where he’s earned two wins, four top fives and five top 10s in seven starts. He hasn’t been as good at the other events, especially Phoenix Raceway, as he has no top 10s there in four races. However, every year is different in the Truck Series, and you never know who will come out on top when the checkered flag flies. Creed is also a possibility as the defending champion.

Glover: It has to be Nemechek. Five wins in 15 starts with 12 top 10s are championship-caliber numbers. Not too many people could also say that they’ve beaten they’re boss multiple times in the lower series in one season. Nemechek has been displaying potential superstar talent for years and is now in his first true opportunity to do so. He’s proving people wrong who were skeptical of his decision to leave Cup for Trucks and is looking to appeal to more owners for his next step.

Roller: It’s extremely hard not to pick Nemechek. The season has been a bit bumpier since COTA in May, but typically if he suffers no issues during the race, Nemechek is going to finish inside the top five. On average he is finishing two positions better than his competitors. He has simply been fast all season long and his consistency will get him to Phoenix. Picking Nemechek is going to sound like the easy choice for the championship, but he’ll be the one hoisting the championship trophy at the end of the season.

Any time NASCAR goes to any track for the first time, or if a track has been significantly modified since they raced there the last time, there should be a dedicated day of practice open to all teams several weeks before the scheduled race.

BTW, my the first impression of site redesign is negative. You are going to lose a lot of clicks by not showing the number of comments on the article’s header link. The only time I go back into an article is if I see there are additional comments since the last time I looked. I am not apt to go into the article a second time unless I know there is a piece of cheese waiting at the end. Also, the ZEDO popup ads are beyond intolerable. They taint the whole experience of coming to the website. They are obtrusive as hell.

Johnny Cuda
Reply to  Bill B

I agree with Bill on the “number of comments on the article’s header link”. I like check back on the articles when they get additional comments.

Couldn’t agree more about the ZEDO ads. The lack of comments is an irritant but not like the ads.

If they have reconfigured a track, there should be open test dates for the competitors.

Please put the comment information BACK on for the articles. I want to know if people have commented.

The stupid popup ads are a real annoyance, too.

Perhaps its that the teams prefer to save the that they would otherwise be spending on testing.