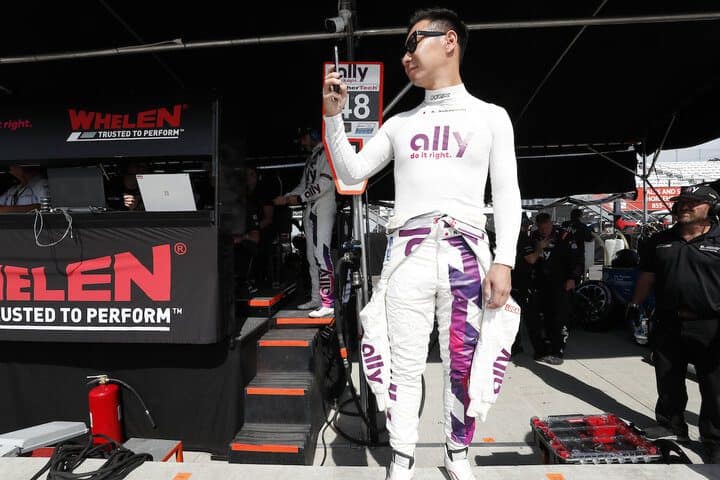 With everyone in the Hypercar class running on low fuel and the softest possible tire compound, times were much quicker than in the first round of qualifying Wednesday.  Kobayashi’s lap was three seconds quicker than his best time on Wednesday.

Kobayashi’s lap was nearly three-tenths of a second faster than teammate Brendon Hartley in the second Toyota, repaired after a crash earlier in the day during Free Practice No. 3.  Signatech Alpine’s Nicolas Lapierre qualified third in the sole Alpine A480-Gibson in the field, but more than 1.6 seconds off of Kobayashi.  Scuderia Cameron Glickenhaus’ Olivier Pla was fourth fastest, followed by teammate Romain Dumas.

With the new Hypercar class brings much slower lap times.  Kobayashi is the all-time lap record holder for the current 8.469-mile configuration of the Circuit de la Sarthe.  That lap from 2017 was more than nine seconds quicker than this year’s pole time.

The qualifying session was interrupted by a red flag less than eight minutes into the session.  Porsche GT Team’s Kevin Estre spun in the Indianapolis turn and impacted the tire barrier.

Estre was ok after the crash, but very disappointed in himself.  In a tweet, he fully took the blame for the crash.

Unlike the Hypercar class, Hyperpole was far more competitive in LMP2.  Prior to the red flag, United Autosports’ Nico Jamin was fastest of those who turned in laps.  After the red, the session became a battle between JOTA Sport’s Antonio Felix da Costa, Team WRT’s Louis Deletraz and G-Drive Racing’s Nyck de Vries.  Da Costa was the first to put up a quick lap, but Deletraz was able to beat it.  De Vries was right there as well.

Deletraz was able to better his time and put himself on top while da Costa was on a quick lap of his own.  That quick lap turned out to be at 146.614 mph, good enough to win the LMP2 pole.

Da Costa’s lap was a full half-second faster than Deletraz.  Panis Racing’s Will Stevens snuck into the conversation in third, while de Vries and Jamin were fourth and fifth.

GTE-Pro saw a surprise of sorts.  Recent years at Le Mans have been dominated by Porsche GT Team.  However, the Porsches were never really in contention Thursday.  Estre was more than likely going to be a threat for pole, but his crash occurred before he could set a representative time.  Even if he were able to drive his car away from the tire barrier, Estre would have been done for the session since you cannot continue in a session after bringing out a red flag.

Meanwhile, Gianmaria Bruni struggled to set a representative time due to track limits.  He did post a time, but it only put him fifth in class.

Vanthoor’s lap was one-sixth of a second faster than Serra’s Ferrari.  James Calado in the second AF Corse Ferrari was third, then Corvette Racing’s Nick Tandy and Bruni.

GTE-Am saw Dempsey-Proton Racing’s Julien Andlauer continue his speed chart dominance.  He was fastest in class in Wednesday’s qualifying session, along with Free Practice No. 2 and No. 3.  Hyperpole saw him continue his form with a lap at 133.729 mph to win the class pole.

Andlauer’s lap was nearly six-tenths of a second faster than GR Racing’s Ben Barker in another Porsche.  Team Project 1’s Matteo Cairoli made it a Porsche 1-2-3 in class.  Cetilar Racing’s Antonio Fuoco was fourth in his Ferrari, while Inception Racing’s Ben Barnicoat was fifth.

Track limits were once again an issue during the 30-minute session.  14 different laps were disallowed by the officials due to going out of bounds.  This affected the Glickenhaus No. 709 the worst as three different laps for Dumas, including his best lap, were nullified.

Friday is a quiet day for WEC teams at Le Mans.  There will be support races on the schedule, including a five-hour Fun Cup endurance race with 89 Volkswagen Beetles doing battle.  There is a 15-minute warmup session scheduled for 5:30 a.m. ET Saturday morning prior to the race.