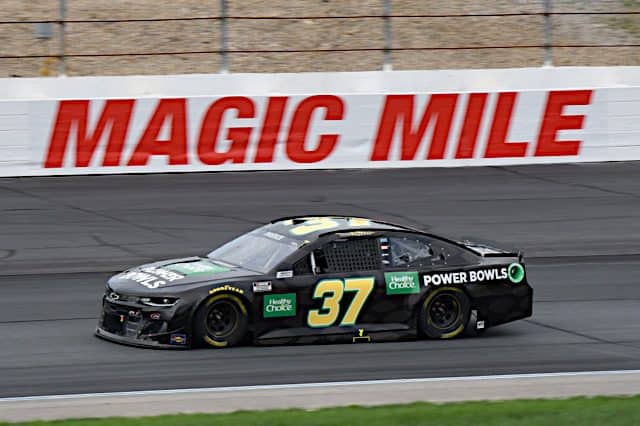 After more than a decade of sultry and seductive Southern summers, it was easy to forget how the season manifests in New England, with blazing days and gentle nights, but it was also easy to forget how fleeting they are. Already the trees are beginning to lose their summer green.

But as this summer begins its swan song, racing marches on, and there’s certainly been plenty to talk about this summer. And since this column only appears once a month, there are so many bits and pieces to fit into place in the puzzle.

Yeah, the Indianapolis Motor Speedway road course was a mess, but it was still a better race than anything we’ve seen recently on the Indy oval. While some may feel like NASCAR was demoted from the famed oval, that’s not the case. The big track simply doesn’t race well with stock cars; while the Indy 500 is almost always a great show, the Brickyard 400 hasn’t had many truly memorable races.

Moving to the road course wasn’t a step down, but rather a step forward in bringing fans better racing. And it generally worked.

Take away the mess in the closing laps when the curbing came up (something we can all agree should not have happened, even if it’s not the first time a track has had problems during a race and won’t be the last), and you actually had a pretty entertaining race. It was more fun to watch than most races on the big oval. That’s the goal here, and hopefully something than can be easily fixed in a year won’t make NASCAR balk at running the road course again.

Sure, Indy has history — but most of it is open-wheel history. The Indy 500 is a glorious pageant, but NASCAR has failed to capture the same magic.

While NASCAR tried nine ways to Sunday to put the event on the same level as the Month of May, it never happened, and in reality, it was never going to. NASCAR has its own history, and between the pageantry of the Daytona 500 and the history and prestige of the Southern 500, NASCAR certainly has plenty to work with. It doesn’t need to ride anyone’s coattails.

Speaking of Indy, NASCAR has an opportunity for another big fix after what went down. While many disagreed with the penalty to Chase Briscoe late in the race after he cut through a turn, NASCAR made the call based on the rule as written — that’s what they needed to do.

But the rule is silly. Obviously, a driver shouldn’t be able to intentionally skip a turn or chicane and gain positions from it. But the rule that says they must stop is overboard. They should absolutely have to give back any positions gained (Briscoe did that) but it should be treated more like the yellow-line rule at the superspeedways, where they can’t gain position, but are not penalized several more positions as long as they give it back. Making them stop is an unfair penalty as they lose too many spots.

The yellow-line rule also has a provision that could have prevented what we saw at Indy: if a driver forces another down there, there’s no penalty for the driver who crossed the line. Briscoe was forced off-track by Denny Hamlin on Sunday. He wasn’t trying to make his own shortcut or saying to himself, “hey, this chicane is hard so I think I’ll just skip it.”

It’s time for a rule change here — if a driver goes off course, he has to drop back to wherever he was running before. If he does it again in the same corner and isn’t forced, then it’s time for the stop and go.

Parking Briscoe for getting into Hamlin also only makes sense in the context that Briscoe hadn’t served his penalty. Otherwise, it’s a racing incident. The spin wasn’t necessarily as intentional as the aggression behind it; but Briscoe was also racing Hamlin the way Hamlin raced him when he forced Briscoe into the grass. Hamlin’s sour grapes afterward are understandable but also a little overboard — he’s not exactly innocent when it comes to using his bumper for a win. Just ask Chase Elliott.

Surprisingly the best show of the summer, and one of the best all year, came last month at New Hampshire Motor Speedway of all places. Loudon’s a strategy track. It’s hard to pass and setting up every move takes prowess, but doesn’t always make for compelling TV. But this year’s race, after a wild start (another incident that should not have happened, but did; Indy doesn’t have the corner on that after all), had plenty of action and a surprise winner to boot. Good stuff.

Behind the scenes, it was certainly a memorable weekend, because just as Kyle Busch was being interviewed after his early exit, the fire alarm in the press box went off, forcing an evacuation of the suite tower until the fire department could sort it out. Luckily it was over quickly; by the time the race resumed, we were back up and running with time to spare. Just another moment of the unexpected in NASCAR.

But as good as the Cup race at Loudon was, it wasn’t the best one of the weekend. That goes, as is almost always the case, to the Whelen Modified Tour race on Saturday. New Hampshire Motor Speedway is the modifieds’ Daytona International Speedway — they use the draft and the slingshot move as well as the Cup guys at the superspeedways.

Anyone who’s only seen Ryan Preece race (and struggle) in the Cup Series should find a replay of that modified race because Preece is a wheelman. He didn’t win because he dropped to a lower series in the most expensive car in the race; he outdueled the best in the series in equal equipment. It’s no coincidence that Preece runs well at the superspeedways — the cars matter less and if a driver can work the draft and make the right moves, he’ll finish up front. Now you know why Preece can race that way.

Preece is proof that lack of money does not equal a lack of talent at the Cup level. Money buys speed and always has, and it can buy wins, but a good driver is a good driver whether the equipment shows it. There doesn’t seem to be much confidence that NASCAR’s Next Gen racecar, which debuts next year, will really put races back in the hands of the drivers.

But the concept of putting great drivers in cars that are, at least in theory, equal, made the upstart Superstar Racing Experience series a fun watch this summer. While the series is a work in progress, it did a lot of things right, and now there’s a whole year to make tweaks based on what was learned this year.

The best part is that SRX seems to be willing to look at things, say, “Hey, we did that wrong,” and make a rule change to hopefully improve things. NASCAR could take a lesson from that. It’s much better to admit something isn’t working, or has never worked, as intended and make a change rather than to plow forward and try to cover the change with a band-aid that looks more like just another gimmick.

So while SRX could make some changes (younger, more relevant drivers, for one), it did a lot right. The emphasis was on race wins rather than the overall championship. That tone was set from the beginning when six-time modified champ Doug Coby won at Stafford Speedway, a track that’s been his personal playground, over the regulars. He was invited to the race because of that possibility. It was a local draw, it made the win matter, and it made for a great ending. That’s doing racing right. And there’s both the opportunity and the desire to make it better next year.

Speaking of next year, let’s talk about it for a minute. NASCAR has not released the 2022 Cup schedule yet, and while some pieces are in place, others appear up in the air. Dirt Bristol Motor Speedway will be back, and NASCAR will return to Auto Club Speedway for a last hurrah before the track is reconfigured. But with COVID-19 surging, some tracks may not host races.

This year’s schedule, some of it forced by the pandemic, was a major improvement. Hopefully NASCAR won’t revert to what it had before, but rather add more new tracks in the coming years. There’s no need to return to Chicagoland Speedway or Kentucky Speedway. Let Texas Motor Speedway keep the All-Star event in lieu of a second point race. Keep two at Darlington Raceway.

With talk of reviving North Wilkesboro Speedway that appears to be more meaningful than lip service, a short track at Fontana and the possible return to the Nashville Fairgrounds, there’s potential for NASCAR’s future to be built on its past, which is what the sport needs more than ever.