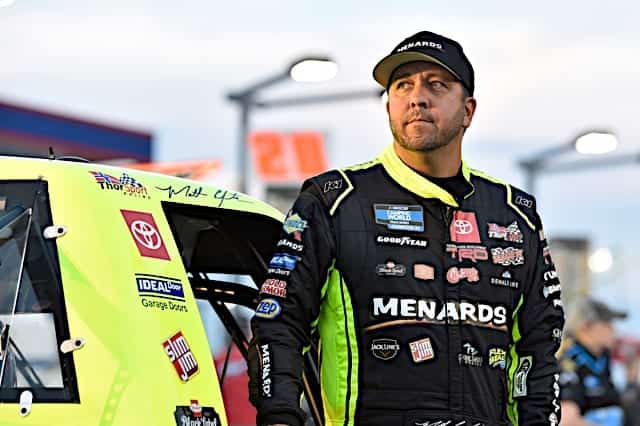 Author’s Note: This is part two of the two-part series looking at the 2021 Camping World Truck Series playoff drivers. Those who are seeded first through fifth were run last week and can be found here. The playoffs kick-off at World Wide Technology Raceway at Gateway Friday night (Aug. 20) at 9 p.m. ET on FOX Sports 1.

Even though he has more top 10s at this point in the season than he did in 2020 (nine), Zane Smith has flown mostly under the radar in the NASCAR Camping World Truck Series this year, thanks in large part to just a single top-five finish. Having led just 47 laps so far this year, Smith has three stage wins but has yet to snag a victory so far this season. He has a small advantage over the cut line for the Round of 8 and average isn’t going to cut it if he’s going to make it to the Championship 4 again this season. GMS Racing, as a whole, has been a bit off this season compared to its 2020 campaign, and if things don’t start looking up soon, it’s going to be a long playoffs for Smith.

Heading into this year’s playoffs with zero wins leave several drivers worried, but don’t expect it to phase Matt Crafton. After all, he won the 2019 championship without a single trip to victory lane. But perhaps what’s more telling about his season is that seven top 10s at this point put him on track for a low spot in that category that dates back to the early 2000s. Add in a current average finish of 13.3 and you have to look back to 2007 to find anything lower (14.1) and that was for the entire season. The key for the No. 88 team during the playoffs is definitely going to be having a solid setup to start the race rather than chasing it throughout and playing catch up. If those pieces can come together, Crafton may become a dark horse in the championship battle.

While Carson Hocevar has had a very up-and-down rookie season, he’s shown that when his truck is set up to his liking, he can compete with the veterans of the series. He’s one of two rookies in this year’s playoff field and not a driver I’d put money on to win the championship, but don’t think he’s going to lay over and just give up a win either. When he’s been able to run with the leaders, he’s nearly chased down John Hunter Nemechek, the winningest driver in the series this season. If Hocevar and the No. 42 team can finally get their first career win together at the right time, he could end up being an upset driver that knocks out someone who’s run stronger all season long.

The second rookie in the playoffs this season is running for a team that’s won two championships and 80 races since entering the sport in 2010. Chandler Smith and the No. 18 narrowly made it into the playoffs this year and definitely have their work cut out for them if they’re going to make it out of the first round. The good news for the rookie is that he’s matched his top-10 count from last season, albeit in 15 races instead of the 12 it took him in 2020, and he did lead a whopping 71 laps at Knoxville Speedway before finishing runner-up to Austin Hill. The problem for Smith, though, is consistency, as he’ll put together a couple solid races and then tank in the next one, whether through a mistake or no fault of his own. Coming off of a disqualification at Watkins Glen isn’t exactly the kind of momentum any team wants to take into its playoffs, either.

Now in his second season aligned with Kyle Busch Motorsports and running Toyotas, Stewart Friesen has shown an uptick in performance. Three top fives in 15 races matches the three he posted in the entire 2020 season, so that’s definitely an improvement in that area, though the top 10s are lacking this season. Friesen started off the season strong with just one finish outside the top 15 (32nd at Daytona) in the first seven races but that consistency has since dropped way off. He’s finished inside the top 15 just twice (fourth at Charlotte Motor Speedway; fifth at Nashville Superspeedway) in the last eight races. It caused him to plummet from fifth to 10th in the standings, and the final few weeks of the regular season saw the No. 52 team in serious jeopardy of missing the playoffs.