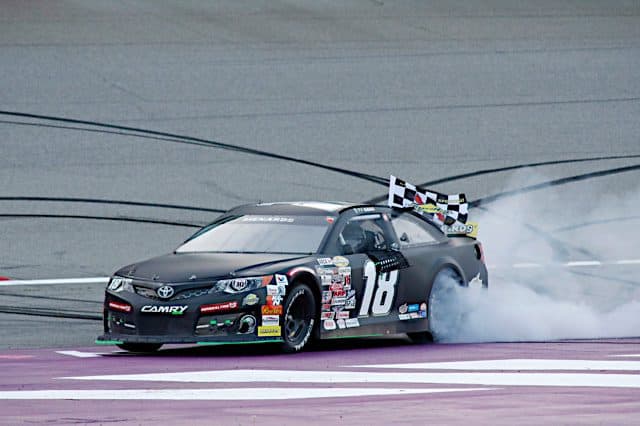 At Michigan International Speedway, Gibbs was the one on top. He fended off a ferocious challenge from Heim to win the Henry Ford Health Systems 200. It’s his eighth win of this season and his 16th career win. For his Joe Gibbs Racing team, it’s back-to-back wins at the 2-mile track in Brooklyn, Mich.

Heim finished second after he won the series most recent race at Watkins Glen International. His Venturini Motorsports team made numerous adjustments to his No. 20 Toyota, and he ultimately finished 0.237 seconds behind Gibbs.

“Just proud of my team for the recovery throughout the day,” Heim told Frontstretch post-race. “Venturini Motorsports did a great job getting me better from where we were. We struggled at the beginning and came home second. Without those guys making those changes, I don’t think we’re remotely close to winning the race.

“Shannon Rursch [crew chief] and my guys did a great job giving me what I needed there for the end. Finishing second sucks, but for how much we struggled earlier in the day, I think it’s a pretty decent finish for us.”

Corey Heim made it close but it's @TyGibbs_ who takes home win #8 of the 2021 season at @MISpeedway!@ARCA_Racing on #MAVTV #Motorsports #Network I #HFHS200 pic.twitter.com/dPHdAGw6iz

Nick Sanchez finished third, tying his career-best finish previously set at Talladega Superspeedway and Toledo Speedway. He will not be competing in the race two days from now at the Illinois State Fairgrounds.

In addition to the close finish as Gibbs and Heim dueled at the end, this race was an event-filled one, mainly involving Heim’s Venturini teammate Drew Dollar and Thad Moffitt.

Those two made contact on the opening lap, but ARCA officials didn’t throw the yellow flag.

Later in the race, Moffitt wrecked Dollar as retaliation. Collected in the process was Tim Richmond.

Richmond received the worst in the wreck, with a destroyed No. 27 and a banged-up body.

The final wreck involved another Venturini driver, this time Gracie Trotter. She and Jason Kitzmiller both wrecked by the entrance to pit road, resulting in DNFs for both drivers.

Trouble on the restart! ?

The action is heating up in the closing laps at Michigan!@ARCA_Racing on #MAVTV #Motorsports #Network I @MISpeedway I #HFHS200 pic.twitter.com/LHisDJv3Lk

When the checkered flag flew, Gibbs emerged victorious, adding to his series-high number of wins and points lead.

Next, ARCA will head about 400 miles to the 1-mile Illinois State Fairgrounds. Neither Gibbs nor Heim has won there before. Last year’s winner Ryan Unzicker will compete in that race. Xfinity Series regular Justin Allgaier will also compete in that race, and Allgaier won it in 2006. The Allen Crowe 100 will take place on Sunday, Aug. 22, at 2:30 p.m. ET, with TV coverage provided by MAVTV and available on TrackPass on NBC Sports Gold.