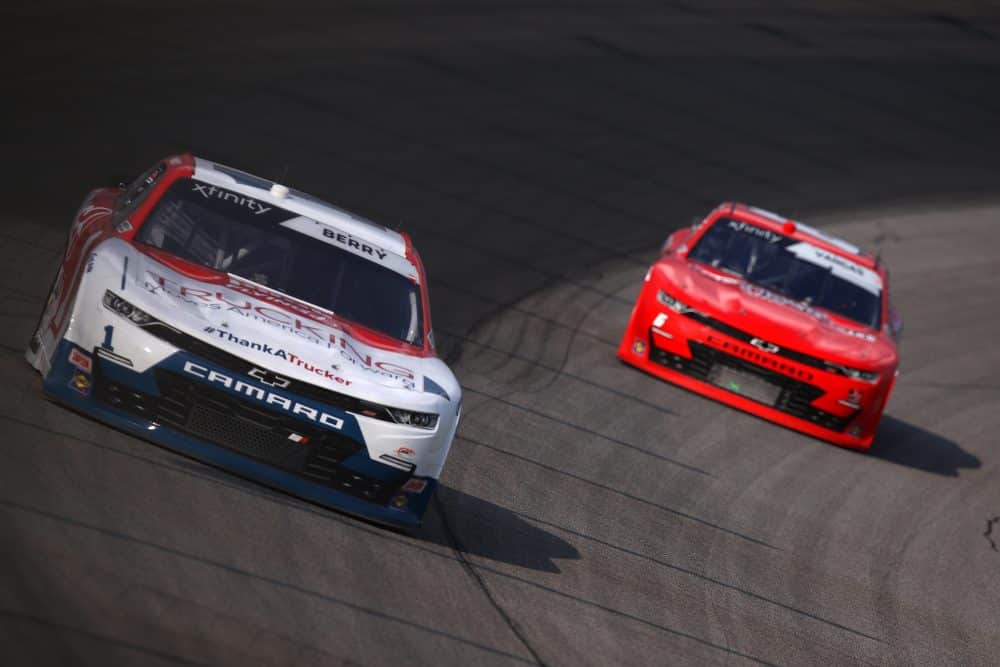 Brooklyn, Mich. – It’s been a whirlwind week for Josh Berry.

Then, Berry was elevated from one race this weekend to three races. He ran the NASCAR Camping World Truck Series race at Worldwide Technology Raceway at Gateway, finishing 15th. He then went to Michigan International Speedway for two races as a replacement driver. He filled in for an injured Michael Annett in the Xfinity race and will then will replace Corey LaJoie, who is in COVID-19 protocols, in the NASCAR Cup Series race.

Berry started the Xfinity race at the tail end, forfeiting the 17th starting position, due to the driver change.

He drove up to a ninth-place finish at the end of the first stage, clearly learning how to wheel the No. 1 Chevrolet at this 2-mile track. When stage two ended, he was in eighth.

Berry appeared set to battle teammate Justin Allgaier for the win in the closing laps before a caution ultimately resulted in three more subsequent cautions and restarts.

When the checkered flag flew, Berry finished in fourth. Nothing to frown at, certainly, but Berry left wanting a win.

“Wish it would’ve been green, that car was so fast,” Berry told media members post-race. “Had to come from the back twice after a pit road penalty. Just was able to get the lead there and drive away. The green flag stop was good, just about passed Justin right before that caution came out. After that, I don’t know. We fought a little bit of cycling loose on the restarts. I just got loose, AJ [Allmendinger] timed the run and got by me.

“After that, I’ve got to go back and study what happened there. The bottom lane is so hard to get formed up. I really needed an exceptional run on the bottom and AJ to have trouble to have a chance in [turns] 1 and 2. We gave it a good effort, but I definitely wish we would’ve won that one.”

Three JR Motorsports finished in the top 10 in the New Holland 250: Noah Gragson in third place, Berry in fourth and Allgaier in sixth.

“It was awesome,” Berry said. “Me and Justin battled it out there. It seems like we’ve raced a lot this year. We had a really fast car. The No. 1 team did a great job; they’ve had a lot going on lately. I’m really thankful we gave them a good run but I sure wish we could’ve won.”

His lack of inexperience, compared to the seasoned veteran race winner Allmendinger, may have cost Berry a win on the final restarts.

“I’m experiencing all these, all this stuff for the first time, a good run at Dover [International Speedway], Darlington [Raceway], and I learned a lot in those scenarios,” he said. “Sometimes you have just had to take the bottom and a lot of it’s dependent on who’s behind you, needing a good aggressive pusher that is willing to help you get going. It just didn’t work out today. I kept taking the bottom hoping a miracle would happen but it didn’t get going.”

In hindsight, all he thought he could’ve done differently was “be more aggressive there.”

With this exciting week, Berry hasn’t been able to fully celebrate all that has transpired for his career.

“It’s been crazy plus everything with my full-time announcement and our partners with Tire Pros and Harrison’s Workwear,” he continued. “It’s been a big week. I just want to thank Dale Earnhardt Jr., Pilot Flying J, Michael Annett, everybody on this No. 1 team for believing in me. It takes a lot of them. I had never been here; the first time I saw this place was this morning. Two of these teams chose me to drive their cars when there were other options. I’m looking forward to working with Spire Motorsports tomorrow and try to learn as much as I can and stay out of trouble. Obviously, it’s a big deep field and as long as I can finish with all the fenders on, I’ll be happy.”

His future for this year remains somewhat unknown. He said it’s week-to-week regarding whether he’ll compete in the Xfinity Series anymore this season, especially in the No. 1.

On the Truck side, Berry remains confident he’ll continue driving the Rackley No. 25 this season.

“I think so, I want to,” he said. “They wanted me to be their full-time driver next year. Not being able to do that changes their plans for next year. Aside from trying a guy in a race or two, more than likely I’ll be in it.”

Berry has one more race this weekend, tomorrow in the Cup race at Michigan. He’ll again forfeit his starting position of 24th due to replacing LaJoie.