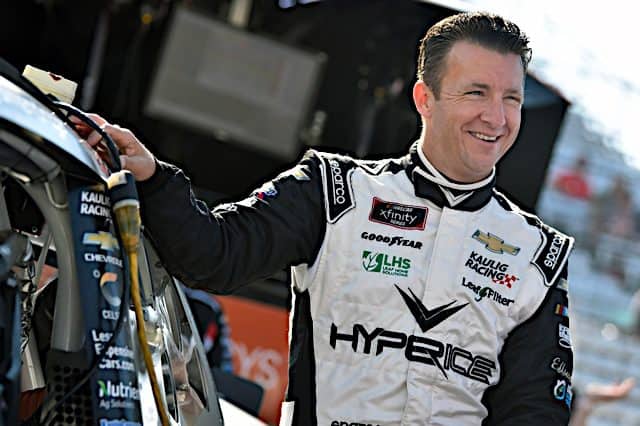 Allmendinger held off Brandon Jones, who finished runner-up after multiple overtimes due to cautions toward the end of the event.

“The outside was the place to be, you just hoped to be pushed — so Brandon Jones, thank you for that” Allmendinger told NBC post-race.

Stage one had Allmendinger pull away over two seconds from the pole. Things were calm until the stage break, during which everyone came down pit road and the bottom lane had a hard time going at the green. Austin Cindric prevailed and won stage one.

The second stage began in chaos as cars got stacked, which started with contact between Myatt Snider and Ty Gibbs, who Snider blamed for the chain reaction, which saw seven cars involved, including Bubba Wallace, Cindric, Daniel Hemric and Justin Haley.

After the chaos, everything resumed as usual. Jeb Burton led most of the stage’s remaining laps until Allmendinger took the lead from Burton to win the second stage. This was Allmendinger’s eighth stage win of the season after coming into the 2021 season with four.

The third stage saw the top lane be the dominant lane once again as Allmendinger drove away from the field. As Allmendinger led, Justin Allgaier and Josh Berry were closing the gap, and Berry made a wild three-wide pass around the two as they approached lapped traffic and weaved his Chevy between two lapped cars to take the top spot and drove away over by  two seconds.

The yellow flag came out with nine laps to go, taking away the fuel-only gamble Allgaier made. Several cautions and overtime attempts took Berry’s lead away, and Allmendinger drove his Kaulig machine to the win and a role as possible championship favorite.

Gragson finished third. Berry finished in the top five in fourth, with Harrison Burton in fifth.

Next, the series tackles Daytona International Speedway on Aug. 27, with coverage on NBC Sports Network at 7:30 p.m. ET.

Another oval win for Dinger. He’s been fun to watch lately.