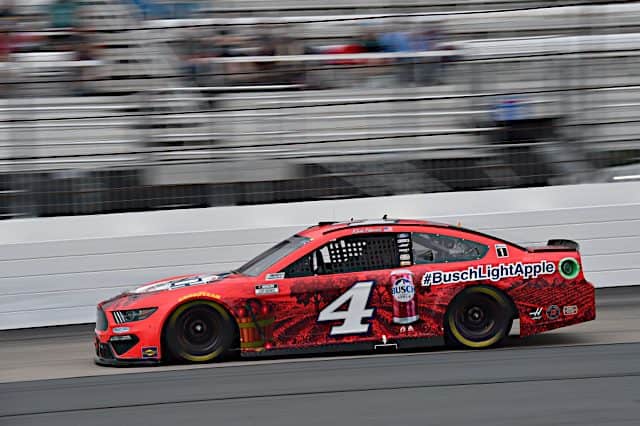 The NASCAR Cup Series head to the Irish Hills of Michigan this week for the next-to-last race in the regular season. Let’s get your daily fantasy NASCAR DraftKings lineups set for Sunday’s (Aug. 22) race at Michigan International Speedway.

The summer stretch of road races is done and it’s time for Cup teams to head back to ovals. It’s nearing crunch time for the playoffs, though, as there’s just two races left for drivers to lock themselves in the top 16. Last weekend at the Indianapolis Motor Speedway road course, AJ Allmendinger snuck in a win for the part-time, unchartered Kaulig Racing organization. The victory meant Denny Hamlin secured a spot in the playoffs on points. Michael McDowell and Aric Almirola are also inside the top 16, leaving just two positions open to grab in the last two races.

This weekend is important for drivers like Kevin Harvick, Tyler Reddick and Austin Dillon as they look to secure those bids. Harvick comes to one of his best tracks without a 2021 victory while the Richard Childress Racing pair has shown consistent top 10s and 15s throughout the season. It will be interesting to see how these next two events play out for the trio, especially next week at Daytona International Speedway.

But what does this mean for daily fantasy sports? Well, all three will likely push themselves to get stage points as well as a possible win. Remember last season when Dillon and Reddick gambled on the last pit stop at Texas Motor Speedway? Dillon won, while Reddick came in second. You have to think that something similar could happen if both didn’t earn enough stage points or if it appeared someone outside the top 16 would win on a final restart. While stage points don’t give you fantasy points on DraftKings or FanDuel, it could show their speed in the first two stages. Fastest laps are valuable bonus points that could help you cash your lineup.

Before I move on to this week’s picks at Michigan, here’s how last week went at the Indy road course:

This lineup actually almost came out pretty well until the final few laps. Dillon got in a wreck and Corey LaJoie flew through the air on one of those crazy, last-minute wrecks. Also, Hamlin and Chase Briscoe were out front on the final restart, but Briscoe cut across the grass after the first turn and then bumped Hamlin out of the way. The No. 14 was parked by NASCAR and both drivers finished worse than where they should have. That’s DFS for you; sometimes it comes down to the last minute (or lap) to know whether you cash or not.

At least this lineup cashed the $1 single entry double up. However, in the $1 Happy Hour tournament, you needed 189.8 to net profit 38 cents.

Larson seems to finish well even when he doesn’t have the best car, which is why I’m choosing him this week. He has five wins, 13 top fives and 17 top 10s so far this season. Two victories were at Las Vegas Motor Speedway and Charlotte Motor Speedway, racetracks where the lower horsepower package was used. He also nearly won at Pocono Raceway before suffering a flat tire in the final corner. The following day, Larson finished second with a messed-up nose when those ahead of him ran out of gas in the final laps.

At Michigan, Larson won three consecutive events from 2016-17, though he only led 139 laps during that period. He struggled the following three races in 2018-19 but was able to place third in the August 2019 race.

His career at Michigan isn’t as flashy, but since Larson joined Hendrick Motorsports this season he has truly shown the ability to lead laps at almost every track type. The No. 5 Chevrolet will roll off from the pole, so if he has a good start, the clean air should help him stay out in front a lot. And for what it’s worth, he’s getting the best odds to win this thing, so we’ll see if he can bring Chevrolet back to victory lane in Michigan.

Harvick might be a popular play this week, for good reason. Four of his five victories came within the last five events. He won the last three races and has led laps in each of the past six at Michigan. Last year, his No. 4 Stewart-Haas Racing Ford dominated for 92 and 90 laps in each respective race of the doubleheader weekend. Plus, in the August 2018 race, Harvick led 108 circuits en route to victory.

This year has been a vastly different story than previous ones, especially last year when he won nine races. However, he hasn’t been bad (at least on most of the 1.5-mile courses). Harvick ended eighth and fourth at Pocono, 10th at Charlotte and second at Kansas Speedway. Though he has yet to lead a lap this year on the tracks with lower horsepower, he did record 24 fastest laps at Charlotte. If the 2014 Cup champion can score a good result and post some fast laps this weekend, he’ll have a good fantasy score on DraftKings.

See also
Fire on Fridays: Will the Spotlight Ever Shine Again on Kevin Harvick?

Dillon has had varied results at the 2-mile track; he’s had several top 10s but has also finished 20th or worse several times. The rollercoaster ride continued last year, as he ended 31st in Saturday’s race and eighth the following day.

This season, Dillon’s been fairly steady on the 1.5-mile courses, finishing 12th or better in the majority of these races. That consistency is just what we need for Dillon, as he’s starting 27th on Sunday and can notch some position differential points on DraftKings with another top 15. Look for him to bounce back from his crash at Indy and possibly be aggressive to grab a win (as he’s on the outside looking in in the playoff picture).

Dillon’s cohort has twice as many top 10s this season and has also done very well on tracks like Atlanta Motor Speedway, Charlotte and Kansas. Reddick crossed the line sixth in the second Atlanta event, ninth in the Coca-Cola 600 and seventh at Kansas. These haven’t always translated to great scores on DraftKings because when Reddick finishes well in one race, he starts well in the next one thanks to the performance metrics formula. Still, the RCR driver does enough to help you win your contests.

Unfortunately, Reddick didn’t do well last year in either race. He ended 18th and 24th in the MIS events, respectively. However, he does have a victory in the NASCAR Xfinity Series at Michigan in 2019. He also finished seventh in 2018. Though these successes didn’t translate to the Cup Series last year, Reddick’s strength in the 550-horsepower races this season should benefit him this week.

Briscoe was seventh in the 2019 Xfinity race at Michigan but didn’t lead any laps. This year, Briscoe has mostly done well on the road courses. In fact, the rookie almost won last week if he hadn’t cut through the grass and bumped Hamlin from behind later on. Those racetracks were the only places where he’s earned top-10 finishes this season.

However, at Atlanta last month, he ended 15th. Also, earlier in the year at Homestead-Miami Speedway the No. 14 pilot started 30th and came home 18th. These may not seem like very good results, but at his price point, that may be all you need to win your DFS contests. Hopefully he can avoid the carnage and get a good finish.

Wallace has a pair of 19th places at Michigan in 2017 and 2018 in his first years with Richard Petty Motorsports. Then, last season he was ninth in the first race of the weekend doubleheader here. He now drives a Toyota for 23XI Racing and has just one top five this season, a fifth at Pocono. Still, he has some results in the teens at Charlotte and both Atlanta races.

Last week, Wallace had a wild day at Indy; he crossed the line 13th after going around the big curb to save his racecar. Wallace has several other top-15 finishes at Sonoma Raceway, Dover International Speedway and the first Pocono race. He’s a bit more risky than others in this range, but he’s done well in the past at Michigan in other series. Hopefully, he keeps his car clean and earns a 14th or better.