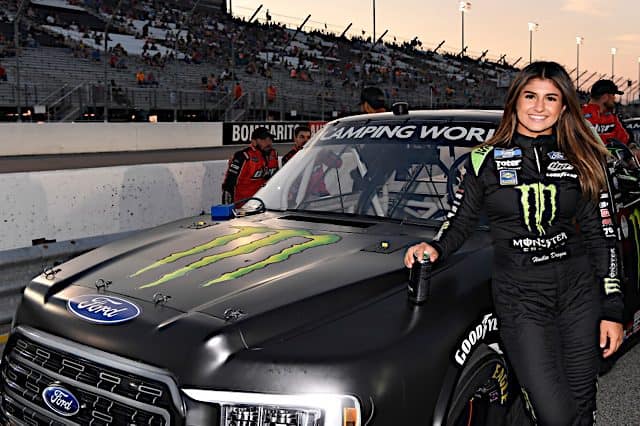 Madison, Ill.— Hailie Deegan may not have won at World Wide Technology Raceway at Gateway, but she did accomplish an impressive feat.

By avoiding late-race trouble, Deegan scored the best finish for a woman at a non-superspeedway race in the NASCAR Camping World Truck Series, coming home seventh.

“We have had a rough year. We have had our ups and downs,” Deegan told Fox Sports 1 after the race. “We had our good moments and had our not-so-good moments. To come out here, get a solid finish and have something to build off of in these next couple of races, it is going to be huge for me.”

Deegan’s rookie season in the Truck Series has been quiet yet productive. Before this weekend’s race, Deegan had a best finish of 13th at Kansas Speedway and Charlotte Motor Speedway.

Being at a familiar track she had competed at previously in other series, Deegan felt confident going into Friday’s race.

“I feel like the tracks where we would have the chances of our best finishes will be at Gateway and Phoenix [Raceway], tracks I’ve been to before,” Deegan told Frontstretch before the race. “[Las Vegas Motor Speedway], we will get a good finish out there because we have been there.”

Starting from the 19th position, Deegan was hovering mid-pack for most of the race. Her luck changed on lap 115. While most of the field was wrecking for John Hunter Nemechek not going on a restart, Deegan avoided the spinning truck of Christian Eckes. After that wreck, Deegan was in the top 10, where she stayed until the checkered flag flew.

Deegan will experience a new venue next weekend as Darlington Raceway is the next race for the Truck Series. Deegan will look to improve on her best career finish of seventh.