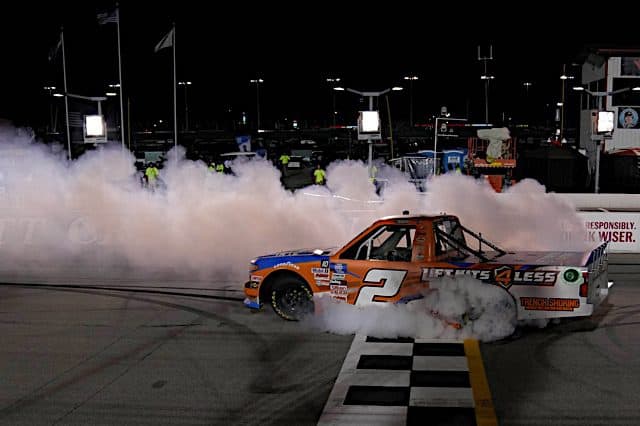 Leading 139 laps, Creed dominated to win the Toyota 200 to kick off the 2021 Truck Series playoffs at World Wide Technology Raceway at Gateway.

Creed took on all comers on one green-white-checkered attempt and prevailed over Matt Crafton, Ben Rhodes, Stewart Friesen and Johnny Sauter.

Austin Hill led from the outside of the front row but Creed made his presence felt early as he took the lead on lap 3. Chris Hacker was the first truck to face significant trouble as he started showing smoke on lap 12 with a hole in the oil line. Hacker went behind the wall shortly thereafter but returned after repairs. NASCAR did not throw a caution until lap 25 when Chandler Smith’s truck started trailing a lot of smoke and went behind the wall with a right rear hub failure.

Zane Smith took the lead as the race restarted on lap 30 but the caution came out three laps later as the No. 04 truck of Cory Roper spun around once without hitting anything in turns 3-4.

The race resumed on lap 38 but went under caution again following Derek Griffith spinning on the backstretch on lap 41.

The race resumed on lap 46 but there was a fierce fight for the lead as Creed took the lead from Smith on lap 50 and won the first stage as Smith fell to fourth behind Friesen in second and Rhodes in third.

Creed led the field to the restart following the stage break, but the caution flag came out on lap 61 as part of the track’s electrical supply went off, leaving some of the track’s lights on, but nothing in the press box and half of the backstretch was dark.

The race resumed on lap 67 with Creed leading the rest of the field. While Creed was pulling away from the field, the No. 30 of Danny Bohn pulled behind the backstretch wall with mechanical trouble.

Speaking of mechanical trouble, Smith pulled into the pits just after lap 100 with brake problems that would put the NASCAR playoff contender behind the wall.

Creed won stage two with Rhodes and Crafton in second and third, respectively. Creed started on the outside of stage three but the caution was out again on lap 113 as John Hunter Nemechek slowed on the main straightaway, causing a chain reaction accident involving Tyler Ankrum, Todd Gilliland, Ty Majeski, Christian Eckes, Austin Hill and Jake Griffin in a separate incident behind the pileup.

Creed led again on the restart but not all was well behind him as the hood on the No. 9 truck of Grant Enfinger came up over the windshield. On lap 129, Nemechek pulled onto pit road with a blown left front tire that appeared to have a brake rotor on fire inside of the wheel. However, Nemechek returned to the race after his truck was repaired.

A smooth run to the checkered flag was not in the cards as the caution flag flew with four laps to go in the scheduled distance after Tanner Gray had contact with Carson Hocevar, sending Gray spinning into the turn 3 wall.

Creed held off all comers to win, while the rest of the field wasn’t as lucky as Ryan Truex and Taylor Gray tangled on the last lap, dropping both out of the top 10.

Rounding out the top 10 were Chase Purdy in sixth, followed by Hailie Deegan, Hocevar, Austin Wayne Self and Jack Wood.

The series travels next to Darlington Raceway on Sept. 5.