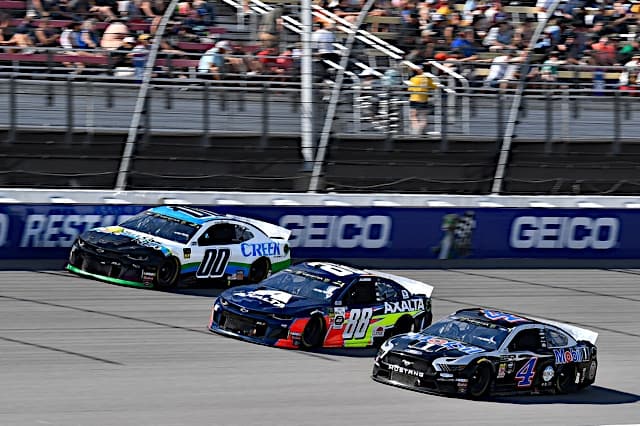 The NASCAR Cup Series field is probably glad to be away from road courses for a while.

After the outright chaos and destruction that ensued last week at the Indianapolis Motor Speedway road course, when the track’s curbing came apart and sent nearly a dozen cars spinning, it’s back to oval racing on Sunday (Aug. 22) at Michigan International Speedway for the FireKeepers Casino 400.

Larson and Harvick head into the race as arguably the two biggest drivers to watch. Larson, with five wins to his name so far this season, managed a third-place finish last week in Indy. He’s historically very, very good at Michigan: his first Cup win came at MIS in 2016, and he followed that up with a commanding 2017, sweeping both races there that year. Larson has six top-10 finishes out of 12 races in the Great Lake State, but his recent results might be more appropriate as the subject of a ballad like Gordon Lightfoot’s song “The Wreck of the Edmund Fitzgerald.” Three of the past four races he competed in there concluded with Larson outside the top 10.

Ever since his suspension in early 2020, Larson has not raced at Michigan; Harvick, however, has — and well. After 40 races in current manufacturer Ford’s backyard, Harvick has five wins and three straight at the track, including a sweep of the doubleheader there last summer. He led 182 laps within the span of about 30 hours en route to the sweep,

Around the motorsports world this weekend, the 24 Hours of Le Mans kicked off across the pond in France, while Formula 1’s summer break continues. Josef Newgarden scored the NTT IndyCar Series victory at World Wide Technology Raceway Gateway on Saturday (Aug. 21) night. On the NASCAR front, AJ Allmendinger followed up his Cup win last week at Indy with an Xfinity Series victory at Michigan on Saturday, while a dominant Sheldon Creed outlasted a power outage and late-race carnage to secure a Camping World Truck Series win at Gateway Friday (Aug. 20) night.

Josh Berry came oh so close to a victory in Saturday’s Xfinity Series race. Berry finished fourth after a 15th-place effort in the truck race, and will also jump in a Cup car for Sunday’s race; he replaces Corey LaJoie, who was sidelined due to COVID-19 protocols.

Check out the FireKeepers Casino 400, set for 3 p.m. ET with coverage on NBC Sports Network.