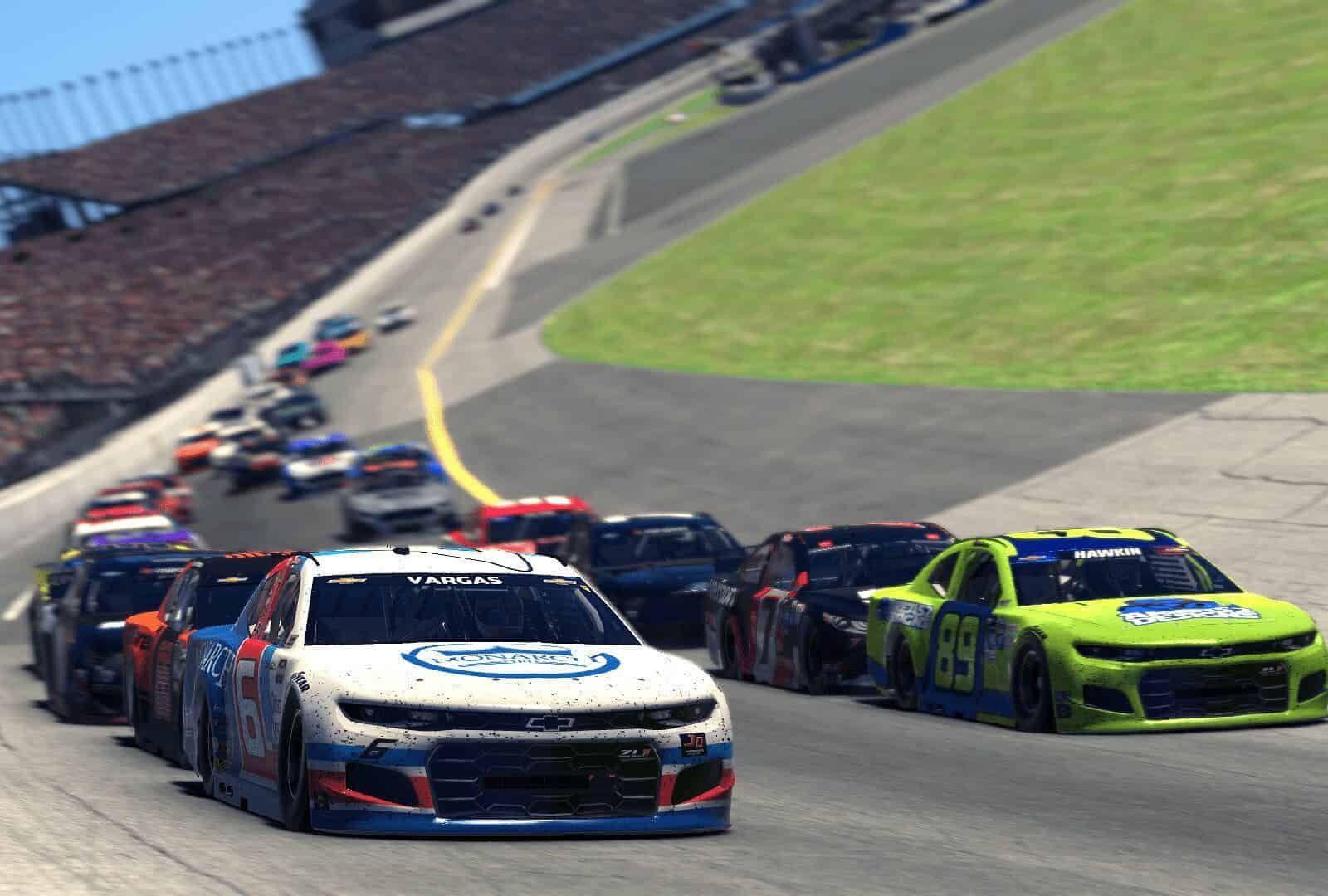 It’s been a busy week in the world of virtual racing, and there’s a little something for everyone.

eRacr.gg’s Roval Racing Series took to Auto Club Speedway and raced around the parking lot for an hour. 100% Cup Series did the same at the old edition of iRacing’s Indy Road Course.

Finally, the eNASCAR Road To Pro drivers threw it back to Rockingham Speedway for its fourth race of seven. Check out this week’s roundup below.

The fifth race of the inaugural eRacr.gg Roval Racing Series took the multi-class NASCAR road racers to Auto Club Speedway. The 2.8-mile course takes drivers through half of the oval from the line through turn 2. In the middle of the backstretch, drivers enter the infield for some longer straights and tight chicanes. The roval, in total, is 20 corners.

After the hour-long battle, Cody Harris defeated Christian Pedersen for the Class A and overall victory. Brian Szabelski capitalized on the misfortune of others to take the Class B victory. David Grantham started in the back but wound up winning the Ballistipax Class C battle.

P1 in my @eRacr_gg Roval Series debut!! The track was hot and slick and it was a game of managing tires. The racing was close and clean & I managed to come out on top! Looking forward to the last race of the series next Saturday! I wish my schedule allowed me to make all of them! pic.twitter.com/sGJVLZYrPT

With only one race remaining and the drop taken into account, Matt Danson has clinched the Class A eRacr.gg Roval Racing Series Championship, no matter what happens at Homestead-Miami Speedway.

Class B is a little closer after Matt Taylor ran into VR headset issues at Auto Club. Szabelski is 17 points behind and could mathematically take it away from Taylor if his issues persist.

The most compelling title may be the Ballistipax Class C Truck title, but that’s dependent on whether Brandon Paunetto is able to race. Paunetto sits 10 points behind Grantham entering the finale.

Points heading into round 6 of the eRacr Roval Racing Series!

We have the B class, and the @ballistipaxllc C Class championships up for grabs!

The season will conclude with a 90 minute finale from Homesteads Road Course this saturday!

Check out the action over at eRacr.gg.

The road course king strikes again. Jon Dulaney was able to close his seventh win on the 2021 100% Cup Series season with another checkered flag at Indianapolis Motor Speedway’s road course.

This season, Dulaney has four starts on the five road races this season, and he’s won all four times.

Dulaney didn’t pull off the perfect game this time out. Bryson Hixenbaugh stole the pole position and led 13 laps. Dulaney didn’t put a lap time down and started in 16th. Even though it wasn’t perfect, Dulaney did score max points, winning both stages, leading 65 laps in the process.

Now three drivers have 19 of the 24 race victories. Dulaney ties Adam Benefiel on wins at seven total while Hixenbaugh, who hasn’t won since Nashville in June, has five wins.

The final race of the FTF Cup regular season left the opportunity for some drivers to possibly win their way into the title fight. Blake Trawick, Jack Paynter, Ryan Pandiscio and Andy Margo all had an outside shot at stealing the final spot from either Evan Rice or Jake Poulin.

Pandiscio and Paynter were taken out early. Margo led at one point, running second with 10 laps to go before needing to pit. With a late caution, Trawick was in position, but a last lap debacle took him out as well.

Blake Reynolds, who won his first career FTF Cup Series the week before at Michigan, was able to survive and double up his win count after Daytona. Reynolds survived as Michael Guest and Michael P Frisch wrecked for the lead on the backstretch. NASCAR Xfinity Series competitor Ryan Vargas made it through the wreckage to finish second.

How about it? Blake Reynolds (@blakereynolds66) wins two in a row to cap off the 2021 Regular Season.

The Driver's and Owner's Playoffs are set! 10 races to go! pic.twitter.com/dC2eKBTmnJ

With the 16 driver playoff field set, the FTF Cup drivers head to Darlington Raceway next week. The race was originally scheduled for Aug. 22, but due to Hurricane Henri, the series was forced to change their schedule.

Originally scheduled for Darlington Raceway, Monday Night Racing switched up the schedule a few hours before the race and went to the Virtual Irish Hills of Michigan for the Maconi Setup Shop Classic.

Gabe Wood, fresh off his first career MNR victory a week prior at Homestead-Miami, was able to double up after a wild last lap at Michigan. As Garrett Smithley and Will Rodgers ran each other with their elbows out, Wood snuck through with help from Ryan Vargas to take the win and another win.

With only one race until the Championship 4 is set, it’s anyone’s guess as to who will race for the championship this season. A costly incident for Rajah Caruth early, a similarly costly late incident for David Schildhouse and a controversial penalty for Max Kennon places the trio in the bottom of the playoff standings.

Nobody is locked in, but Smithley, Robby Lyons, Adam Cabot and DJ Cummings are all in better position as the final seven all go at it at Auto Club Speedway.

The eNASCAR Road To Pro Qualifying Series took its talents over to Rockingham Speedway for the midway point of the second round. In the first split, a slew of cautions toward the end meant a handful of overtime restarts.

Darik Bourdeau started on the pole and led most of the race, but it was Kollin Keister who held on in the final laps to win his first race of the season. Bourdeau finished second while Parker Retzlaff finished in third.

In the second split, Cody Byus looked to have the best speed in the field. Byus took the pole position over Donovan Strauss and led the first 21 laps. The second caution brought the field to pit road for the first time in the race, and that was all it took for Strauss to take control.

Strauss won the battle off pit road and led the remaining 179 laps en route to his third victory of the season. Byus slipped back to finish in 11th. Liam Brotherton and Jordy Lopez Jr rounded out the podium.

Including the drop week, with Keister’s victory, he moves up to fourth in the standings. As long as he doesn’t miss another race in the final three, he’s trending towards another season in the eNASCAR iRacing Road To Pro Challenger Series.

For Strauss, with his lowest finish being a fourth place at the Glen, his current point total is maxed out. It would be incredible for him to continue winning, but even another top five or a couple of top-10 runs will guarantee his place in the next round.

eRacr.gg’s Roval Racing Series will conclude on Saturday night at the Homestead-Miami Speedway Roval. It will be completed before this roundup post goes live. Like the 100% Cup Series, the recaps will be posted next week. All replays can be found on eRacr.gg.

100% Cup Series will head to the Michigan Int’l Speedway on Saturday night at 8:30 p.m. ET. The replay will be available on 3 Wide TV.

Monday Night Racing heads to Auto Club Speedway in iRacing’s NASCAR Xfinity Series vehicles this week to conclude the Round of 7. The broadcast will start at 8 p.m. ET on Podium 2.

Both FTF Racing’s Cup Series and the Road to Pro Series are off this upcoming week.