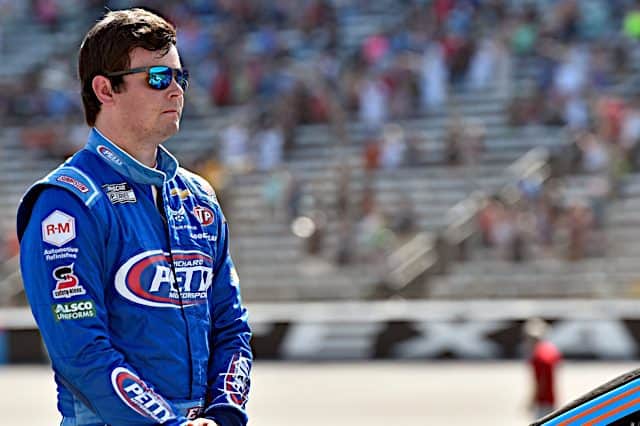 For the first time in over a month, the NASCAR Cup Series found itself on an oval. It was quite a step up from the last two weeks of rights and lefts on road courses as drivers faced the two-mile track of Michigan International Speedway.

Only two races remained in the regular season as drivers rolled into the Irish Hills, with many teams eyeing the playoffs. It was an improbable expectation for an underdog to grab a win under normal circumstances, but the race displayed craziness itself, even among the Cup underdogs.

For the third time in the last five races, it was Erik Jones standing atop the dog house in the end. Jones finished 18th despite not leading the underdog charge for most of the day. This also comes a week after he netted his third top 10 of 2021 at the Indianapolis Motor Speedway road course, though AJ Allmendinger’s win bested his seventh-place performance.

While an 18th-place result might not have been what the 25-year-old was looking for, it was a special weekend for Jones. The Byron, Mich. native returned to his home track with a couple extra incentives of motivation. He announced the launch of his own Erik Jones Foundation, a charitable organization targeting the trifecta of increasing children’s reading interests, early cancer detection and promoting animal wellness, three areas personally tied to Jones’ story.

“These three aspects of my foundation might seem different, but they all came together when my dad was battling cancer,” Jones said, who lost his dad to cancer in 2016. “Getting lost in a book and having a pet who seemed to understand what you were going through was like therapy. I know I’m not the only one who feels this way, and I’m lucky enough to be in a position in my life where I can help others. That’s what my foundation is about.”

That was only the beginning of a big weekend for him as Richard Petty Motorsports announced Jones will be back in the famous No. 43 in 2022.

“I’m just happy to have it done at this point in the season and to be able to focus not only on the rest of this year but work on getting next year settled in with a new car and everything going on there,” Jones told NASCAR.com

Jones can breathe a little easier now, despite sitting 24th in the standings and focus on the remainder of the season. As for the race, it was the fourth top 20 in the last six races for Jones. While those aren’t race-winning numbers, it’s the consistency that Jones needs and has struggled to put together for much of this season.

But it wasn’t all easy for the No. 43 team. A top-20 stage one finish was followed by an unscheduled pit stop for a vibration that left him 32nd at the end of stage two. A late-race caution for rain put Jones back on the lead lap and allowed spotter Rick Carelli to successfully guide him through a multi-car crash and in 18th-place finish.

“It ended up being an OK day; it was just up and down,” Jones said following the race. “We got caught a lap down early with a loose wheel. The middle part of the race, there just wasn’t much going on. It was good to get back on the lead lap and at least salvage a top-20 out of it for our Richard Petty Motorsports No. 43 Medallion Bank Camaro ZL1 1LE. We were just tight all day and couldn’t really get it to do much other than that. We’ll go on and see what we can learn from it. Hopefully, we’ll go to Daytona (International Speedway) and get a win.”

The chances of an upset win at Daytona are not as narrow as some think. The No. 43 has a good history at the track’s summer race, including a rain-shortened win from Aric Almirola in 2014. Additionally, Jones earned his first career win in dramatic fashion at the Coke Zero Sugar 400 in 2018 and nearly broke through a year ago before getting caught up in a late crash. Do not rule out the No. 43 next Saturday night.

Bubba Wallace was another underdog with an eventful weekend. For the first time since a start at Chicagoland in 2017, Wallace appeared in a NASCAR Xfinity Series race, this time driving the No. 61 Toyota for Hattori Enterprises. Hattori’s normal driver, Austin Hill, competed in the NASCAR Camping World Truck Series playoff race at World Wide Technology Raceway at Gateway on Friday (Aug. 20). Despite getting involved in a multi-car incident in stage two, Wallace recovered for a 10th-place finish.

His Cup race wasn’t as eventful and didn’t produce as strong of a finish either. After a 16th-place stage one showing, Wallace drove up to ninth in stage two, running laps equal to the leaders. However, the car got loose as the run went along, dropping the No. 23 McDonald’s Toyota to 16th at the end of stage two. Despite having his early form in stage three, the challenge of dirty air was too great for Wallace and ended with him crossing the line in 19th. That’s back-to-back top 20s for 23XI Racing and Wallace, but they are still left with the lone top 10 at Pocono Raceway in June.

Meanwhile, Michael McDowell flirted with the top 20 for most of stage one before ending stage two in 18th. It was stage three, though, that showed the improvements in speed that Front Row Motorsports has made on intermediate tracks this season. The Phoenix, Ariz. native spent most of the stage in the top 15, getting as high as 12th during the green flag runs. The No. 34 Martin Transportation Systems/Love’s Travel Stops Ford finally started to run wide open in the turns as McDowell laid down some fast laps.

While running in 12th with 14 laps remaining, McDowell had a hold your breath moment by narrowly avoiding a multi-car crash. The late restart shuffled him back, forcing him to settle for a 20th-place finish. Still, the No. 34 showed some good speed that can encourage the team as the playoffs approach. In fact, it’s McDowell’s best finish since a 19th and 17th in the Pocono Raceway double-headers in June.

Like several underdogs, the late-race drama marred a solid run by Ryan Preece. He charged from his 32nd starting spot to as high as 14th in the second and final stage. But by the time the checkered flag flew, Preece was 21st, which was still his best finish since an eighth-place run at Pocono in June.

A 22nd-place finish isn’t exactly one to write home about, but for Daniel Suarez and Trackhouse Racing, it’s a positive light in what has been a tough stretch of races for the first-year team. Finishes of 31st or worse in four of the last five races have dropped Suarez well outside the top 20 in the standings and put him out of position for a surprise playoff berth. After struggling with the balance on the car for much of the day, an attempt at pit strategy put Suarez fifth, though the stint near the front of the field was short-lived.

A big hearty shout-out is deserved for Jade Buford and his No. 48 Big Machine Racing team. Buford earned an eighth-place finish in Saturday’s (Aug. 21) NXS race at Michigan, tying his career-best. The No. 48 team has been fun to watch this year, as Buford has consistently over-performed, elevating his team week in and week out. Buford recently joined Frontstretch to detail how he met team owner Scott Borchetta and the expectations and evaluation he currently holds.

A couple of weeks ago, I detailed that we would be following Niece Motorsports’ Carson Hocevar throughout his playoff run. While he may not be an underdog competition-wise, he is certainly the dark horse of the playoff field who continues to impress. Early on in Friday night’s race at WWT Raceway at Gateway, Hocevar struggled to gain a grip of the track, falling outside the top 20. However, playoff teams are there for a reason, and the No. 42 team showed grit in improving the truck throughout the race.

In a night that saw a pileup, several playoff drivers endure troubles and even a power outage, Hocevar survived it all to finish in eighth. The Portage, Mich. native sits in seventh in points with two races in the Round of 10 remaining. He currently sits 13 points above Zane Smith, the first driver below the cut line.

Golden Nugget Casino came on board with Anthony Alfredo and Front Row Motorsports for the first time this season, gracing the scheme of the No. 38 Ford Mustang. A tire issue that turned into more issues forced Alfredo to the garage in the final stage, but the scheme itself was “golden” (I’ll see myself out).

We appreciate @GNOnlineCasino coming on board with @anthonyalfredo and our No. 38 team today at @MISpeedway. We can’t wait to see them again at @RichmondRaceway! pic.twitter.com/knBbzzX0iU

That time is here for Cup fans! The moment of uncertainty that keeps drivers up at night looms in the form of Daytona International Speedway as the regular season comes to a close. Several drivers are in a must-win situation and that includes many underdogs who see this as not only a chance at the playoffs but their best shot to win this year.

The NASCAR Xfinity Series also will be in Florida for the exciting weekend, though they still have four races to go before the playoffs start.

Meanwhile, the NASCAR Camping World Truck Series will spend next weekend off before heading to Darlington Raceway on Sept. 5.

Always good to come back home. ? We fought all day long and improved throughout the race. Ended up P18 with our @MedallionBank Chevy at Michigan. Thankful for all of the support this week and excited for what's to come. Let's head to Daytona. @RPMotorsports pic.twitter.com/wz0oUASO7m

BREAKING NEWS: @Erik_Jones will return to @RPMotorsports for the 2022 NASCAR Cup Series season.

One more shot next week at Daytona. pic.twitter.com/Rqg9rPnkIO

Thanks for following along everyone! Thanks to @Kroger @Entenmanns & @Maxwell_House for the support this weekend!

.@jade48buford reflects on his first top-10 finish of the season with Big Machine Racing and his first career @XfinityRacing top 10 on an oval. @bigmchnvodka | @SpikedCoolers #NASCAR pic.twitter.com/NJRnqHY0Uo

Everything happens for a reason, but this is getting old. God has a plan and we just need to keep the faith and trust it. Thank you @GNOnlineCasino @Team_FRM @FordPerformance pic.twitter.com/dSPMQCAQaY

What a deal, get other people to put up the money and you get the credit! Finally getting into the big leagues of financial manueving.