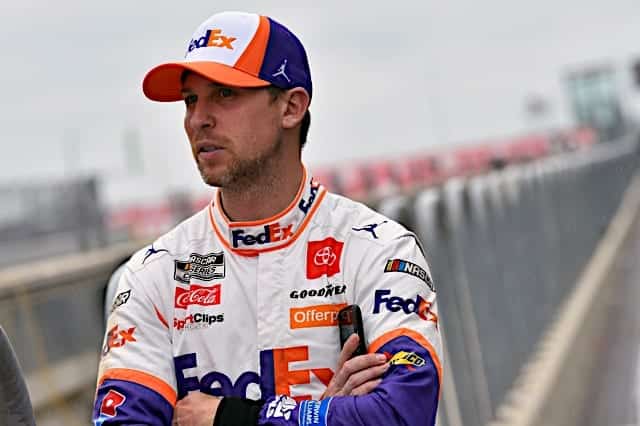 If Denny Hamlin can take any solace from his last two races, it’s that he has been close to victory lane.  During the closing laps of last weekend’s race at the Indianapolis Motor Speedway road course, Hamlin had the checkered flag in sight.  The same was true for Sunday’s race at Michigan International Speedway.  But Hamlin came up empty in both events.  And now, 25 races into the Cup Series season, Hamlin still does not have a win.

The loss at IMS was especially brutal.  Leading with less than two laps to go, Hamlin got spun off course by Chase Briscoe.  Whether that spin was either an accident or retaliation from Briscoe for getting run off the track by the No. 11 mattered little for the end result – a 23rd place finish for Hamlin.  AJ Allmendinger’s win, a victory by a driver not eligible for the Cup Series playoffs, did lock Hamlin into the postseason.  Yet that was a small comfort after seeing a win at Indy slip away.

At Michigan on Sunday, Hamlin was fast again.  When the race went green for the final time on lap 193, Hamlin lined up in the outside line in second behind William Byron.  Hamlin attempted to push the No. 24 into turn one, but the push got Byron out of shape and broke both drivers’ momentum.  The bobble by Byron and Hamlin gave drivers who started on the inside lane an advantage, including Ryan Blaney.  The No. 12 swept into the lead and held it all the way to the checkered flag.  Hamlin had to settle for 5th.

“I tried to make a move on the 24 and he was so concerned with me, he lost the lead as well chasing us up (the track),” Hamlin said.  “It’s crazy racing.  Everyone is just kind of sliding (into) each other and it’s actually a decent amount of fun.”

For Hamlin’s sake, it was nice to see him smiling after the heartbreaker last week.  But with the end of the regular season quickly approaching, Hamlin is facing a serious problem.  The No. 11 team has only banked five playoff points.  All of them came via stage wins, including three in the first two races of the season.  Hamlin has not accrued any playoff points since Richmond, despite having a really good year and leading the overall points for the vast majority of 2021.  As of Sunday, Hamlin has already posted 17 top-10 finishes, the same number he had in all of 2018.  But all of those good finishes have meant very little in terms of playoff points.

Hamlin has even watched his points lead disintegrate in the last few weeks.  While Kyle Larson had been lurking closely behind Hamlin for several races, it took the incident at Indianapolis with Briscoe to dislodge Hamlin from the points lead for the first time since the Daytona 500.  Now, Hamlin finds himself 28 points behind Larson heading back to Daytona for the regular season finale.

Another stop at Daytona before the playoffs begin is good news for Hamlin.  Five of his last seven trips to the World Center of Racing (on the oval) have resulted in top fives, including two Daytona 500 wins.  Larson, on the other hand, has typically struggled at superspeedways and has never scored a top-five finish in a full-field race at Daytona.  It is not impossible for Hamlin to make up that points gap on the No. 5 team.  Additionally, the driver third in overall points, Kyle Busch, cannot mathematically catch Hamlin in one race.  That means Hamlin will finish second in regular season points even in the worst-case scenario.

Hamlin has a lot riding on this final race.  Winning the regular season title nets him 15 more playoff points, while finishing second gives him 10.  As a result, Hamlin will start the season with no fewer than 15 playoff points.  Yet he could have as many as 27 – another 15 if he were to pass Larson for the regular season title, plus seven more if he were to win the race and both stages at Daytona.  The difference of 12 playoff points may not seem like much, but earning those extra points would lift Hamlin closer to the range of playoff points with which most title contenders typically begin the postseason.

Considering Hamlin’s strong 2020 season and his admirable consistency this year, most observers of NASCAR have assumed that he will be a factor in the championship battle.  But if Hamlin starts the postseason with only 15 playoff points and still cannot find victory lane, he may get pushed out of title contention by drivers whom he has currently buried in overall points.  All of the races earlier this year that Hamlin might have won had a few things gone differently could easily come back to haunt the No. 11 team.

“The FedEx team’s just really been strong all year long,” Hamlin said after Sunday’s race.  “We just can’t get a caution right, can’t get a restart right, can’t get just little tiny things right to get a win.  But we’re in the hunt every single week and that’s all we can ask for.”

Hamlin really has enjoyed a good season and deserves to fight for the title.  But NASCAR history is littered with good teams who did not reach their full potential in a given year due to little things that kept them out of victory lane, and ultimately away from the championship.  If Hamlin wants to avoid that fate, he needs a few checkered flags, starting next week.  The No. 11 team is locked into the playoffs.  But in terms of establishing true contenders for the 2021 Cup Series championship, nobody needs a win right now more than Hamlin.

He doesn’t have to worry because he doesn’t need a win to get the title.

I’m not a Hamlin fan, but hilarious to think of a Nascar champion without a win.

It will never happen. Whoever wins the championship will win the final race at a minimum. The other 36 drivers don’t even try, so one of the four championship drivers will win by default.

There is always the chance that the four could all be involved in a wreck and fail to finish and the driver finishing highest would win the title, even if he didn’t have a win. Imagine the title winner’s car in a heap for the celebration.

I’ve been writing that since 2004. It is a POINTS “race.” Remember Ryan Newman? It was like that before they tried and no matter how NA$CAR tweaks it there is always the possibility.