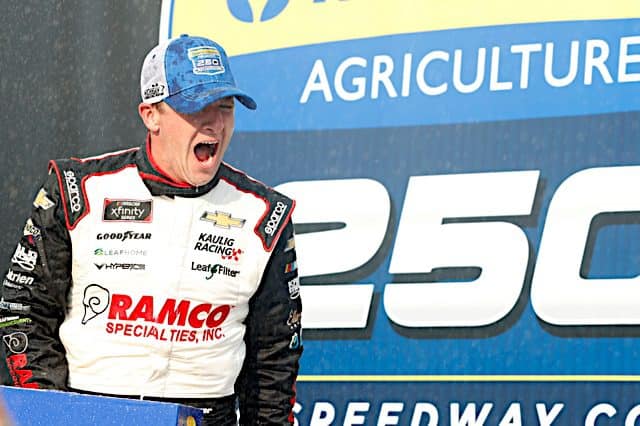 Six days removed from a victory at the Indianapolis Motor Speedway road course in the NASCAR Cup Series, AJ Allmendinger stood on the frontstretch of Michigan International Speedway with a grateful smile on his face as the crowd chanted, “AJ, AJ, AJ,” following his victory in the New Holland 250 in the NASCAR Xfinity Series on Saturday, Aug. 21.

Like last weekend’s Verizon 200 at the Brickyard, the Xfinity race at Michigan was extended by late-race cautions, and Allmendinger was the beneficiary. The series of cautions began when Allmendinger’s Kaulig Racing teammate Jeb Burton ran out of gas and came to a stop yards away from the pit road entrance. With 10 laps to go, NASCAR had no choice but to throw the caution. The race restarted with five scheduled laps remaining, and Allmendinger had taken the lead from Josh Berry before the caution that sent the field into the first overtime was displayed.

Allmendinger retained the lead through three overtime restarts to capture his third Xfinity Series victory of the season. A winless Brandon Jones gave Allmendinger a fight but settled for second. Noah Gragson finished third, Berry fourth and Harrison Burton rebounded from a loose tire in the final stage to finish fifth.

Since Nashville Superspeedway in mid-June, Riley Herbst and the No. 98 Stewart-Haas Racing team have put together a string of finishes that have propelled them into playoff contention. The only hiccup was a 35th-place finish at Pocono Raceway.

The bad luck that plagued them in the spring months appears to have evaporated in late summer. Of course, Herbst has benefited from Michael Annett’s absence in three of the last four races, including Saturday at Michigan. Herbst stretched his lead the point differential over Annett by 31 points, bringing the total to 41 points.

Another driver quietly benefiting from Annett’s absence is Jeremy Clements. He gained 26 points on Annett and now has a 66-point cushion. Clements may only have two top 10s in the previous 13 races, compared to four in the first nine races of the season, but he is putting together solid top-15 finishes. Should he leave Daytona with a solid points day and there not be a surprise winner, he should be in good shape to make the Xfinity playoffs for a second time.

On lap 88, Berry pulled a veteran move as he drove outside of Allmendinger, who had Justin Allgaier to his inside, to take the lead. He was one of the drivers not fearful of the resin (the same substance applied at Nashville Superspeedway in June) in the two outside lanes. Berry pulled away, putting nearly a two-second gap between him and Allgaier. He pitted on lap 108 for his final set of four tires and fuel. Two laps later, Allgaier pitted but for fuel only. Within five laps, the new rubber under Berry’s Chevrolet brought him bumper-to-bumper with Allgaier. He was a lap or two away from retaking the lead when Burton’s car stalled near the pit road entrance.

Jeb Burton’s unfortunate luck spread to Berry, because Berry was likely going to win the race had the caution not come out. Even with little prep time for a track that he had never competed on, Berry impressed with his ability to adapt. Some of his moves may have been more guts than brains. Some nearly did end on the back of a wrecker. Regardless, Berry displayed his talents that have not been shown to this extent thus far outside of a short track.

Allmendinger is a fan favorite, and there are several reasons for that. But Berry had not only the best car but the best drive of the day. It should’ve been him standing in victory lane, not Allmendinger. But that is racing. That’s why you watch until the race until the very end.

However, that doesn’t take away the sting of an unfortunate caution robbing a driver of a win. The good news for Berry is that he’ll get a chance at more victories because JR Motorsports announced this week that Berry will be the full-time driver of the No. 8 Chevrolet in 2022.

A crash on a restart as the field exited turn 2 on lap 36 resulted in several race favorites being eliminated from the race. It was regrettable to see an accident that early in the race. But just like with Berry having a win taken away from another driver’s misfortune, this is racing. That doesn’t make it any less ugly, though.

It originated when fourth-place Brandon Brown got loose under fifth-place Allgaier and slid backward. As he exited turn 2, Myatt Snider also bobbled from an aero push from Ty Gibbs. Snider slid in front of stage one winner Austin Cindric and clipped the front of Cindric’s Ford. Snider slammed into Brown’s driver-side door and spun left, hitting Cindric. The contact was enough to spin Cindric into Daniel Hemric. Their cars were heavily damaged after hitting Bubba Wallace and Brown, who nearly avoided the remainder of the wreck. Justin Haley and Joe Graf Jr. also were involved.

Wallace and Haley’s crews repaired their cars to continue. The other five either retired from the accident or were disqualified by NASCAR for exceeding the time limit on the Damaged Vehicle Policy.

The crash results in yet another ugly day for Brown, who in the past five races has finished 31st or worse in three. After Road America, Brown was only 33 points outside of the playoffs. Five races later, he is 82 points behind 12th-place Herbst.

Jade Buford was the beneficiary of the free pass wave-around during the caution with 10 laps to go for Burton. Buford was running inside the top 20 for much of the race. When he received the free pass, he became the 11th car on the lead lap. Immediately, the thought had to enter Buford and his team’s mind that a top 10 was theirs for the taking.

Despite three more cautions and three more free pass beneficiaries, Buford secured his second career top 10, but his first on an oval. The ninth-place finish was Big Machine Racing Team’s first top 10 as an organization, which made its debut at the season-opening race at Daytona International Speedway. For much of the season, the team has stayed under the radar and gone from battling for top 35 finishes to contending for top 20s. In fact, in the past 12 races, the team has only three finishes outside the top 20, all with Buford behind the wheel

Tyler Reddick and Wallace took part in Saturday’s race. Reddick made his third start with Our Motorsports this season, finishing 16th, one lap down. Wallace replaced Austin Hill in the No. 61 Hattori Racing Enterprises Toyota.

Wallace was involved in the lap 36 caution but didn’t noticeably lose speed. He was a lap down in the closing laps but received the free pass in the second overtime caution, becoming the 13th car on the lead lap. He finished 10th in what was his first Xfinity start since 2017.

“I don’t want to wake up from this dream.” – Allmendinger

I don’t want the dream that Allmendinger is experiencing to end either. There is something about a happy Allmendinger that I’m unable to pinpoint. Whatever it is, I like it.

There are people out there, me included, that were left puzzled when Kaulig Racing announced that Allmendinger would return to the Xfinity Series in 2022 instead of being one of the two drivers in Kaulig’s first full season as a Cup team. But now, I’m no longer puzzled, because NASCAR is healthier with an Allmendinger who enjoys racing. His energy when he wins, and even the passion that pours out in disappointment, is intoxicating.

When he finished second last week at Indianapolis to Cindric in the Xfinity Series, Allmendinger’s passion for racing was clear. Then he won the inaugural Cup race on the Indianapolis road course the next day. His enthusiasm on the frontstretch at Indianapolis was contagious.

During his post-race interview this time around, the crowd began to chant his name. Allmendinger has rapidly become a fan favorite, especially in the Xfinity Series, and he has a personality that makes you want to come back and watch another race.

Am I still disappointed that he is not returning to the Cup Series full time next season? Not at all. I want Allmendinger to be happy, because when he is happy and having a good time, whichever series or form of motorsport he is racing in is benefiting. When a crowd chants your name, feeding off your energy, you are doing something right.

Time’s running out for the drivers looking to break into the 2021 playoffs, and with next weekend the final race of the regular season. The green flag for the Wawa 250 at Daytona International Speedway is at 7:30 p.m. ET on Friday, Aug. 27.

Next week will be a crucial race for playoff bubble drivers Clements, Herbst, Annett and Brown. If any four of them win, that restacks the points for the remaining three regular-season races at Darlington Raceway, Richmond Raceway and Bristol Motor Speedway. But if a playoff-eligible driver further down the point standings wins, the points will undergo a major reshuffling.

A.J. really is living the dream. I would love to see him win the Xfinity championship.