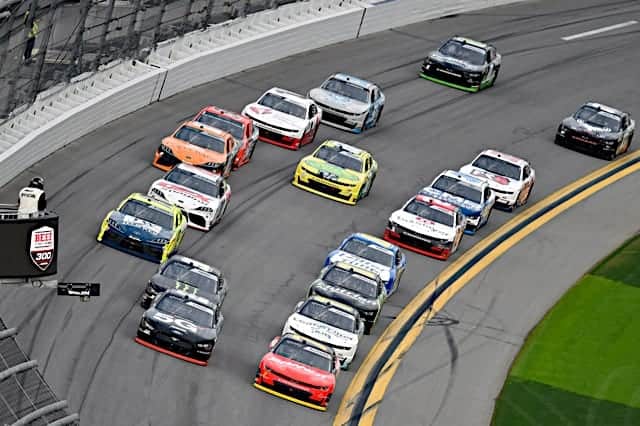 The NASCAR Xfinity Series heads to Florida for a night of racing at Daytona International Speedway. Four races remain in the regular season for the series.

Forty-two cars are entered for 40 spots this weekend. The Nos. 13 and 77 of Timmy Hill and Dillon Bassett, respectively, will not make the race due to no on-track qualifying and a lack of points.

JJ Yeley will make his ninth start of the year for SS Green Light Racing in the No. 17 Figgers Wireless Chevrolet.

A pair of Cup Series regulars will be on tap during this weekend’s race. Christopher Bell will make his second start in the No. 54 Reser’s Fine Foods Toyota. The Norman, Okla. native won his first start for Joe Gibbs Racing at New Hampshire Motor Speedway.

Chase Briscoe also returns to the series to pilot the No. 99 Haastooling.com Toyota for BJ McLeod Motorsports. Briscoe, who won nine races in the series a year ago, will make his second appearance of the season.

Blaine Perkins is set to make his first start since Pocono Raceway in June for Our Motorsports. Perkins will pilot the No. 23 RaceLine Chevrolet.

Sam Hunt Racing welcomes Colin Garrett back to the seat for the third time in 2021. Garrett will strap in behind the wheel of the No. 26 Stillhouse Toyota.

Jordan Anderson will drive his own car for the second consecutive week. Anderson will steer the No. 31 Bommarito Automotive Group Chevrolet for the fourth time this year.

Jason White will make his third start of 2021 in the No. 66 A Game/CMR Construction Toyota for MBM Motorsports. White scored a top 10 in the season-opening race at Daytona in February.

Tim Viens will make his NXS season debut for Mike Harmon Racing this weekend. Viens will pilot the No. 74 Barnes Law Chevrolet.

Mason Massey is scheduled to make his seventh appearance of 2021. Massey will drive for BJ McLeod Motorsports in the No. 78 BRUNT Workwear Toyota.