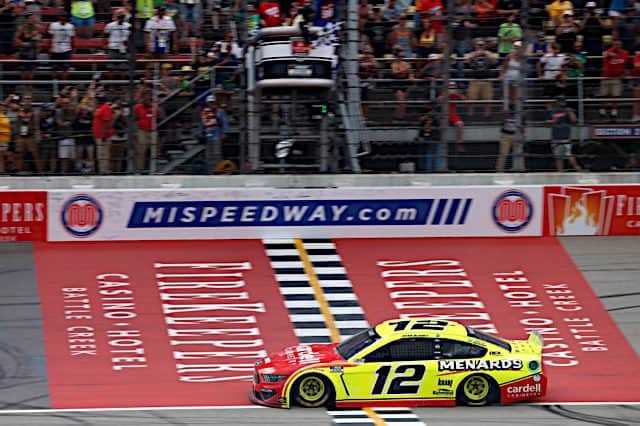 Ryan Blaney is in the midst of what may be the best year of his Cup Series career after winning Sunday at Michigan International Speedway. Blaney, whose father Dave made 473 Cup starts but never finished better than third, scored his second win of 2021. It’s the first time that the High Point, NC native has won multiple times in a season, and it moved him to seventh in the standings, which is his highest points finish to date.

While admitting that the horsepower package in play isn’t his preference, Blaney was able to take advantage of it. He worked the low line when he needed to and did a masterful job of taking away the preferred line from his closest challengers. How much this momentum will help him improve on his current position in the postseason remains to be seen, but he’s certainly setting up to be a contender for the championship.

Ford has had an absolute stranglehold on Cup races at MIS lately. Blaney’s win marked the seventh in a row for the blue oval folks on the two-mile, D-shaped track. Kevin Harvick contributed four of those wins himself, but no Chevrolet drivers have won there since Kyle Larson swept both events in 2017.

Toyota has even less success at MIS in recent years. Matt Kenseth has the only Toyota win in the Irish Hills in the past decade, a 2015 triumph during his stint in the Joe Gibbs Racing No. 20. The highest finishing Toyota in this Sunday’s race? Denny Hamlin ran fifth in another JGR Toyota.

Every driver who finished in the top 10 led at least one lap during the race. It doesn’t seem like a particularly notable occurrence, but you’d be surprised to learn how rare that actually is during a Cup Series event. In fact, it’s been more than five years since the last time it happened.

William Byron was the runner up in the FireKeepers Casino 400, his ninth top-five finish in his last 23 Cup Series starts. Byron, the winner at Homestead in March, had only nine top-five results in his first 110 Cup appearances.

It’s been a breakout year for the young driver in his fourth year behind the wheel of Hendrick Motorsports’ No. 24 car. Byron has never finished higher than 11th in the standings but currently sits fourth. He already has set bests for both top-five and top-10 finishes in a season and will likely keep adding to those stats as we close out 2021.

See also
The Big 6: Questions Answered After the 2021 Firekeepers Casino 400

Matt DiBenedetto is also on a bit of a hot streak. He wound up sixth at the checkered flag, his sixth straight result of 11th or higher. For a team that looked dead in the water after the first month of racing in 2021, the Wood Brothers group has rebounded nicely. Unfortunately, without a win at Daytona next weekend, it doesn’t look like DiBenedetto will earn a second consecutive playoff berth.

Speaking of playoff berths, Austin Dillon seemed like a sure thing for much of the season. After all, while not spectacular, Dillon had been about as predictably consistent as possible. In the first 23 races, he had finished 21st or better a total of 22 times. In the last two races, results of 36th and 31st have nearly sabotaged his efforts. Daytona isn’t a must win, but he definitely needs his teammate Tyler Reddick to have a tough night if there is any chance of the No. 3 being a playoff participant.

As for Daytona, the 400-mile race has become an absolute example of parity. Each of the last 11 editions of the race have been won by a different driver. You’d have to go back to the 2009 version, won by Tony Stewart, before a repeat winner shows up. Truly, it’s not just the 400 either. Daytona as a whole has been anyone’s race for quite some time now. Denny Hamlin is the only driver with more than one visit to victory lane in either race since the summer of 2014. Just the kind of thing you want to hear if you’re in a must win situation to make the playoffs.

Byron and Rudy Fugle make a very good team.
Daytona is a total crapshoot. But Matty has run well on “tapered spacer” tracks, Hamlin seems to really like Daytona as well.
Fix Daytona and Talladega by knocking down the banking and putting the low downforce, hi hp. package in so the cars actually have to be driven.