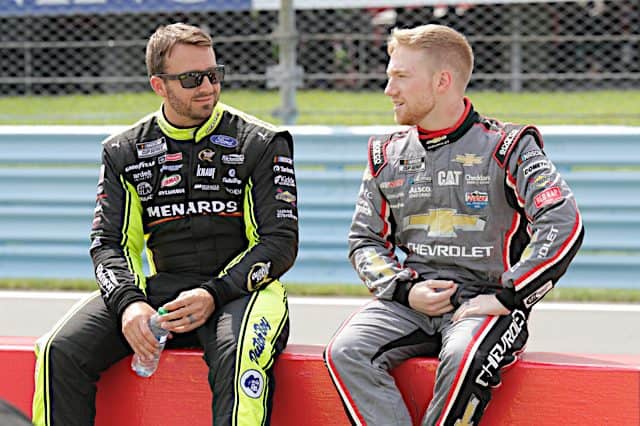 This is it. Crunch time.

Just one more race remains until the playoff field is set for the NASCAR Cup Series. And what could be a more unpredictable place for it to happen than Daytona International Speedway?

Last year, Daytona held the regular season finale for the first time. Several drivers’ playoff dreams were fulfilled while others were shattered, with a first-time winner emerging in the form of William Byron.

Tyler Reddick enters Daytona with a target on his back, since he holds the final open playoff position. Every driver underneath the cutline knows that it’s a true do-or-die situation: knock the Richard Childress Racing driver out or spend the final 10 races without a shot at a title.

We saw Michael McDowell pull off a miraculous upset win in the Daytona 500. Who might have the best chance of shocking the field and taking the final available spot for this year’s playoffs? And which drivers will suffer the biggest falls if they fail to advance?

While Reddick may seem safe to make it in, his teammate Austin Dillon is not.

After crashing out of the last two races at the Indianapolis Motor Speedway road course and Michigan International Speedway, Dillon is left sitting in a 25-point hole behind Reddick. That might not seem far away, but when one point can be the difference, it might as well be close to untouchable.

Dillon has made the playoffs four times in his Cup career, with a best finish of 11th coming in both 2017 and 2020. If he wants to avoid another winless season, Daytona could be the best place for him to get back into victory lane and playoff contention. He does have that prestigious Harley J. Earl Trophy in his collection, you know.

He’s been knocking on the door for a win for the better part of two years. With it being his contract year with Wood Brothers Racing, Matt DiBenedetto has never had more pressure on his shoulders than now.

As he pointed out in his post-race interview at Michigan, DiBenedetto and the Wood Brothers team are on a swing of good runs, finishing no worse than 11th in six straight races. Performance-wise, that might sound good. Problem is, that’s not good enough for him to earn a playoff spot, especially with just one race to go.

DiBenedetto has the car, the team and the skill to put himself into a golden position to win. It’s all about whether he can stay clean and be near the front when the white flag waves. Plus, a race win and a second-straight playoff appearance might even give him the spark he needs to score a top-notch ride for the 2022 season.

Florida native Ross Chastain knows his future is secure next year with Trackhouse Racing Team. But there’s still the rest of this year to get through, and a playoff appearance could help him out immensely.

Chastain is no stranger to having an edgy driving style on the superspeedways. It has both paid off for him and bit him in the rear. He gave Kaulig Racing their very first NASCAR Xfinity Series win in July of 2019 at Daytona. On the final lap of the same race in 2020, he got too greedy and spun leader and teammate AJ Allmendinger, eliminating both their chances to win.

Whatever the outcome may be for this weekend’s race, Chastain is bound to make a spectacular impression on the track. He’ll likely either get to do a watermelon smash on the finish line after winning his way into the playoffs or crash out trying.

With a handful of laps to go in last year’s regular season finale, Erik Jones was in the thick of the lead battle. Next thing he knew, he was involved in a multi-car wreck that eliminated him from championship contention.

Since his departure from Joe Gibbs Racing, Jones has been trying to get his groove back in the Cup Series with Richard Petty Motorsports. Through 25 races, he has scored three top 10s with the No. 43 team, compared to eight top 10s at this same point last year.

Daytona has historically been a good track for Jones. His first career win came in the 2018 Coke Zero Sugar 400. He has a best Daytona 500 finish of third, coming in 2019, and he won the 2020 Busch Clash, surviving seemingly endless carnage to do so. Richard Petty’s most recent win as a car owner came at Daytona in 2014 with Aric Almirola.

If there is a time and place where Jones and Petty could shine again, it’s this coming Saturday night at Daytona.

Two weeks ago at Indianapolis, Rookie of the Year contender Chase Briscoe suffered as much bitter of a defeat as one could have, especially at his home track. Of course, the best medicine for that would be an upset win and becoming a surprise addition to the playoff field.

Briscoe currently sits 22nd in the point standings with three top-10 finishes and only one DNF due to a crash. For a rookie season season, those numbers are okay. But with Stewart-Haas Racing having such a gloomy year (and Almirola getting the team’s only win to date), it might taint how Briscoe will remember the 2021 season … unless that first breakthrough win comes to him.

Briscoe has consistently performed well on the superspeedways in the Xfinity Series. His teammate Cole Custer sealed up the 2020 Rookie of the Year award by coming in clutch with a win at Kentucky Speedway. Daytona could be another chance for Briscoe to do the same and redeem himself from Indianapolis. Perhaps he can join the likes of Greg Sacks, Jimmy Spencer, John Andretti, Greg Biffle, David Ragan, Jones and others on the sizable list of drivers whose first Cup wins came in the Coke Zero Sugar 400.