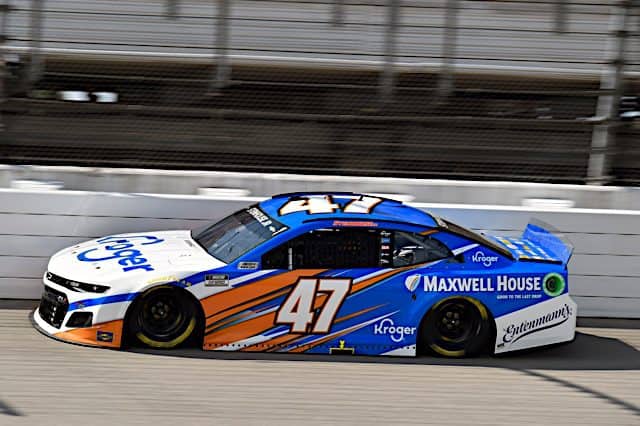 Ricky Stenhouse Jr. is in the midst of one of the best seasons of his career.

The driver of the No. 47 Chevrolet for JTG Daugherty Racing has finished outside the top 20 just six times through 25 races and posted his 13th top-15 finish of the season Sunday (Aug. 22) at Michigan International Speedway by coming home 12th.

As Stenhouse prepares for his final shot at a 2021 playoff run in Saturday night’s (Aug. 28) season finale at Daytona International Speedway, it’s hard to ignore the turnaround he and his team have made on the heels of eight DNFs just a season ago.

“We just sat down this offseason and talked about being more consistent than what we were last year,” Stenhouse said in a Tuesday (Aug. 24) phone interview. “We felt there was opportunities to be consistent, just run up front and have that opportunity.”

The most critical difference, he said, has been reminding himself not to ask more of the car than it can produce.

“I feel like I’ve put the car in better positions throughout the race, which has definitely been beneficial,” Stenhouse said. “We haven’t tried too many tricks in our racecars. We’ve been trying to be really consistent with that, just making sure that we just put the best possible racecar on the racetrack, and so it’s definitely paid off.”

Most numbers favor Stenhouse and the work he’s done to improve his results. His 18.4 average finishing position is his best since posting a 17.1 average finish in 2017, the same season he collected his first career wins. He’s also posted four DNFs this year, only one of which was crash related. Of his eight DNFs in 2020, seven were due to wrecks.

Yet despite those positives, his top-10 tally is the currently the lowest of his career, posting just two in 25 races: second at Bristol Motor Speedway’s dirt race and sixth at Nashville Superspeedway. During his career-best season in 2017, Stenhouse netted four top fives and nine top 10s.

For the record, he’s right. Of his 13 top-15 finishes this year, seven of those have been results of either 11th or 12th. There’s no doubt Stenhouse wants more out of his equipment, but he’s also learning to take what the car is giving him.

“We finished 11th at Indy [Indianapolis Motor Speedway road course] the other day, and we needed one more spot for a top 10,” Stenhouse said. “But I would not like to trade a few of those for top 10s and then have disastrous finishes. I like how consistent we’ve been.”

Ahead lies the final opportunity for Stenhouse, the 2011 and 2012 NASCAR Xfinity Series champion, to win his way into the playoffs. Stenhouse’s only two Cup Series victories have come at Daytona and Talladega Superspeedway. Sitting 18th in points and 173 points behind the cut line, a trip down victory lane is his only chance at a postseason berth.

With the wind seemingly in his sails, Stenhouse believes momentum can do a lot for a team even entering the unpredictability of a superspeedway race.

“You never want to go into a racetrack with a good opportunity [but] not with momentum, so I feel really good about where our race team is right now,” Stenhouse said. “We’ve been working really hard on our racecars, especially this one for this week, and the guys have been working on it for quite a few weeks now – massaging it, making sure that it’s going to be the best racecar that we can have there. That makes me excited and looking forward to strapping in on Saturday with it.”

Stenhouse is expected to be a legitimate contender come Saturday night. That doesn’t add any pressure, he said, nor does it impact his own expectations.

“For me, the biggest thing is just making sure that we are there at the end of the race and put ourselves in position,” Stenhouse said. “This race last year, we got caught in a wreck and rewatching it and thinking back about it, I was kind of mad. I felt like I could have done a few things different to make sure we didn’t get caught up in that so that you’re around when it really matters.”

Stenhouse’s strategy at superspeedways has typically been to maximize stage points throughout the course of a race then be there at the end. On Saturday night, stage points won’t do him any good.

“Going into this weekend, I think the mindset has to be different because you’re really only there for one reason, and that’s that final stage,” he said. “And so doing something early on in stage one or stage two that gets you caught in a wreck and ruins your opportunity to win the race, that’s not exactly how you drew it up. So you know, just trying to put everything together and not trying to do too much.”

See also
The Big 6: Questions Answered After the 2021 Firekeepers Casino 400

Stenhouse admitted seeing other guys beneath him in points like Michael McDowell and Aric Almirola jump into the playoffs with wins of their own stung, but his focus remains on his own chances now.

“It takes a little bit of wind out of yourself knowing that those are two spots that are taken away as far as points go coming down to it,” Stenhouse said. “But at the same time, it gives you that opportunity. Hey, Daytona’s still here. We have a shot to go do the same thing. So for us, we see it as an opportunity this weekend, and we’re looking forward to hopefully pulling the upset off and making the playoffs.”