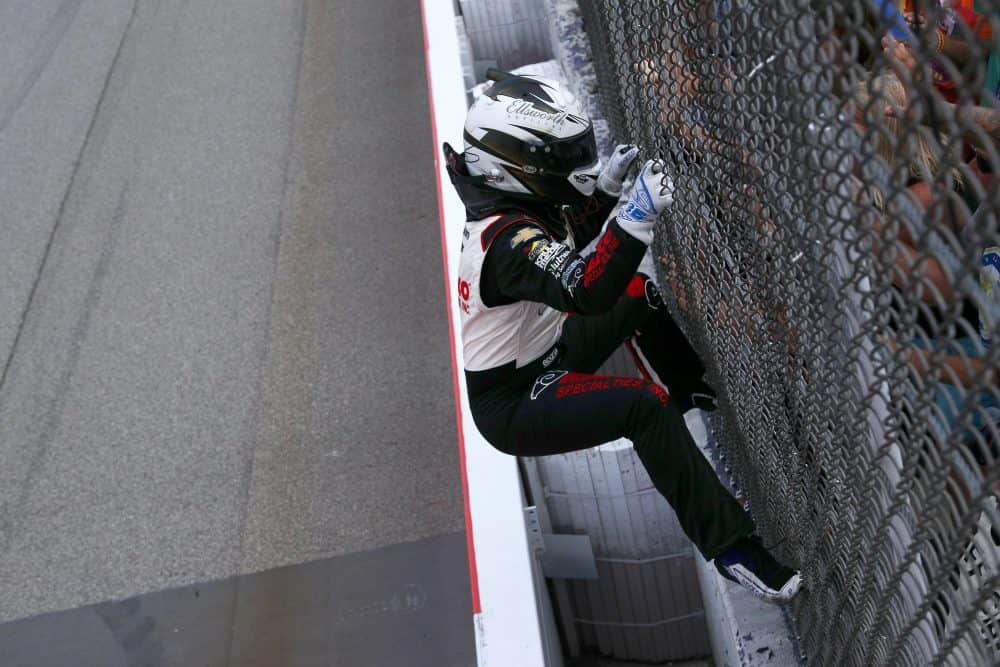 Routine can at times be a bad thing. The more you get used to something, the more common it can be. The novelty wears off.  The initial newfound excitement can fade.

Drivers aren’t immune to this. If you get used to winning, some competitors come to expect it and the emotion becomes nearly robotic at times. When that happens, it’s easy to label a driver’s personality as being as exciting as that of a piece of paper.

But there are other drivers, those who simply have the excitement of being able to race, and it shows in many ways, those that could be mistaken as a kid in a candy store.

There’s no question that AJ Allmendinger falls into the latter. Obviously, winning races like he has done this year for Kaulig Racing does not hurt. But even when he wins races, there’s no even-keel emotion.

Allmendinger comes across as a guy that knows how fortunate he is to be able to race and do so successfully at the same time. There’s no scripted victory celebration from “The Dinger;” the way that he reacts feels as organic as it could possibly be.

There’s a good reason for that. Remember, Allmendinger may as well have been damaged goods after losing his ride at Team Penske in 2012 following a failed midseason drug test and languishing at JTG Daugherty Racing.

Sometimes, when a Cup driver ends up back in a lower series, it can be the first step toward fading into the sunset. Not so for Allmendinger, who has even now led Kaulig’s surge to the Cup Series with a win in NASCAR’s top division on the Indianapolis Motor Speedway road course.

“I will do whatever they want me to do,” Allmendinger said when asked about the prospect of racing full-time in Cup again. “I’ve told them that from day one. Whatever they feel like I can help raise the organization and help push it, I’ll do that, whatever that may be. Whatever program we’re on, like I’m enjoying it.”

“I don’t want to wake up from this dream,” Allmendinger said after Saturday’s win at Michigan.

Frankly, who could blame him for having that thought?

It really reminds you a lot of the Carl Edwards we saw when he came out of nowhere for his career-altering Atlanta Motor Speedway win in March 2005. And it even harkens back to Darrell Waltrip when he subbed for Steve Park at Dale Earnhardt Inc. and you could tell that ol’ DW was straight-up having fun.

That’s exactly what Allmendinger appears to be doing right now, and it’s straight-up fun to watch.

And if having fun continues to translate into race victories, it’ll be hard to have a conversation about championship favorites in the NASCAR Xfinity Series without referencing Allmendinger and Kaulig Racing. Oh, and given what Kaulig Racing has done, it’s hard to discount the title-contending hopes of Justin Haley and Jeb Burton, as well.

In short, AJ Allmendinger has made racing fun again, and everyone tuning in to watch the NASCAR Xfinity Series is all the better for it.

What To Watch This Weekend

For various reasons, Friday night (Aug. 27) could be the most exciting race of the season. The racing under the lights tends to narrow the racing groove a bit, for whatever reason at Daytona International Speedway, making the racing even more white-knuckled.

With the window to get in the Xfinity Series playoffs closing, this could make or break some of those hopes. The highly unpredictable nature of racing at Daytona could also solidify playoff hopes depending on the race winner.

Riley Herbst, Brandon Brown and Noah Gragson could separate themselves off the playoff bubble with a win … or could someone such as Ryan Sieg or Tommy Joe Martins storm to the front late and turn the playoff picture sideways?

Daytona is unpredictable and that factor makes Friday one of the biggest must-watch races of the season in the NASCAR Xfinity Series.