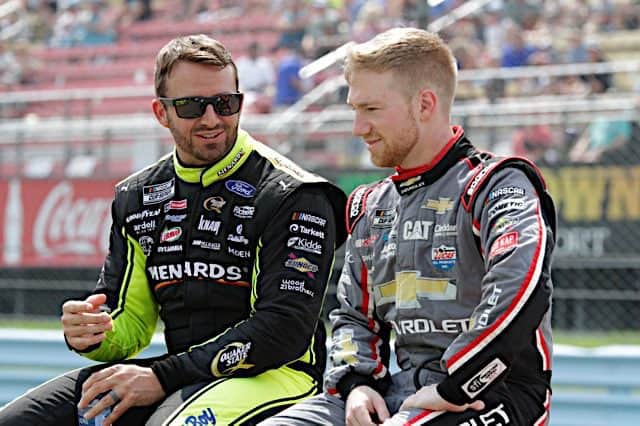 After all, that’s usually the case at the season-opening Daytona 500, when the pre-race Duels set the lineup and a certain number of cars (four in 2021) are left on the sidelines come the big race on Sunday by not racing their way in.

That drama and intrigue is back for the summer Daytona race, but it’s a little different. This time, it affects the 16-driver playoff field for the Cup Series and who’ll come out on the other side still with a chance to win the championship in November at Phoenix Raceway.

What makes this elimination even easier to follow is that there’s only one spot up for grabs.

Thanks to an abundance of different Cup winners in 2021 so far, 15 of the 16 spots are already filled, 13 via victories and two more, Denny Hamlin and Kevin Harvick, due to having enough points that they’re mathematically unable to be knocked out.

The complication comes in the form of eligible drivers. In all, 15 have a shot of making the playoffs in the 40-car field (meaning 10 are only there to play spoiler; more on them later). Two could do so without winning the race. The other 13 need a win to make it in.

And here’s the problem: there’s an argument to be made for all 15.

Yeah, seriously. I came into this article thinking, shoot, there’s no way everyone who’s eligible to make the playoffs actually has a shot of doing so. Let’s weed out the pretenders and focus only on those with a bona fide chance.

But the 15-driver pack features four former Cup winners at Daytona: Ryan Newman, Erik Jones, Austin Dillon and Ricky Stenhouse Jr. That alone is a plus in each of their favors, especially considering that all four have either recently won at the track or have come extremely close to doing so (see: Newman) in the last few years.

OK, so four down, 11 to go. None get added when you throw Talladega Superspeedway into the equation (Stenhouse is the only Cup winner there of the group). How about lower series?

Couple hits here. Tyler Reddick and Ross Chastain both boast Xfinity Series wins at Daytona, and while neither has had that success translate to the Cup level just yet, it’s not unreasonable to think they could this weekend. Reddick, after all, always seems to find his way to the front at some point at superspeedways, as do Richard Childress Racing cars in general. And Chastain’s earned a reputation of being fairly daring at Xfinity superspeedway races, a trait that has popped up a few times in his maiden Cup season with Chip Ganassi Racing as 2021 wears on — and with virtually nothing to lose given that his only chance at making the playoffs is a win and he’s already got a ride lined up for 2022, it’s expected Chastain won’t hold anything back.

As for the Camping World Truck Series, Reddick’s the only one of the group with a Daytona win, which lends credence to his standing as a contender this weekend. He’s also the lone driver with an Xfinity victory at Talladega, while none of the 15 have won at the track in the Truck Series.

That puts us at six out of 15. Closer, but still lagging behind.

Chris Buescher‘s got to be in, though. Despite no superspeedway wins, he’s racked up three top fives and five top 10s in 11 Daytona Cup starts, and his chariot Sunday is the No. 17 for Roush Fenway Racing, which had quite the superspeedway streak when Stenhouse piloted it. RFR may not be the powerhouse it once was, but it’s difficult to count it out when it comes to Daytona and Talladega.

Bubba Wallace has a similar top-fives-to-starts ratio — two top fives and two top 10s in eight Daytona Cup races. Bear in mind, too, the speed the then-brand-new 23XI Racing showed at the track earlier this year before Wallace was taken out in an 11th-hour crash that relegated him to 17th. He doesn’t have the pedigree of Buescher, sure, but he’s found his way toward the front at Daytona enough that saying he has no chance feels like a stretch. Plus, the superspeedways are often hotbeds for first-time winners.

Halfway there. How about the Stewart-Haas Racing boys next?

Chase Briscoe‘s rookie Cup season hasn’t been dazzling, Cole Custer‘s sophomore run less so. The former has shown superspeedway prowess in the lower series, though; despite a goose egg in the wins column in Xfinity, he has two top fives in four starts.

I wouldn’t want to bet against SHR at a superspeedway, anyway; though Aric Almirola‘s 2018 Talladega win is three years removed, Harvick scored a Daytona 500 top five earlier this year and followed it with another top five at Talladega, joined by Custer in the top 10. Despite SHR’s overall struggles compared to previous years, the four-car organization is still enough of a powerhouse that its horsepower can carry someone from its fleet to the win if they find themselves in the right place on the last lap.

Then there’s Matt DiBenedetto. Limited lower series experience at the track but 25 combined Cup races at Daytona and Talladega that’s resulted in a top five and four top 10s. Not too shabby at all, and for a driver who’s auditioning for a job next year at this point, he’s fully aware a win would go a long way — and he’s got the equipment to do it, given Trevor Bayne’s Daytona victory with Wood Brothers Racing a decade ago.

Someone else possibly trying to land a job for 2022 is Ryan Preece, whose status with JTG Daugherty Racing for next year is unknown. One top five and four top 10s are also his stat at Daytona and Talladega in the Cup Series, but he’s done it in less starts — 10 to DiBenedetto’s 25. He also counts Stenhouse as a teammate at JTG; if they can hook up, the Nos. 37 and 47 certainly have a shot at the checkered flag (as long as they don’t pull a Kaulig Racing in the Xfinity Series and wreck each other to get there).

That leaves us with the three who are the toughest to argue an outcome ending in a win, but bear with me here.

Trackhouse Racing Team’s superspeedway program is still relatively unproven. Daniel Suarez wrecked out of the Daytona 500 after 13 laps but seemed stout enough. Talladega was iffier — 23rd when all was said and done — but the No. 99 had speed and kept the draft, showing here and there that it could run with the leaders. In team co-owner Pitbull’s home base of Florida, Suarez could be pushed to wheel the car to new heights, earning Pitbull and Justin Marks a playoff berth in its first season.

Corey LaJoie has been quietly strong at Daytona especially throughout a career in lesser-funded rides, boasting three top 10s in nine Cup Daytona starts. And his ride Sunday? The No. 7 for Spire Motorsports, who pulled off the upset in the Daytona summer race with Justin Haley in 2019.

That leaves Anthony Alfredo, the wettest behind of the ears of the group with just six national series starts to his credit at Daytona and Talladega, earning one top 10 in an Xfinity Talladega race.

But if there’s something we’ve learned in the last decade-and-a-half at the superspeedways, it’s to never count out Front Row Motorsports when all is said and done. Just ask Michael McDowell earlier this year.

With all that in mind, I’m not willing to count out a single driver come Sunday. Dillon and Reddick, of course, have the best shot given that they can conceivably race their way in on points without a win — something that’s altogether possible since not only is a win from the 15 already locked in a definite scenario, so too is one of the aforementioned 10 racers unable to make the playoffs winning the race.

I mean, look at Kaulig, who spoiled the party at the Indianapolis Motor Speedway road course with an AJ Allmendinger win; the No. 16 is back this weekend with a hungry Kaz Grala. Former winner Haley is back in Spire’s No. 77. Landon Cassill‘s got nothing to lose in his first Cup start since 2019, driving for a Gaunt Brothers Racing team that often finds its way to the front at Daytona and Talladega.

Myriad variables abound. Stay in the lead draft and you’ve got a shot. This one’s going to get dicey, and with just one playoff spot up for grabs, it’ll be anything but dull.